The third event of the Los Angeles Karting Championship took place on April 29-30 at the CalSpeed Karting Center. The Fontana, California facility welcomed over 180 entries for the event, which served as the third step in the 2017 championship chase. It served for many as a warm-up to the Superkarts! USA Pro Tour SpringNationals, while others put themselves in a better position toward the title fight. Three was the magic number throughout the third event of the season, with many classes welcoming the third different winner on the year. 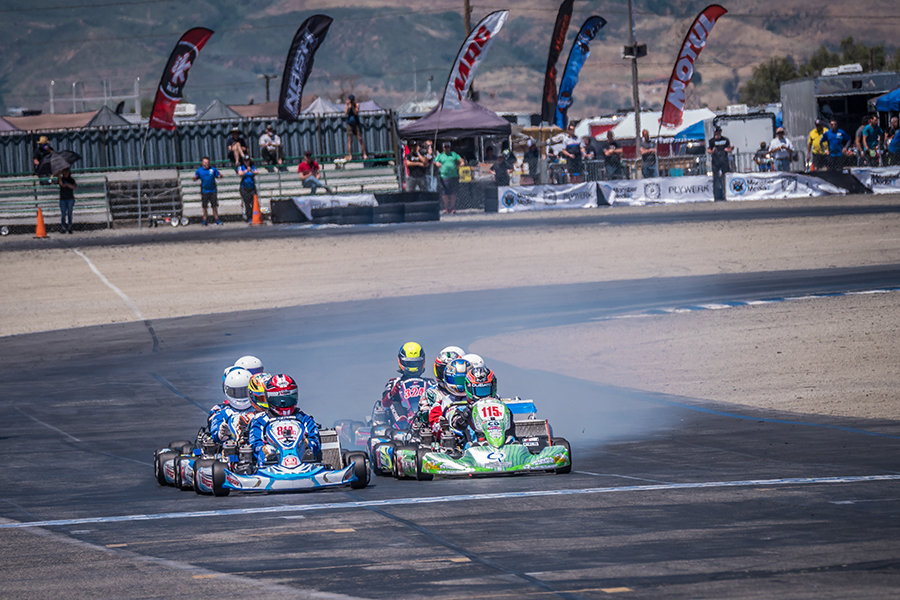 Kasey Gillis became the third different winner on the season the Acceleration Kart Racing Mini Swift class, the largest of the event with 20 drivers. Two time runner-up Cole Morgan set the pace early, leading the qualifying session and winning the Prefinal. Both Morgan and Gillis, who started toward the front, slipped down the order at the start with Round Two winner Carson Morgan leading the way. Morgan led most of the race with Cole and Gillis charging back. On the final circuit, Gillis emerged as the leader, scoring the race win. Both Morgan brothers slipped out of the top-five, with Aden Dodge and Steven Grafton landing on the podium. Round One winner Chance Gibson and Kai Sorensen rounded out the top-five.

The Tru Tech Racing Engines Micro Swift division was nearly as large with 16 competing on the day. Logan Toke made it look easy, sweeping the action for his second straight victory. Toke led from qualifying to the final checkered flag on the day, building an 11-second advantage over the field in the 18-lap Final. Enzo Deligny and AJ Zarcone joined Toke on the podium with Parker DeLong and Austin Manka placing fourth and fifth.

One driver better – 17 total – made up the Ryan Perry Motorsport X30 Junior Expert field. Oregon driver Jacob Hudson was able to stop the win streak by Joseph Daniele. Hudson scored the Prefinal win and lead all 18 laps of the Final for the victory. Trey Brown won the fight for second over Alan Tang. Daniele ended up fourth, just ahead of Jalen Mack. Bentley Adams became a first-time winner in the Baldozier Racing X30 Junior Novice class, which has now seen three different drivers on top of the podium in the first three races. Cash Baxley and Ricardo Gutierrez completed the podium.

The Formula Works Honda Kid Kart division has split up into two divisions with Expert and Novice categories. Josh Antonino took home a third straight victory in the Expert class, joined by Brayden Welter and Truly Adams on the podium. Keagan Kaminski took his first victory in the Novice class, beating Round Two winner Johnie Stamps and Rayce Welter. Carson Morgan is the third different winner on the season in Fleming Racing Engines Junior 1 Comer. Morgan won the Prefinal and led all 18 laps for the victory. Round Two winner and top qualifier Cooper Hicks placed second with Hunter Hicks completing the podium.

Mack Motorsports 206 Senior class welcomed its largest turnout of the season with 14 drivers. Veteran karter Matt Johnson won a great battle to claim his first victory of the season. Johnson was able to outrun the 14-driver field in the late stages of the main event. John Crow won the battle for second over Jake Hood with top qualifier Race Liberante and Alyssa Yauney making up the top-five.

Keawn Tandon made it two straight in the ultra-competitive Musgrave Racing Company S3 Novice Stock Honda category. Tandon swept Round Three, establishing a nine-second advantage at the checkered flag. Prescott Campbell edged Blake Dunkleberger for the runner-up spot ahead of Round One winner Jacob Pope and Kent Hatada.

It is now three straight wins in the PKS Kart Supplies S4 Super Master Stock Honda division for Kalvin Chen. Sean Bond was runner-up for a second straight event, with Warren Kindberg earning a third podium finish of the season. Carl Lewis and Steve Donia made up the top-five. Glen Lennon returned back to the top step of the podium in Mike Manning Karting X30 Master class. The Round One winner was able to fight off Ron Jenkins for the victory. Chuck Sanford was third with top qualifier Tony Rossetti coming one lap short of the finish in the main event.

Eric Slivkoff took advantage of late race issues to score his first victory in the Motorsport Development Group X30 Intermediate division. Brenden DeLorto and Brendon Cramer – both former winners on the season – led for much of the day. Cramer took fast time in qualifying while DeLorto earned the win in Prefinal. The two went back and forth in the Final, and the two hit the sidelines with two laps to go. That allowed Slivkoff to drive to the victory. Jonathan Silva ended up runner-up ahead of Kyle Babida, Michel Manning and Matias Lopez. Lauran Adams became the third different winner in the Baldozier Racing X30 Novice class. Adams swept the day for her first class victory. Yuki Tanaka and Ian Bland filled out the podium.

Jake Drew emerged as the top driver in the 2 Wild Karting X30 Pro main event, becoming the third different driver to win on the season. Colby DuBato set fast time in qualifying while Charlie Jafari led the way at the end of the Prefinal. Drew took over the lead from Jafari early on in the main event, leading the remainder of the race for his first victory on the year. DuBato and Jafari completed the podium with Anthony Sawyer and Chance Skaufel placing fourth and fifth.

Other winners on the day include:

The Los Angeles Karting Championship is in action this weekend (May 20-21) at the CalSpeed facility.