A bit of history

For those who do not know me, I have been involved in karting since 1983, both as a competitor and within the industry.

I was employed by KartOz Magazine (the original one that closed in 2004, not the rag that subsequently hijacked the title) in the position of Editor for three years (Sept 1999 to Sept 2002) after which I decided to become a part-time contributor and set up business in IT Training (see WicksTechnic.com). 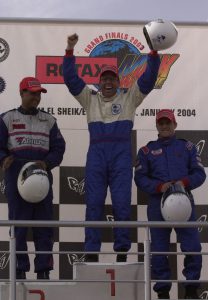 My on-track karting highlight was competing in and winning the 2003 Rotax MAX Challenge Grand Finals in the Masters division, and finishing the World Final 8th outright in Senior MAX. This was held in Egypt in January 2004 (pic, right).

In addition to a lot of karting in many different classes, I’ve also done quite a bit of car racing – see the racing section on WicksTechnic.com.

With the unfortunate demise of KartOz in 2004, Australia’s karting media consisted of one printed monthly publication – and very little else. Later that year, and after teaching myself about websites and HTML, KartSportNews went online with some results, photos, news and information.

To say the subsequent interest and feedback was positive would be a massive understatement. The site quickly established itself as a primary point of reference for Australian karters and industry alike.

How things are today

KartSportNews continues to be the sport’s main independent source of news and information. Australian content is the main focus, but international events, products and news are also covered. The site gets updated virtually every day.

KartSportNews is not associated with any other publications or websites. Importantly, we’ve not aligned with any of the governing bodies either – that allows us to cover ALL types of competition kart racing, regardless of who runs it.

Good Luck on the race track.