From the seats at turn 9 to the Canteen vantage point at turn 5, everyone watching was cheering and applauding as the trio of Anthony Alessi, Eddy Cooper and Blake Tracey completed their cool down lap and entered the pits.

When the Cadet 12 final began, boy, did it begin, with things instantly reaching a whole new level.

Last month’s winner Anthony Alessi put the hammer down at the start, but this month, Blake Tracey, always determined, was not going to let him get away. As if this wasn’t enough excitement, Eddy Cooper, often running his own race in P3, hunkered down and chased the two front runners down with a hunger that was insatiable. While Anthony and Blake created a nail-biting atmosphere for the spectators as they interchanged the lead – Blake taking the front from turn 4 and turn 5, then Anthony retaking it back on turn 8 & 9 with each lap – Eddy pushed with all his might to stick with them.

Similar races had taken place in Heat 1, Heat 2 and Heat 3, but rounding the last corner in the Final, it was the challenge Blake was placing on Anthony in an attempt to take the lead that held everyone’s attention and led to the gasp of excitement as Eddy stormed through to take 2nd place behind Anthony with Blake ultimately finishing in 3rd. Further back, Ryan Taborsky and Nathan Hogg ran a beautiful race in amidst all this excitement, maintaining their positions and keeping everything clean and on track.

The cadet 9 front-runners battled in a similar fashion, with last months victor Noah Dixon doing everything in his power to pass the seemingly unstoppable Sol Alessi, while James Brett pushed to keep the pair in his sights. He struggled with this until the final, where he got a good start, but accidently collided with Noah, thus spinning the latter off into the grass. He continued chasing until Sol, out front leading the race, accidentally spun, leaving James to storm through and take the lead. Not only that, James then managed to hold Sol off until the end, achieving the win in the final, and third overall for the day. 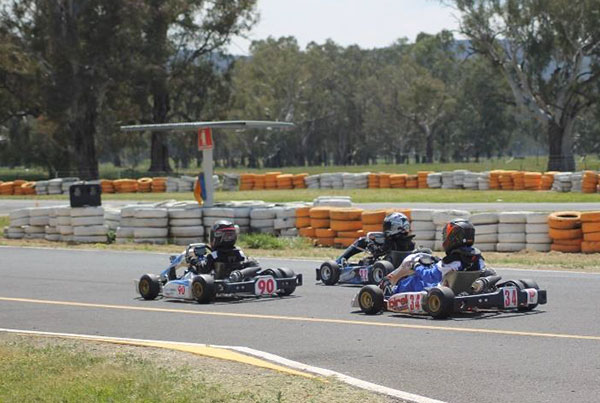 In the other categories, Juniors Jordan Chapman and Dylan Muller enjoyed some close racing in heats 1 and 2, before Dylan pulled away in Heat 3 and the Final to take overall victory. Meanwhile in the TaG 125 Restricted Light class, Kevin Mullavey stuck to the rear bumper of Ron Lonsdale to try and snag victory, but failed to make his overtakes stick until the final. 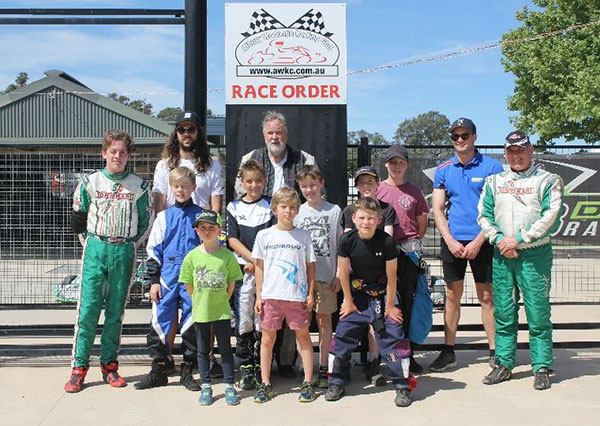 Then we come to the senior class of Restricted Medium, who enjoyed a four-way fight for the top step of the podium. Steve O’hare dominated by winning all three heats and the final – though the last one was not by much over Blair Van Ree. Further down, Herman Van Ree and David Brett came together in heat 3, resulting in Dave’s chain coming off. After fixing this issue, the pair worked on hunting down the speedy front-runners.

Overall, the day was filled with excitement and hunger for the lead. Was it the expert guidance and advice of Karting Champs Dave Sera and Daniel Rochford that lead to such incredibly close racing? 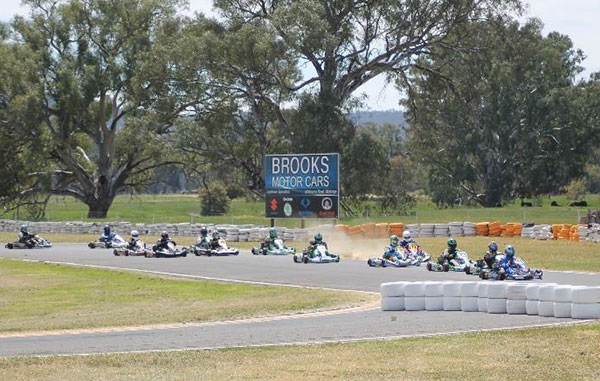 Some might say that all the work the pair did with some of our members on the Driver Training Day on the Saturday before, really paid off. Personal Best times were coming down left, right and centre. It certainly has to be said that it seemed especially beneficial for all of the Cadets, bunching them up and providing even closer racing. So, many thanks must go out to the boys for the Pro Advice and Race tips; not only for the competitors, but their pit crews as well. Special thanks also to Christie Reynolds for organising such a great day and the fabulous catering.

Well done to each and every one of the competitors in the October Club Day, from the smallest Cadet 9’s right through to our most senior of members. Your racing was thrilling to watch and we now look forward to the November Club Day, where we hope to see even more of this incredible calibre of racing.