After Belgium, Sweden and Austria, the Rotax MAX Challenge Euro Trophy started for the last race in Germany from September 28 to 30, 2018: In the modern Prokart Raceland of Wackersdorf, the championship, renamed about a year ago, completed its first season successfully.

Europe’s Rotax elite fought on the 1,190-meter track in Bavaria not only for the last victories of the year, but also for two outstanding championship titles: After Dutchman Mike van Vugt (Juniors) and Martin Mortensen (DD2) from Denmark who took the overall victories in their categories at the last round in Austria already, the classes of Seniors and DD2 Masters were still looking for their new heroes. The delegation for the Rotax MAX Challenge Grand Finals in Brazil had to be complemented. In addition to the two designated champions, seven other candidates could hope for a ticket to the Grand Finals in Brazil taking place November 24 to December 1, 2018.

James Wharton (FA Kart) set the benchmark in qualifying in the 30 man field of the Junior grid before the Australian had to rank behind the designated champion Mike van Vugt (JJ Racing) after the heats. The Dutchman underlined his exceptional position in the first final, which he won just ahead of his cpmpatriot Dani van Dijk (Pierre Redeker) and James Wharton. In the second race Mike van Vugt could not tie in with his performance. Due to an unsportsmanlike action he received a time penalty and fell back to position twelve. Meanwhile, James Wharton won the race ahead of Dutchman Robert de Haan (GCW De Haan) and Poland’s Jerzy Spinikiuewicz (Uniq Racing).

When it comes to the daily ranking, James Wharton took the victory while Mike van Vugt and Robert de Haan followed behind. With his success in Wackersdorf, James Wharton also won the vice champion title in the end. Third place in the championship went to the Dane Mads Riis (RS Competition).

33 seniors competed in the season finale and saw a dazzling Hannes Morin (Dan Holland Racing). The Swede took his title chances without compromise: After he had taken the pole position, he celebrated an impressive double victory into the race, which not only secured him the first place in the daily classification but also brought the overall victory. His title rival Mick Nolten (GKS Lemmens Power) did not have much to oppose. The Dutchman finished only seventh in the first final and was disqualified in the second race due to a technical issue. Nevertheless, he could prove the second place in the championship.

The early crowned DD2 champion Martin Mortensen (RS Competition) underlined once again his outstanding talent in Wackersdorf. After the best time in qualifying, he experienced a setback in the heats, which threw him back in the ranking to a position in the middle. During the main races he pushed back powerfully: With victories in both finals the Dane secured the day’s victory. Behind him, the Pole Piotr Wisnicki (Wyrzykowski Motorsport) and the Finn Ville Viiliainen (JTl Racing) finished second and third on the podium. In the championship, Germany’s Maximilian Fleischmann (FM Racing) had reason to cheer. Despite a mixed weekend in Wackersdorf, he secured the vice title. Third place went to the Austrian Daniel Machacek (VPDR).

The Pole Slawomir Muranski (Wyrzykowski Motorsport) was in control of the DD2 Masters. He won both races thus securing both, the event and the championship victory ahead of the Austrian Manuel Tenschert (Daems Racing). The podium of the daily rankinig was complemented by Roberto Pesevski (KSCA Sodi Austria Team). In the championship, the Belgian Christophe Adams (Sodi) took third place. 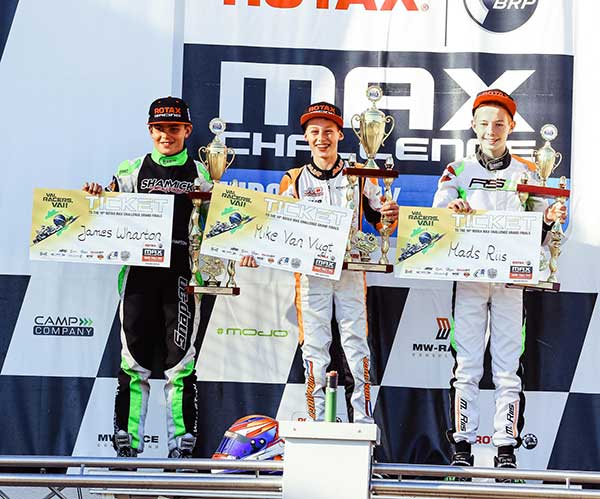 With the swing of the last chequered flag, the first season of the Rotax MAX Challenge Euro Trophy came to an end. Over 200 participants from more than 30 nations took part in the four events of the season and provided a balanced competition with exciting racing.

“Developing a new karting series is always a risk, but the feedback from everyone involved was great, so I would like to thank all drivers and teams for the confidence and I am inviting everyone to join the 2019 RMC Euro Trophy,” says Meik Wagner, organizer RMC Euro Trophy and owner of Camp Company GmbH.

The schedule for the second season of the RMC Euro Trophy has been finalized: The kick-off will take place from April 26 to 28, 2019 in Wackersdorf (GER), before the second round will be hosted from May 31 to June 2, 2019 (venue to be announced). The second half of the season will begin in Kristianstad (SWE) from July 12 to 14, 2019 and the final race is scheduled September 6 to 8 in Genk (BEL).