I have to say as a commentator who’s seen many many races and called them at  multiple tracks over Queensland and NSW, I have never in 4 years seen racing quite like this! It was magnificent and worth losing the voice over!! Unreal stuff and quite honestly Kev “THE NOISE “ Davies even struggled to hold his s**t together – it was that good!

Unbelievable battles all day with anyone from 10 able to win the day. Eventual winner on the day was the Ormeau flyer Welzie (Jack Wells) just getting the better of the lightning quick Ethan Feather. Lachlan Platten did a fantastic job bringing home third on the day. Stand out performers on the day also were Scott, Suffolk, Santin, Govoni, Thompson, Bowen and little Alice Buckley!

An outstanding display of driver skill from “cool hand” Luke Pink, just getting the better of Tommy “the hitman” Cooper who went the wrong way with a couple of set up changes. Close in third and equally in form all day was my favourite “pikey” Oscar Conley. Great battle for fourth too between Conner Roberts & the “rockstar” Brady Mitchell! Williams, Alford & holeshot Sampson battled all weekend for 6th, 7th & 8th.

An absolute show of outright speed from Jace Mathews eventually won him the weekend in the #74 kart but it was the hard charging Marc Tulloch that very nearly caught him on points with his win in the final. Adam Mercer also gradually got the kart on rails with an excellent 2nd place in the final to secure 3rd overall. An outstanding race weekend for the minor placings with Jurczak, Rudd & Marcon all in the mix!

It was Jarad Neinert who took the win in Heavies with a faultless performance and Pingy Alastair that is unfortunately suffered a blown engine and had to retire.

The “blingyman” Dale Zimmerman come out on top with a show of driver skill no one could match for consistency! Bailey Sagaidak had a couple of dramas but managed to do a fantastic job and secure second. It was Robbie Reid who brought it home third and he’s getting faster by the race meet is the #4 driver! “Maldonado” Daley Martin, Walker & Ryan fought hard for 4th, 5th & 6th.

In what is the most bizarre final I have ever seen, we saw the final race leader Liam Moyse go off due to a bumper coming loose, only to see second place driver Jared Boys also suffer the same problem, then Alan Mayes gets a flat tyre, Joshua Thompson pulled off the track thinking he was meatballed and Brianna McKenzie was stranded after spinning!!

Outstanding, simply outstanding these guys. Farkas was the eventual weekend winner in his shinny new race suit, but just from Virgulti with Straughney coming home third. What a display of how close racing should be! Gary Payne held on to them for a little while but then had a few small dramas and just couldn’t hold the leaders pace. When Billy “jiffy” Miller wasn’t getting into Paul Willmott they were having a great battle with “bazaar” Mendelson and Murph, my favourite heel clicker, seemed to have the midpack all to him self.

Basilio “dima” Micale was on the pace and with the front guys all weekend long, eventually taking the round win! But it was the battle between the Tempur sponsored #98 of Jackson Cooper & the best name in Karting at present, #99 of Mika Lemasurier that got everyone’s attention in a high speed touching of karts through the one fix plumbing flip flop. Both drivers continued but it was LeMasurier that did enough to secure 2nd and Cooper came home third. They will continue their on track battle very soon and great to watch it is too. A big shout out must go to Cittolin, Santin & Sell who were all in with a shout and not forgetting little Oceane Colangelo who was the little girl amongst these boys and very close to their pace now coming home 8th.

I’m not kidding when I say just about the best racing I have seen in a long long time!!! Virgulti took the round win from Bermingham with Farkas coming home third, but Straughney was absolutely in the mix all weekend long. It almost every race that these 4 were swapping places lap after lap after lap! And as if that wasn’t enough, the “Japanese samurai” Jumpei Morita was having a ding dong battle with Jason Smith. Great stuff & don’t miss these videos!

We may have saved the best performance of the weekend until last and that honour goes to the Corsa apparel driver the #58 Annabelle Rolfo who took the round win ahead of the probable weekend favourite, Kurtis Tennant. We were denied one possible heat battle when Kurtis pulled off with a failed engine but the two were on the pace all weekend long and Kurtis brought it home in 2nd. Third place went to the improving fast and now force to be reckoned with, the alien tech driver Alex Hadden. Brother Ryan followed to a fourth overall finish. Not even the super quick Rinaldi & Blake “the rocket” Lockett had an answer. Dramas unfortunately spoiled Oscar Target’s chances, but wow, what a race weekend! And I must just congratulate Blake “the rocket” Lockett who is retiring from racing and moving on for a while – we wish him all the best in his next adventures! 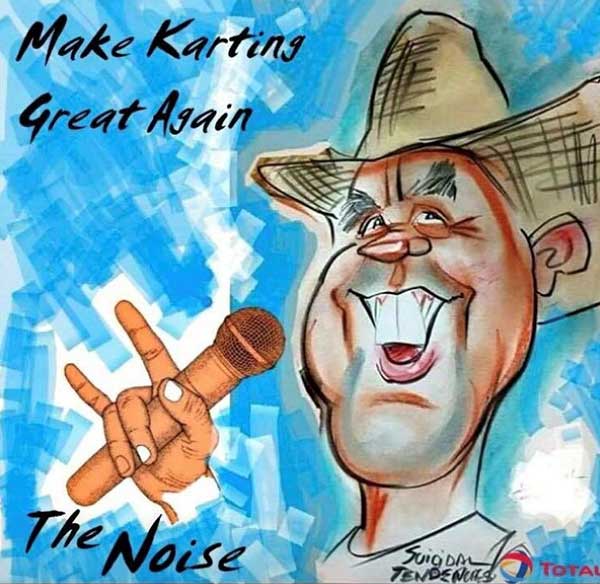