The club, which is an incorporated association, is affiliated with the Australian Kart Racers Alliance (AKRA), though it will handle its own licencing. President is David Harris.

The Barossa track is run by the Barossa Kart Club, which is affiliated with Karting Australia.

The Barossa club informed KartSportNews it is simply hiring the venue to Kartsport SA, much like it has done in the past with the Pocket Bike Association (which held an Australian Title meeting at the venue with competitors coming from all around Australia).

“Kartsport SA will be running the entire meeting” the club said. “They will be supplying all officials (and) lap scoring will be done manually.”

As the meeting will have no electronic timing, there is no need for competitors to own or run a transponder.

The first event is set to be very much a “run-what-you-brung” affair, the club inviting entries from those who have the older style Comer S80, Yamaha J and S engines etc. Plastic rear bumpers are not a requirement, out-of-spec is ok (eg, oversize bore) as “our plan is to bring back simpler and easier racing and classes.”

Initially, racing will be on any tyre, though the goal will be to move the 7 to 15 year olds to longer life Dunlop SL1As from the start of 2019. “Senior classes are still under discussion, we will involve all drivers in that discussion who come out to race in 2018” President Harris wrote on the club’s site. 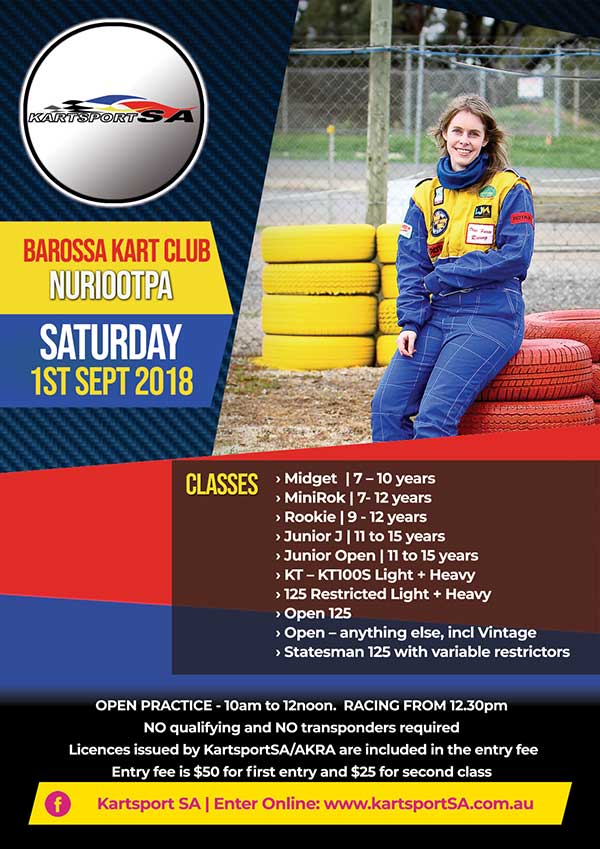