The last available ticket to the Rotax MAX Challenge Grand Finals will be awarded at the Race of Stars on the Gold Coast in October.

For the first time, a Rotax class will be offered at the event – DD2 at 177kg. International entries are expected as the winner will earn at ticket to the World Final in Brazil. Initial invitations are about to be extended to the top DD2 and DD2 Masters drivers in Australia, plus the best Rotax racers in New Zealand.

Read the full press release below. 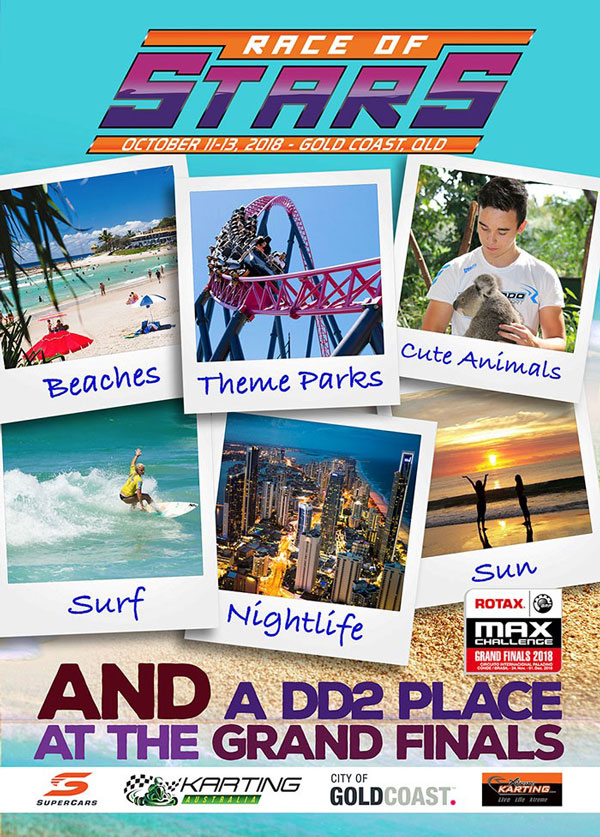 The Gold Coast Race of Stars karting extravaganza will be the focus for drivers from all across the globe this October.

Courtesy of BRP-Rotax and Australian Rotax importer International Karting Distributors (IKD), the winner of the DD2 Class at the Race of Stars will receive the final place on the grid at the 2018 Rotax MAX Challenge Grand Finals in Brazil.

2018 marks the first time that the Race of Stars has been a qualifying event for the Rotax MAX Challenge Grand Finals, much to the delight of IKD Managing Director Ian Black.

“The Race of Stars is undoubtedly Australia’s highest profile stand alone event. It’s great that we can add another international element with the Rotax DD2 class and link it to the Rotax MAX Challenge Grand Finals,” said Black.

“Normally, an opportunity like this is only available across the entire Series here in Australia and it will be the final qualifying ticket available in the World. I’m confident that the DD2 Class will produce some sensational racing.”

Event Manager Lee Hanatschek believes that the opportunity for a driver to win their way to the Grand Finals in Brazil adds another significant international element to the 2018 Race of Stars.

“Over the past five years, the international element of the Race of Stars has been significant, this new prize further compliments the event,” said Hanatschek.

“Places on the grid at the Rotax MAX Challenge Grand Finals are extremely limited and can’t be brought (sic), they have to be earned. To have such a prestigious prize for the winner of the DD2 class is fantastic for the event and we look forward to welcoming drivers from wide and far to battle for it.”

The DD2 Class at the Race of Stars will compete at the minimum weight of 177kg (driver and kart combined) to attract a mix of regular DD2 and DD2 Masters Classes.

The full list of classes that will be competing at the 2018 Race of Stars will be announced in the coming days. Following which, invitations for qualified drivers from the respective Australian and State Championships and Series’ will be distributed.

It is expected that more than 250 drivers will be in action at the event to be contested at the Xtreme Karting Complex on October 11-13.

The Race of Stars will launch the Gold Coast into a ten-day celebration of motorsports with the Vodafone Gold Coast 600 Supercars event being contested on the Surfers Paradise Street Circuit the following weekend.