The IAME Euro series completed its third round at the wonderful track of Wackersdorf in Bavaria, where thriller races took place in all four categories! It is becoming a pattern this year, as once again the rain made its appearance on Friday morning and laid the ground for mixed results in qualifying, but gave its place to a beautiful sunshine for the rest of the weekend.

Track action was nail-biting, with the previous points-leaders in three of the four categories failing to finish anywhere on the podium. Mark Kimber took the win in X30 Senior, Lewis Gilbert in X30 Junior, Thierry Delré in X30 Shifter and Miguel Peiró Luzárraga in X30 mini. These results reopened all title fights as Clayton Ravenscroft’s lead in X30 Senior, Lewis Gilbert’s in X30 Junior and Alejandro Melendez Pardi’s in X30 Mini are now down to just a few points. Meanwhile, Delré’s win in X30 Shifter meant that Sten Dorian Piirimagi who was about to seal the title with one race to go has now fallen behind in second and the title chase is wide open again for the last race in Castelletto. 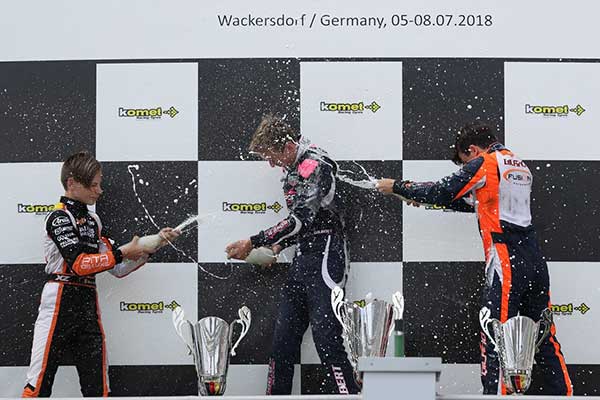 As always, there was excellent video stream coverage throughout the entire duration of the weekend with additional behind the scenes video footage. The RGMMC video team hasn’t been idle however and once again turned it up a notch by testing 60 frames per second video, which gave the viewers a super-smooth motion broadcast from the track!

Once again, Kimmy Abraham showed his incredible speed on Friday setting the fastest lap on a wet track. He would fall back to 5thhowever on Saturday’s heats handing Sunday’s pole position to Peiró. Ruben Volt was third at the end of Saturday and points leader Melendez third.

The prefinal was won by Melendez who looked like he was on track to extend his points lead ahead of Nathan Ottink and Peiró in third. However, in the final race Peiró showed his teeth, quickly took the lead and won ahead of Ottink. Melendez finished third on track but following a penalty for the front bumper Volt inherited third position on the podium.

Heading into the race, such was the points difference that the biggest question was if Piirimagi would be able to secure the title with one race to go or if we’d have to wait until Castelletto to see him getting crowned with this year’s X30 Shifter title. In an unfortunate turn of events however, leaving the weekend it is Delré who’s leading in the points!

The weekend started with a very close battle between Piirimagi and Kevin Lüdi, with the latter being the fastest at the end of qualifying. Piirimagi was a close second and Kaspar Korjus third.

Piirimagi easily won all of Saturday’s heats ending the day on top, but it was Delré who came back from a very bad qualifying to finish the day in second. Nicolas Rohrbasser was third.

The turnaround for the title started on the prefinal where Delré took the win, but Piirimagi failed to finish! Kaspar and Carlos Leon were second and third respectively behind him.

The final saw good battles between several of the drivers, but Delré took the final win, ahead of Korjus and Rohrbasser. Piirimagi half-way through the race started losing speed and barely finishing the race in a damage limitation mode.

The junior race started on a quickly-drying but still wet track for the Qualifying Practice, that found all points leaders outside the top-3. Zach Ripley took advantage of the conditions and set the fastest lap by more than two seconds ahead of Alex Lloyd and Liam McNeilly! Gilbert only managed a 15thposition, Sam Balota 7thand Van T’Hoff being the closest to the top-3 in 4thposition.

On Saturday’s Qualifying heats it was Lloyd who scored the best, ahead of Van T’Hoff and Ripley. Balota and Gilbert made up crucial ground from their bad Qualifying positions, coming back to 4thand 6threspectively.

In the prefinal Lloyd dropped back to 5th, with Balota taking first place. Van T’Hoff maintained second while Gilbert in third positioned himself well for the final.

After a great 15 lap battle, the final Junior winner was Gilbert, making a great recovery over the weekend to maintain his points lead, with Balota right behind him, and Van T’Hoff in third place completing the podium.

Following the previously wet track from the morning rain but with a nice sunshine in the horizon, X30 seniors found themselves in a difficult situation, as the category with the most entries would have to be split in two groups, with the first group to go on track at a disadvantage.

The difference between the groups was so big that Joey Van Splunteren, Niels Koolen and Valentino Fritsch who were the fastest in the first group only found themselves 5th, 15thand 17threspectively. Mark Kimber, Sean Butcher and Joe Turney would be the eventual top-3 of the Qualifying Practice.

The X30 seniors had the most total Qualifying Heats on Saturday, giving a thrilling show to the spectators, with Turney getting the best results, Butcher second and Kimber third.

Turney was once more the first to cross the line in the prefinal making himself a favorite for the race win, with Kimber second and Morgan Porter third. Butcher fell back to 7th.
The final race started with drama for poleman Turney, who retired during the formation lap, and Butcher dropping down to 15th. After a great performance the win went to Kimber, with Van Splunteren and Porter completing the podium, with Ravenscroft in 4thbarely salvaging some points to maintain his lead on Jordan Brown-Nutle in the points.

With one race to go and a surprising turn of events, title challenges are open in all categories with Ravenscroft, Gilbert, and Melendez still leading X30 Senior, Junior and Mini points but only by a small margin, while Piirimagi dropping behind Delré in the X30 Super Shifters.

It all promises for a great season finale next race in Castelletto, Italy, on August 9-12.