SUBSCRIBER STICKERS – Ben (NSW), David (Vic), Richard (NZ), Beckie (SA) and Bradley (QLD) thanks for subscribing to KartSportNews! We’ve sent you all emails so you can let us know where to post your free stickers.

For everyone else, if you’re reading this and haven’t already signed up, do so now! It’s free, you can unsubscribe at any time and you’ll get news emailed direct to your inbox – plus other exclusive content and offers. Navigate to the signup form in the Sidebar and fill it out today. 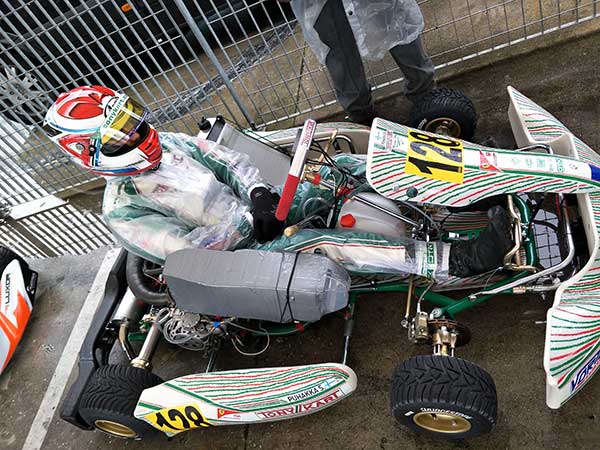 KARTSHOP SERVICES – Is this the most diverse range of services offered by a kart shop in this country – or the world? Check out Woodgate Racing’s business card! (website is woodgateracing.com): 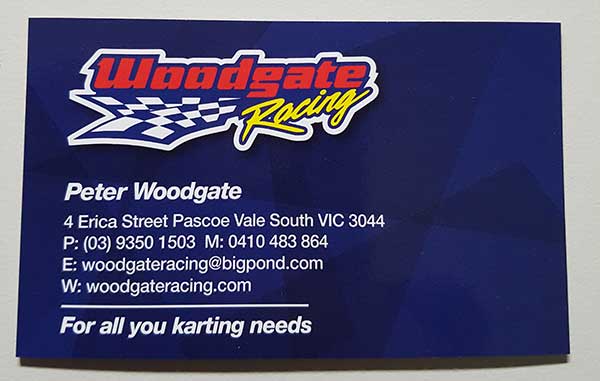 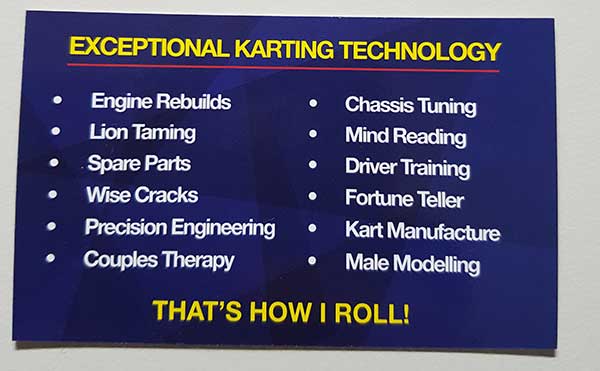 OCEANIA RETURNS – The Oceania Championships are back at Eastern Creek! Well, not quite the CIK ones from the 90s, but the second round of the Retro Karting Australia series. RKA’s ‘Oceania Titles’ will be held at the venue in May. Drawcard race classes are F100 Light & Heavy, plus vintage demonstrations. The RKA F100 Championship Series has grown to four rounds and kicks off in Victoria later this month. It concludes with two rounds in Queensland in August and November. 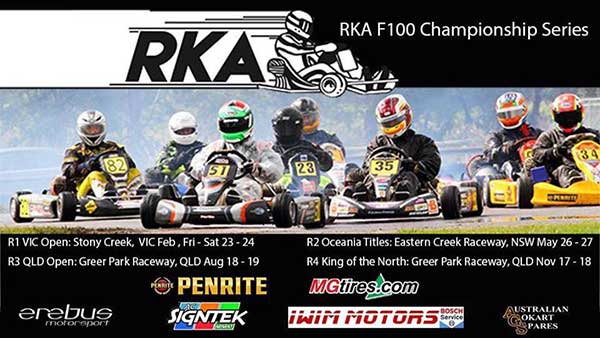 EVENT – Third & final round of the Tri-Track Series is at Maryborough Speedway on Feb 24. Series presentations will follow the race meeting along with a BBQ and jumping castle for the kids. 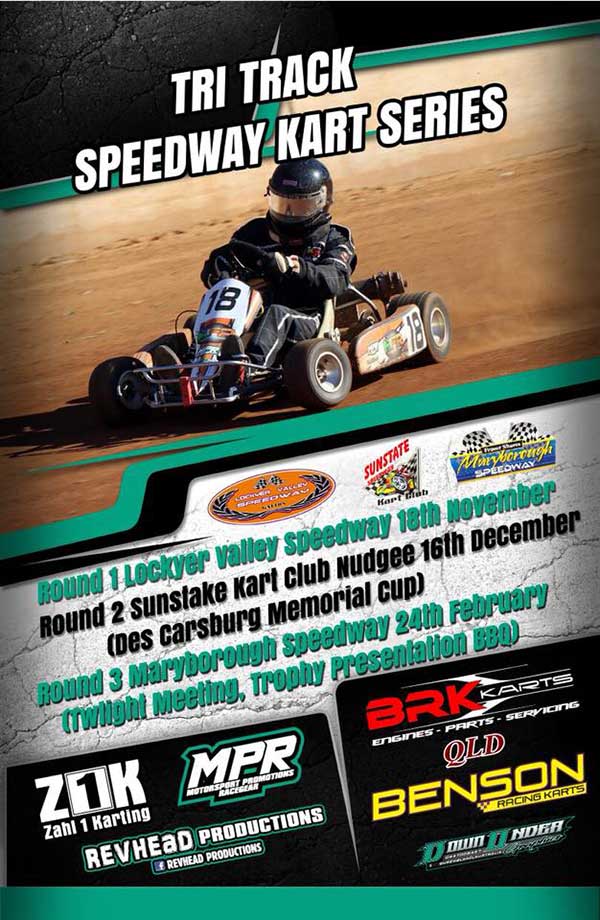 TEAM NEWS – The Paul Feeney Group Race Team has confirmed a six-driver line up for 2018. The team will contest all 5 rounds of the Australian Kart Championship. 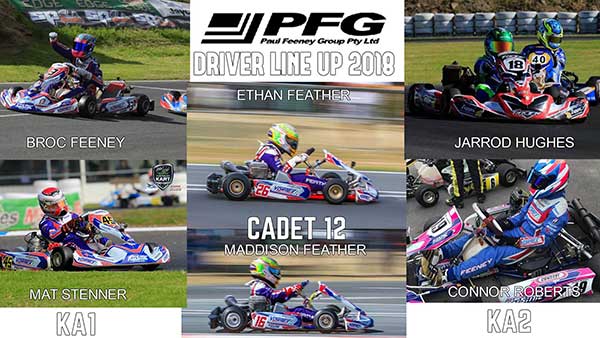 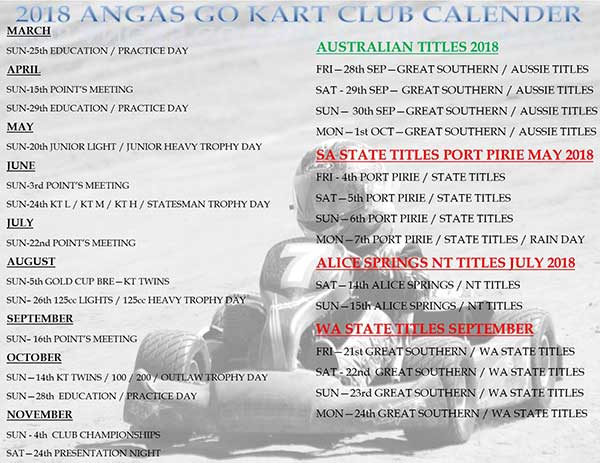 QUALIFIED JUNIOR – Liam Hydes will become the first junior driver from Australia to take part in a Sodi World Series final. Having qualified via the Slideways karting centre in Queensland, 14-year old Liam will be heading to Venice (Italy) in June. Liam first drove a kart a little over 12 months ago and now holds the lap record at Slideways. He is the 2017 Junior Sprint Series champion (18 podiums from 18 races, including 12 wins), is ranked #1 Junior in Australia for the Sodi World Series and ranked 27th (from 1206 drivers) in the international Junior SWS ranking. Drivers have to make their own way to the Sodi World Final, so Liam and his family are on the lookout for sponsors to help with the trip – see their GoFundMe page HERE.

STATE RULES – Victorian karters should familiarise themselves with the state-based regulations that Karting Victoria has just released. To be read in conjunction with the Karting Australia manual, the Vic Regs cover rules for the 2018 Country Series and Golden Power Series, plus the Vic State Cup, ‘open’ meeting rules and regulations for club race days. Download the 15-page PDF from the KV site by clicking HERE. 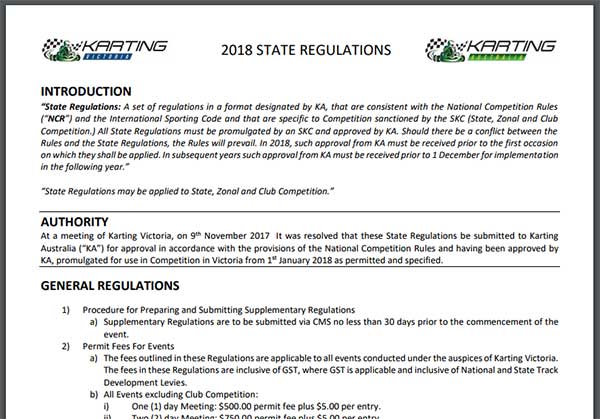 CHEATS BANNED – We reported a while back that Benik Kart in the USA had cut all ties with High-Rev Engineering and banned their team drivers from using HRE engines after several were disqualified from the SuperNationals. Well, now SKUSA has given the engine building company an indefinite ban for building cheater motors. While not detailing what the illegal modifications were, SKUSA stated they “were blatantly outside the rules” and that “the amount of resources devoted to hiding these modifications were even more troubling”. Read SKUSA’s statement HERE.

GRID GIRLS – When Liberty Media announced there will be no grid girls in Formula One this year, it reminded me of a reader poll we conducted in 2015 – “Are grid girls appropriate for karting?” This was the result:

TEAM NEWS – Harrington Doyle Racing has revealed a new livery and new sponsor for the 2018 season. VP Racing Fuels have forged a commercial and technical partnership for the upcoming Australian Kart Championship. “Through working with the Team at VP Racing Fuels and our partners at Link International (Motul Oils), we found that we were able to tune more consistent power and have better reliability with our DVS Vortex race engines” Team Manager Craig Doyle said. 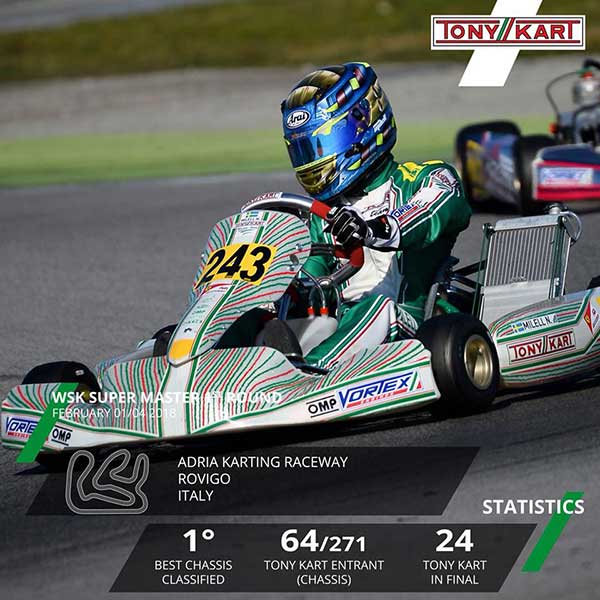 Due to the support of these organisations, the series will have giveaway prizes such as: thousands of dollars worth of prizes to the top 5 in each class for the season, a complete Energy Corse Kart, Kerbrider of the day prizes, Siclids custom helmets, 2 Arrow X5 50% discounts, Dunlop, MG & Bridgestone tyres at each round, IAME vouchers and custom sticker kit. (www.victoriancountryseries.com)

AIM @ AKC – AiM SportSystems will be attending Round 1 of Australian Karting Championship at Monarto SA from Friday 23rd Feb to Sunday 25th Feb to assist AiM dealers and customers. If you are after product support or technical assistance, just look out for Ron Burns around the pit area, or give him a call on 0418 424 560.

CONTROL OIL – The Rotax Pro Tour is moving to a controlled oil. As from round 2 at Dubbo next month, competitors must use Rotax’s XPS Full Synthetic Oil (Z297461). Each entrant will receive a bottle of XPS at tyre scanning. 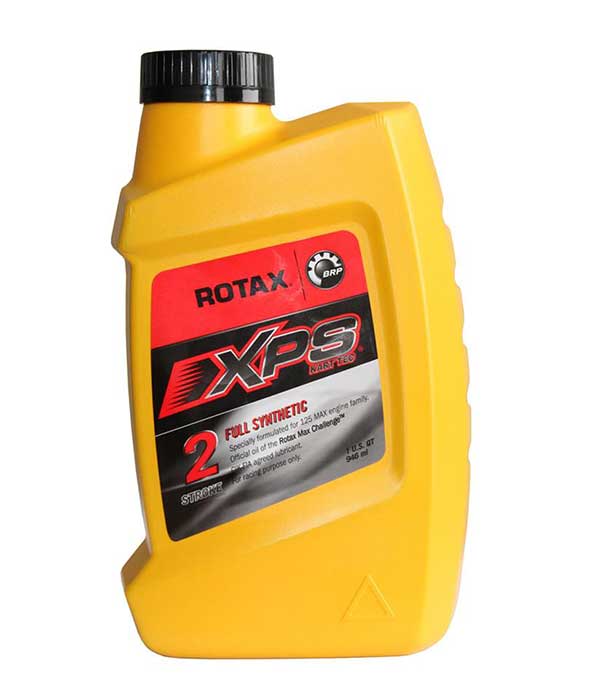 STICK IT WHERE? Where do you put your KartSportNews stickers? Back of the helmet for James Ordish. 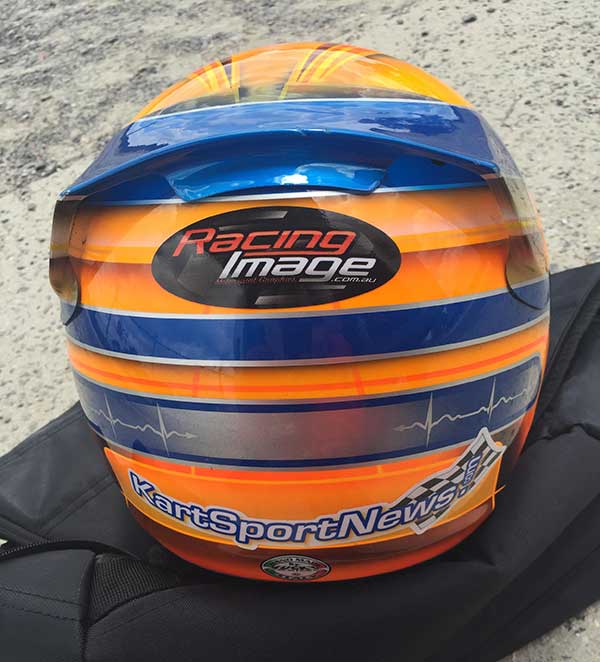 ELECTRIC EXPO – The Todd Rd kart track will (quietly buzz?) to the sounds of quite different vehicles on Sunday, Feb 18. Melbourne’s Electric Vehicle Expo will take place at the venue, allowing people to “touch, feel and drive a range of electric vehicles”. Described as the largest and most diverse collection of electric vehicles and related technology in Australia, RACV’s Royal Auto magazine says there will be live demonstrations, test drives and rides on a range of EVs. Entry is free and it runs from 9am to 4:30pm.

24-HOUR FILLING – CRG report that 20 of the available 36 spots in their 24 Hours of Italy race have now been filled. Entries have been received from Russia, Germany, France, Czech Republic, Spain, South America and, of course, Italy. The event will run at Adria International using tightly controlled ‘spec’ CRG/Hondas on March 24-25. 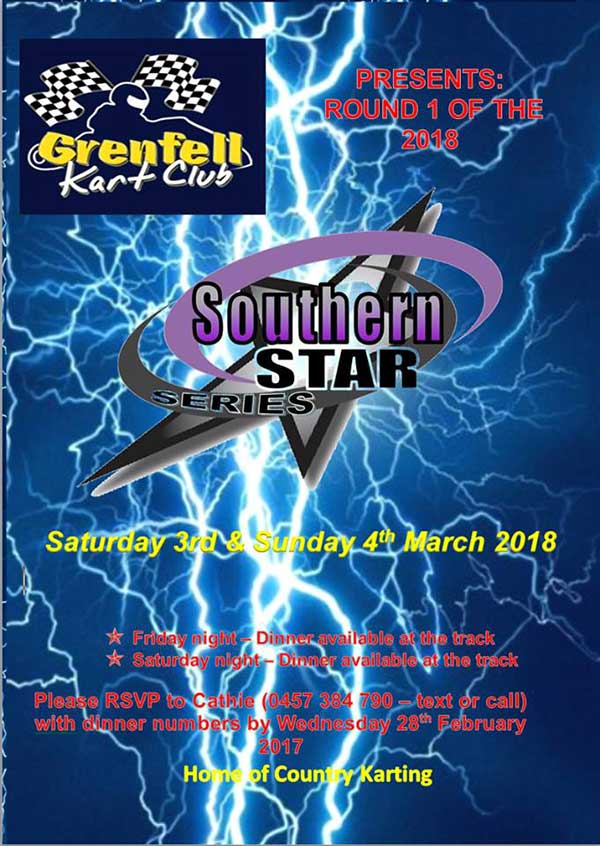 LUCKY LIDS – IKD has the latest arrivals of freshly painted helmets from the famous Italian company Lucky Design. Each helmet is a custom paint job, but it’s a “one-off” design, not a mass produced item. Check them out online or in store now! 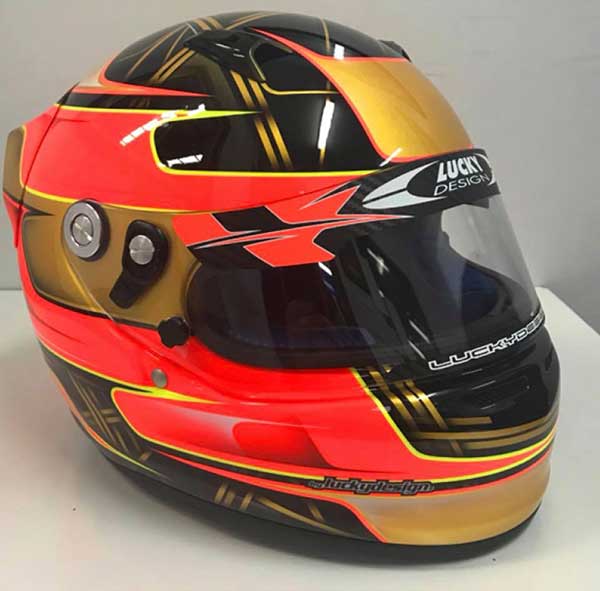 Too Good! (as posted by North Shore Kart Club) 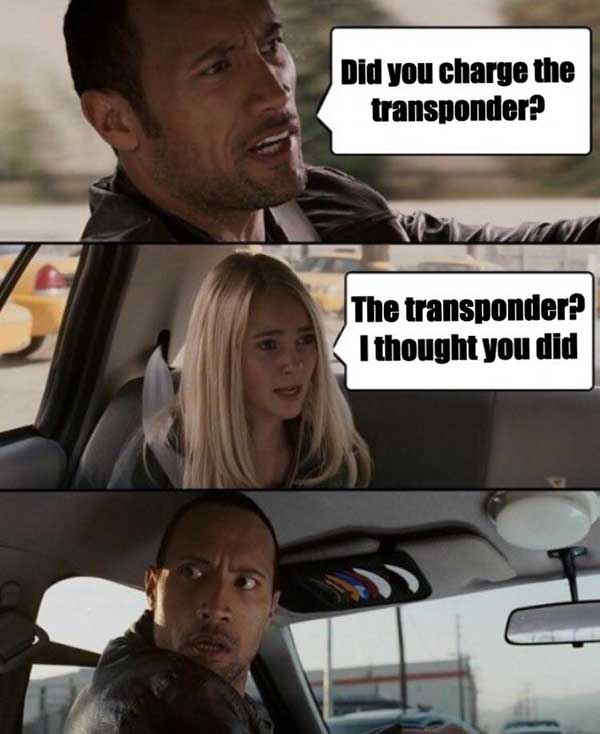