Karting Australia has revealed more detail about the 2018 Club Driver Rankings, which will be sponsored by SP Tools. Over $50,000 worth of prizes will be up for grabs.

One would expect the progressive rankings will be made public during the year, however it’s unlikely anyone will be able to calculate their own points.

Karting Australia has commissioned the development of an algorithm that will calculate scores taking into account such factors as race meeting size and the numbers in a class. But at this stage, there’s no mention of what the algorithm/weighting actually is…

SP Tools continues to expand its support of Australia karting by becoming the title sponsor of the inaugural Club Driver Rankings program.

To be known as the SP Tools Club Driver Rankings, more than $50,000 worth of prizes are on offer throughout 2018.

The SP Tools Club Driver Rankings is a national point score system designed to provide the Club-level racer with extra incentives to compete at their local venues more often. Drivers will race locally, but be ranked nationally, while vying for significant prizes in both their Group and specific Class. 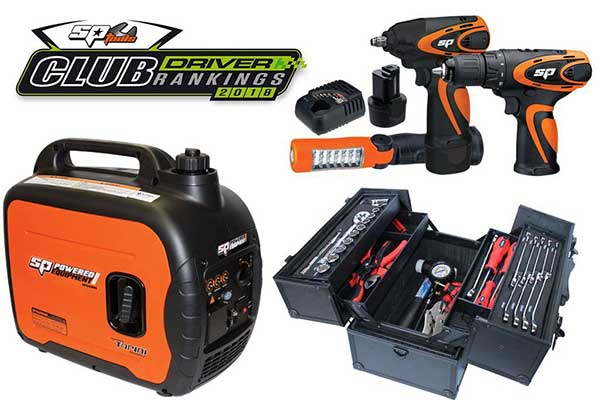 “Not only are we there encouraging the young kids to try karting through Junior Sprockets, but we are supporting the grassroots and the top level competition as well.”

“The SP Tools Club Driver Rankings program is tremendously exciting as it allows us to support all of the karting Clubs across the country.

“I’m really looking forward to finding the ultimate Club racers at the end of October.”

There are four main Competition Groups in the Rankings – Cadet, Junior, Senior and 4SS – along with specific Class Rankings for 12 Nationally recognised Classes.

Up to eight Club events from each affiliated Club will be automatically entered into the rankings program.

A maximum of a Driver’s six best Club Driver Rankings Race Meeting results in a single Class/Competition Group at each Club during between March 1 and October 31 will be tallied up to create their final Ranking in that Class and Competition Group.

Importantly, there’s no entry fee for Competitors (aside from the regular nomination for a Race Meeting) to be eligible, and there’s also no cost for Clubs to register as a part of the SP Tools Club Driver Rankings.


Winning is a bonus, but the Club Driver Rankings it’s also about participation with the point score equalised across small, medium and large sized Clubs.

The top 15 ranked drivers in each Group will all receive prizes while the top three in each of the 12 Classes will also share in the prize pool.

“The Club Driver Rankings is very exciting for the Club Level racer. It rewards them for simply competing at their local Club,” said Karting Australia Chief Executive Officer Kelvin O’Reilly.

“To be able to offer such a huge prize pool for our Members at a Club level from our partner SP Tools and Karting Australia’s four tyre suppliers is something that has never been seen before in the sport of Karting. It’s arguably the largest ever prize pool assembled for Club-level motorsport in this Country.”

It’s not just the drivers that win either. Each Karting Australia Club that is registered as a part of the Club Driver Rankings has the opportunity to purchase a range of SP Tools products at a significantly discounted price for either fundraising, event prizes or use at their venue.

To read more about the specific rules and regulations please click here.

Registration forms for Clubs will be distributed to Club Secretaries in the coming days.