I wide range of ‘alternative’ components were approved a couple of weeks ago for the 125cc IAME X30 engine – see the official announcement and technical bulletins HERE.

Australian IAME distributor Remo Racing has produced a FAQ sheet giving answers to some of the common questions being asked.

Q. When will the new components be available for purchase?
A. As the new components have now been approved by Karting Australia for use, we have put in our order with IAME who have promptly prepared it for shipment. The shipment will be forwarded onto the shipping company before Christmas and sent via sea freight. The transit time is approximately one month so we expect it to arrive early February. This includes complete engines and the new components as a spare part.

Q. Why do we need new components, what’s wrong with the old parts?
A. The X30 was originally released more than ten years ago, in that time IAME have developed many different model engines refining and improving components along the way. These new components are a result of this development and have been introduced to improve the overall package and increase ease of use for the end user. There is nothing wrong with the early components, much like a manufacturer releasing a new model car, the new parts are just an evolution of the previous version.

Q. Do I have to upgrade? Can I just upgrade a single component?
A. All of the new components are optional and not compulsory; there is no requirement to change anything from what you currently have. If you would like to purchase the new components you can upgrade as much or as little as you wish; for instance just upgrade the carby or just the exhaust system or both, it’s up to you. The introductory price for the carby is valid for one carby per engine number which must be supplied when ordering; there is no need to return your existing carby to receive this discounted price.

Q. Will the new components be faster than the old parts?
A. Many people tend to associate the word “upgrade” with a power increase, for these components that was never the goal. These parts are being introduced with the purpose of reducing maintenance and increasing simplicity, thus making it easier for the end user to extract the maximum performance from the engine with minimal tuning.

Q. Will there be a weight increase for classes using the X30 engine?
A. As has been said previously these components are an update in user friendliness, not performance so there is no need to alter the weights. The new components combined (including the extra water the radiator holds) add approximately 1kg to the engine package.

Q. I was told the electrics were not changing, why are they in the homologation?
A. Customers who contacted us prior to the release of the homologation were told the electrical system will not be changing for 2018, this is still correct. The new electrics are currently being developed and are undergoing evaluation and testing all over the world with IAME importers, we have no intention of releasing them until they are fully proven.

Q. What will these new components cost, will the price of an X30 engine increase?
A. We have been working with IAME to get the best price possible for these new components and we are pleased to pass these savings onto the customer. Below is a table
outlining the prices of the major components supplied as a kit for convenience; these kit prices will be valid until May 31st 2018. Unfortunately the price of an X30 engine package will rise in 2018; this is the first price increase since the X30 was introduced in 2009. 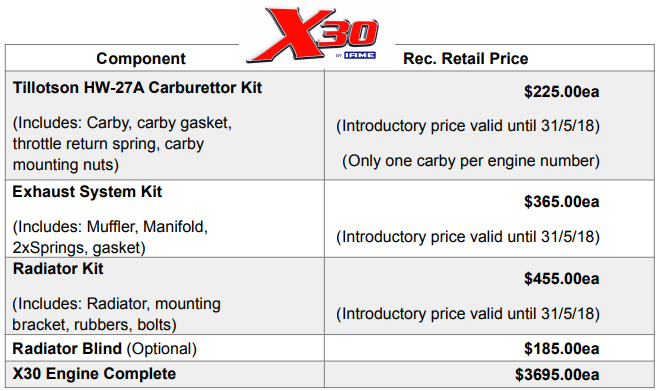