A bunch of star karters is set to line up and contest the 2018 Rotax Pro Tour.

IKD has published that several drivers have committed to next year’s series, including Australia’s two World Final winners, Troy Woolston and Cody Gillis.

While several thought he might retire from the sport after becoming the DD2 Masters World Champion, Woolston will be back to defend his crown in a category that will this year include Jason Pringle.

Meanwhile, Cody Gillis will have factory Praga driver Jorge Pescador to contend with, the Spaniard a confirmed DD2 entrant for Round 1 under the G-Force Karting banner.

GILLIS V PESCADOR
Be at Round 1 of the 2018 Rotax Pro Tour to watch our current DD2 World Champion Cody Gillis take on International driver, Jorge Pescador at Todd Road on January 26 – 28. 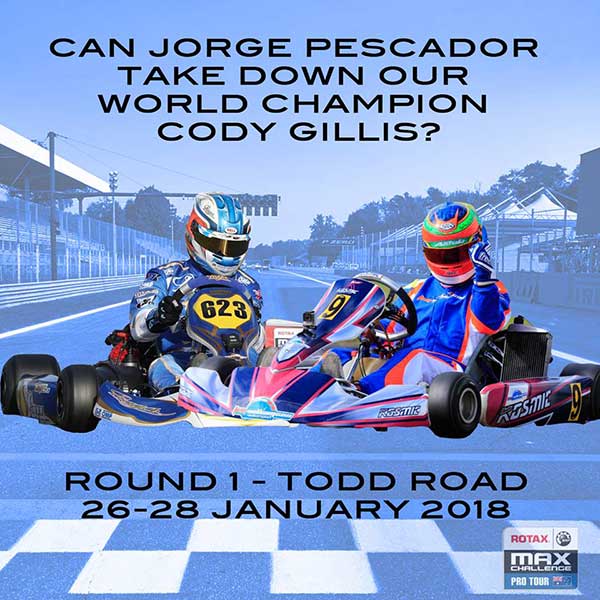 KIWI STAR TO RUN 2018 PRO TOUR!
Josh Hart, has confirmed he will be competing in Rotax Light at the 2018 Rotax Pro Tour. Josh has stood on the steps of the RMCGF podium and will be looking to make it to the top step this year.

HE’S BACK!
Jason Pringle is set to make a return to the Rotax Pro Tour in 2018 in DD2 Masters where he will fight it out to make his 8th World Finals appearance. Will he make it three world champions in a row for Australia in the over 32 category?

ROTAX HEAVY!
Rotax Pro Tour is the ONLY National Series to recognise and award a Champion in the heavy category! Offering competitive racing & of course 4 State Titles up for grabs! Remember to register for Rotax Heavy in 2018.

WARD BACK
Former DD2 front runner Damian Ward is coming back in 2018. He is a confirmed starter of the 2018 Rotax Pro Tour and will definitely be in contention for a World Final seat. Welcome back Damo!!!!

DD2 MASTERS!
Kris Walton has confirmed that he will be lining up yet again in the DD2 Masters field in 2018, vying for another all important World Finals Ticket!

HANGING UP THE GLOVES? FAR FROM IT.
Troy Woolston has confirmed since his return from becoming the DD2 Masters World Champion that he will most certainly be continuing his racing career at the Rotax Pro Tour and says that with Pringle, Howard, Bretherton & Walton just to name a few “Masters should be a bloody good class next year”.

MORRISSEY TO TACKLE ROTAX LIGHT.
2018 Will see Troy Morrissey back in the Rotax Light field where he will fight it out for many podium finishes and battle for the all important Rotax Max Challenge Grand Final Ticket.

DD2 MASTERS
Veteran of the sport Troy Bretherton has confirmed he will be competing in DD2 Masters for the 2018 Season. Will this be the season that takes Troy to the Worlds again?

JUNIOR MAX ADDITION!
James Wharton is confirmed to run in Junior Max in 2018. After finishing 3rd in Mini Max at the World Finals James will certainly be one to watch next year.

CAPTAIN KANGAROO!
Forming up in DD2 Masters yet again in 2018 in the Pacific Kartsport Team will be our 2017 Captain Kangaroo, Scott Howard.

LIAM FORDS BACK FOR MORE
Liam has confirmed he will be back in Rotax Light for the 2018 season. He will fight it out in what will be a strong field for a chance to qualify for the Grand Finals!

Above: 2017 Team Australia Caption Scott Howard “It’s going to be a massive year with lots of new and exciting things that Blackie’s got planned”