The match between Germany’s Peter Elkmann (Anderson / VM) and the Czech Adam Kout (MS Kart / DEA) took place as expected during the second round of the CIK-FIA Superkart European Championship In Assen (NLD) from 4th to 6th August, 2017. On the other hand, while Yannick De Brabander (MS Kart / VM) presented himself as an arbiter of this battle of the chiefs, recurring mechanical problems and two retirements kept him away from the fight. Andreas Jost (Anderson / VM) played the role of the third man by performing well, his excellent lap times having nothing to envy those of Elkmann.

The Qualifying Practice did not however predict such a strong confrontation in the Races. The serene Elkmann immediately seized pole position, and then watched the competition. The two Britons Liam Morley (Anderson / DEA) and Daniel Clark (Anderson / VM) followed by more than two seconds, a chasm! Elkmann emerged to beat the lap record with 1’34”526, a gain of half a second from pole in 2016. In the second session, Kout, who had solved his brake problems, joined his opponent on the front row, but the gap had never been so significant between them. De Brabander was already overwhelmed but nevertheless managed to settle on the third row in the company of Jost, behind the British duo.

In Race 1, De Brabander did not finish the first lap, and Kout took the lead quickly. On his own land, Marcel Maasmann (Anderson / VM) was in a good position, but Daniel Clark started even better and surprised Elkmann to take 2nd place for a short period. Everything changed and the positions were emerging at the end of the first lap with Kout the leader ahead of Elkmann. Jost was in contact with Clark, then came Maasmann, Jason Dredge (Anderson / PVP) and Morley.

The Race was going to be lively, exciting, and very spirited. Elkmann looked for the opening on Kout without succeeding. At the halfway point, Jost was setting the fastest laps and came back gradually to the two leaders, still fighting. Farther away Morley moved closer to Clark while Maasmann slipped a bit. Three laps from the finish, Elkmann surprised Kout who was forced to fall back, with two wheels off the track. In the following lap, after several passes, Jost overtook Kout, forming a German double behind Elkmann. Morley surpassed Clark for 4th position, Maasmann was in trouble and preserving his 6th place ahead of Dredge.

The lessons of Race 1 suggested that Kout had the means to win this season at last, but this was not the case during Race 2, the course of which was clearer at the front and hard fought behind the favourites. Elkmann took the lead at the start and Kout took on the role of the challenger, without being able to follow the pace set by the leader. Jost, again very fast, came to attack Kout as soon as he overtook Maasmann, Clark having retired after the start. Going well, Morley was working to make up for his deficit after a mistake.

Peter Elkmann (76 pts) took a big advantage with three victories, Liam Morley (57 pts) took 2nd place ahead of Adam Kout (52 pts), who will have to achieve a miracle to keep his crown at the final Competition to be held at Le Mans on 28th and 29th October.

In the CIK-FIA Mono Cylinder Cup, Australian Jordan Ford (Anderson / DEA) was also a double winner with faster times than some Division 1 drivers which allowed him to enter the main classification. He leads the provisional ranking with 84 points, followed by Gavin Bennett (Anderson / DEA), 73 pts, and Paul Platt (PVP / Gas Gas), 70 points. 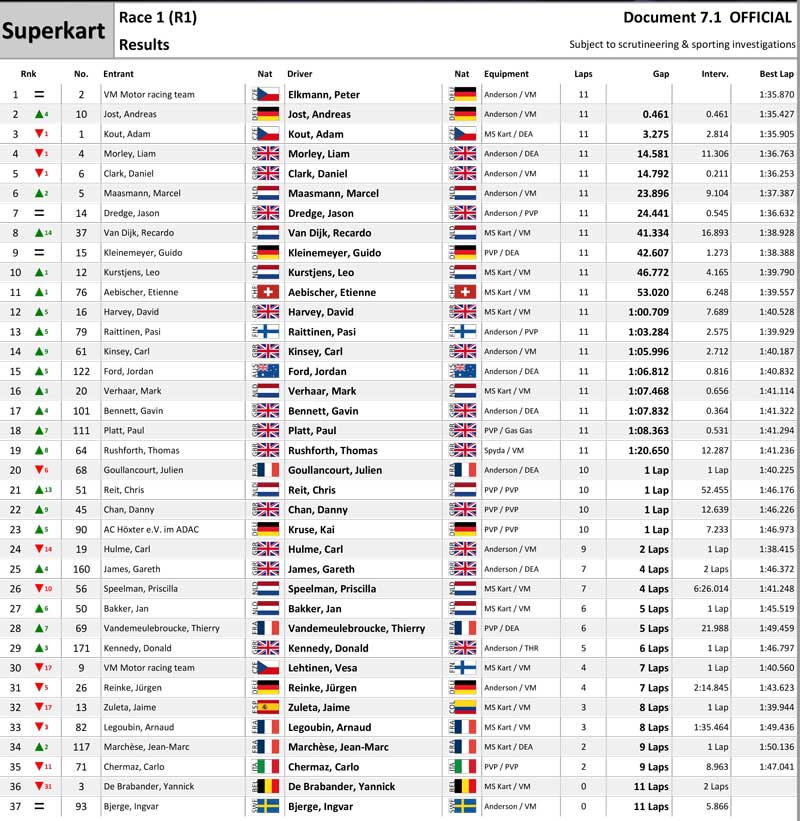 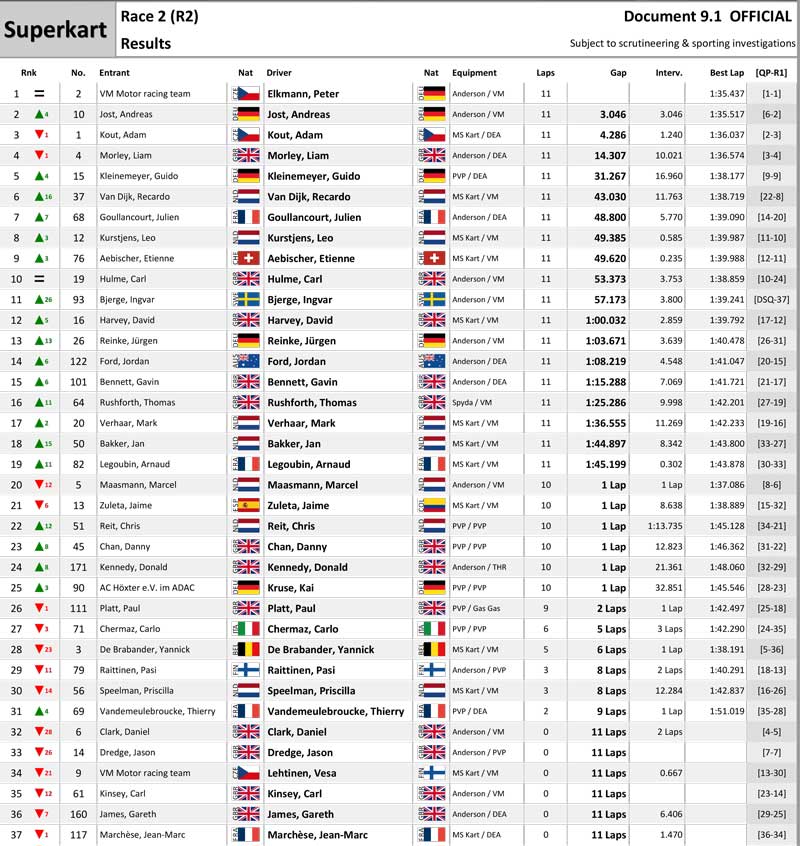