Adelaide-based karting champion Jimmy Piszcyk starting racing Go Karts when he was 7 years old, and like any kid of that age he had a dream of being a champion in his chosen sport.

Having now turning 12, Jimmy has had a year that has brought that dream closer to reality. But it could have been a very different story. 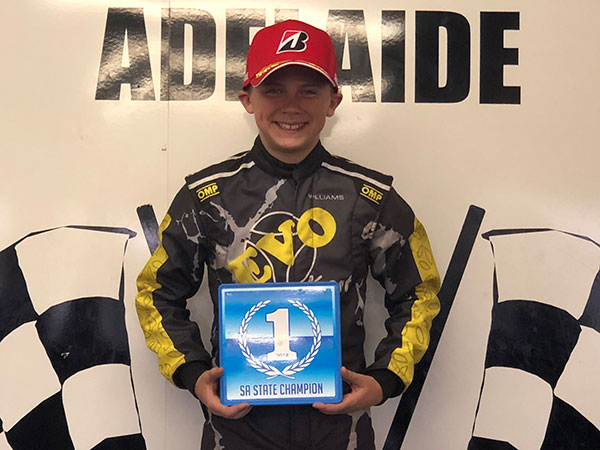 In the sport of Sprint Kart racing, the Cadet 12 class is comprised of kids under 13 years of age who race petrol powered racing karts on sealed surface tracks at speeds reaching 100kph.

There are differing levels of competition:

The SA State Championship in 2018 was decided over 2 race meetings, Whyalla in mid-July then Bolivar in Adelaide at the end of September.

Jimmy put in a dominant performance winning all heats and finals at both events as he became the 2018 SA State Champion in the tough and exciting Cadet 12 class.

Jimmy also competed in the Australian Kart Championship, a National Series with races held at:

Unfortunately the year started badly for Jimmy as he broke his ankle riding his non-power scooter.

Prevented him from practicing, he arrived at Round 1 of the National Championships at Monarto having spent very little time in the kart.

He managed to overcome this and push through, winning 3 of the heats and finishing 4th in the final out of 56 Karts, an absolutely awesome effort.

Disaster struck again when Jimmy broke his collarbone, five weeks before travelling to Round 3 at Newcastle.

Jimmy was adamant he was going to race, regardless of the pain and extent of the injury.

Thankfully the medical advice suggested he would be OK, but he would have to grit his teeth and Jimmy would do what he does best – race hard or go home. Going home was not an option for Jimmy!

Having made it to Newcastle, Jimmy encountered mechanical problems as his engine failed to start for qualifying, a situation that would start him from the back in the heat races.

Luck and determination shone on Jimmy. His chief mechanic Jason (Jimmy’s Dad) managed to get the kart sorted and Jimmy worked his way forward throughout the heat races and towards the pointy end of the 45 kart field.

This proved to be Jimmy’s weekend as he took out the round win and the #1 step on the podium and collected a large number of points which ensured he was in contention of the all-out National Champion number one position with 2 rounds to go.

He achieved amazing results throughout the series, finishing 3rd overall in the championship and winning a number of heat races throughout the year, and of course taking the top step of the podium in Newcastle.

Jimmy missed out on the National #1 spot by only 10 points. Although he didn’t finish number one, he did South Australia, Karting SA and his family extremely proud.

Based on his performance in the National Series, Jimmy was given the opportunity to travel overseas to Italy and race in the prestigious Rok Cup, the de-facto World Championships for the Cadet 12 class. While results didn’t go his way, he impressed enough to be invited back to race in other European events in 2019.

Jimmy, with his Dad Jason by his side, will be a young driver to watch for many years to come. They both have the drive, guts and determination to continue pushing for excellence and no doubt will rack up great results in 2019 and beyond.

Jimmy would like to thank the following and could not do it without them: