Responsible for the factory and the Energy Corse racing team, Mick Panigada is a master in training young Drivers. Since its creation, his team has forged an enviable track record from Junior to KZ, in the major CIK-FIA Championships. The European KZ1 Championship won by Paolo De Conto remains one of their main achievements, but Energy Corse has also contributed to the emergence of great hopefuls like Dorian Boccolacci. 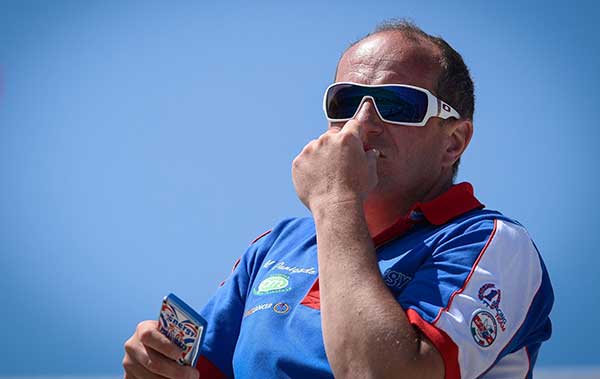 CAN YOU REMIND US OF YOUR JOURNEY AS A DRIVER, BEFORE GOING TO THE OTHER SIDE OF THE FENCE?

Originally, my family did not want me to go karting. But one day, I had the opportunity to try one through a friend of my father. He had a minikart and said to me one day laughing: “I signed you up for a race. If you win, you can keep the Kart! And I won. I was eight years old! That’s how we started. I started with regional and national races, before starting off in international Competitions in Junior, Intercontinental A, Formula A and even Formula Super A. I had the opportunity to race for Tony Kart, before joining the Top Kart team. I have a lot of great memories, like the European ICA Vice Championship in Sweden in 1994. I thought I could win, but I lost some pressure in a tyre at the end of the Final and I wasn’t able to attack the leader.

HOW WERE THE ENERGY CORSE BRAND AND TEAM BORN?

The project started in 1997 with two people I met while driving for Top Kart: Jon Bussell and Jon Targett. We quickly developed a network around the world and won races. A few years later, we had a difficult time. But in Karting, you always have to fight, manage the adrenaline of competition in a positive way and never give up. I decided to reorganise the company and Energy Corse went back in the right direction. At the beginning of the 2000s, we enjoyed a strong reputation thanks to our success in Intercontinental C. We lost the European Championship by a small margin in 2003 with Massimiliano Colombo, but we won next year with Ricardo Van der Ende, before winning it several times thereafter. From then on, Energy Corse was very much on track and we have won many Competitions to date.

HOW DOES ONE GO FROM BEING AN INTERNATIONAL KARTING DRIVER TO BEING RESPONSIBLE FOR ONE OF THE MOST RESPECTED TEAMS IN THE PADDOCK?

Above all, you need a good dose of passion. After that, everything was done little by little, in stages, with successes, as well as disillusionment. I never said to myself: “Well, tomorrow, you will start a team that will become World Champion.” First of all I tried to do things in a serious and professional way, while constantly seeking the highest possible level of performance, with the best engine manufacturers. Everything was put in place as needed. Victories and titles came successively. Energy Corse has won many European Championships in ICC, KZ2, KZ1, KF and Junior, the KZ2 International Super Cup, and repeated titles in National Championships, Brand Challenges and International Series. Only the World Championship has eluded us!

Yes, this is the source of our greatest pride! Seeing our former Drivers progress at the highest level of motorsport, or become an factory Driver in other teams is also what we are looking for. This success can be explained for several reasons. In addition to the special atmosphere in our awning, we have put in place a rigorous team on the technical level, very competitive equipment, while paying a lot of attention to Driver coaching. You have to know that a youngster coming from his national championship and wishing to participate in international Competitions has a lot to learn. You have to be behind him to guide him and teach him everything a champion has to master to get on the podium. For me, getting an excellent result with an inexperienced Driver is as rewarding as winning with a safe bet. In the end, the best reward is when a Driver comes to say “thank you”, while racing in F2, LMP2 or GT, as happened to me recently.

WHAT ABOUT THE PARTNERSHIPS THAT HAVE BEEN SET UP BETWEEN ENERGY CORSE AND CAR RACING?

The international Karting world and cars have become very professional and it is important to create bridges between these two disciplines. One of our roles is to find the best Drivers and put them in touch with influential people. For example, Dorian Boccolacci wore the Lotus colours at Energy following contact with Gwenaël Lagrue. This season, Andrea Kimi Antonelli, who drives for our team in Mini, has been spotted by Mercedes as part of its programme for young Drivers. Today, the next generation arrives, with Alex Powell, who is advised by Mike Wilson, six-time World Karting Champion, and Simone Sorio, who has assisted many talented Drivers. At this level, our team manager Luigina Guerrini also performs a valuable job in coaching these Drivers.

IS NOT IT FRUSTRATING TO SEE DRIVERS CHANGE TEAMS JUST WHEN THEY ARE READY TO FIGHT AT THE FRONT?

Yes, of course! In the past, it was common to keep Drivers in your team for many years and reap the rewards of your efforts. This was the case with Dennis Olsen, Joel Johansson, Nicolaj Moller-Madsen, Simas Juodvirsis, Sami Luka, Paolo De Conto and Dorian Boccolacci, who trusted us for several years. With Paolo for example, we built something incredible, which led us to the European KZ1 Championship in front of all major teams: Tony Kart, CRG, Sodi and Birel ART! Today, everything must happen quickly, the Drivers and their supporters are impatient. But you cannot become a champion in a month. Seeing the Drivers leave early for single-seaters complicates the situation. Currently, Energy Corse needs to invest in the long term, being very present in the categories for young people, from Mini onwards. I hope that this policy will be fruitful in the coming years…