Australia has announced its team of drivers set to take on the World at the Rotax Max Grand Final Challenge in Brazil at the end of November in a gala presentation at the world’s newest motorsport complex, The Bend Motorsport Park in South Australia.

In all, 12 Australians will jet off to Brazil to defend the Nations Cup at the Grand Final Challenge with 11 being announced last night and the final Rotax DD2 ticket to be awarded at the annual Gold Coast 600 Race of Stars in the middle of October.

The Boarding Passes that were awarded after Australia’s qualification events – the Rotax Pro Tour – are as follows:

It was also announced that Ryan Kennedy – who is heading to his fourth Rotax Max Grand Final Challenge – will be the Team Captain.

The evening also doubled as the presentation of the annual Jason Richards Memorial which is given to a driver in the Rotax Pro Tour that embodies the spirit of the late Supercars star, who was a good friend and sponsored driver of Australian Rotax importer, IKD.

The driver announced as the Jason Richards Memorial Award winner for this year was 16-year-old Rotax Light driver, Reece Cohen. 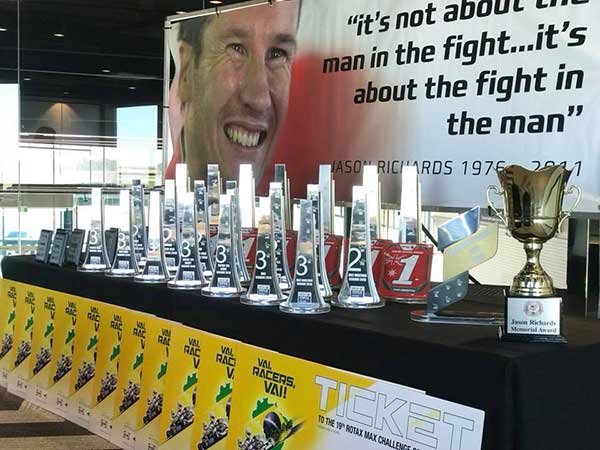 The evening, attended by 150 people, including The Bend Motorsport Park Managing Director and founder, Doctor Sam Shahin, brought to a close what had been a thrilling way to open The Bend’s Kart Stadium – the only Australian karting complex rated by the governing body CIK-FIA as being suitable internationally rated events.

Michael McCullouch became a first time victor in Rotax Light. The Kiwi put together the perfect weekend setting the pole position time and winning each race, including an emotion charged final when he passed fellow Kiwi, Joshua Hart on the last corner of the last lap around the outside.

Jaiden Pope confirmed the Series win in Junior Max with a competition crushing performance. The Tom Williamson Motorsport driver put in arguably the drive of his young career to take the win by 4.7 seconds.

Jackson Rooney broke through for a hard fought second placing, while William Seal came from deep in the pack to complete a TWM trifecta and also scoring enough points to get himself into the Australian team.

Cody Brewczynski had a successful entry into the Rotax DD2 ranks, taking a solid win and the Jason Richards Cup. He beat home Exprit driver, Josh Behune and Ryan Kennedy who was charging hard in the back end of the race.

Kris Walton took the win in a tense DD2 Masters Final over Scott Howard and Jason Pringle. The win cemented second in the Series for Walton behind outgoing World Champion, Troy Woolston with Howard being awarded third in the Series overall.

Sebastian Manson took his first Rotax Pro Tour victory in Mini Max. The Kiwi was pushed all the way by a hard charging Series Champion, Costa Toparis. Toparis had been shuffled back in the order and pushed hard to get himself into second, however Manson had enough of a margin that he took the win comfortably.

Aiva Anagnostiadis had a breakthrough first podium in third position for B&A Karting.

Jaxson Burns had the honour of being the first trophy winner on The Bend Karting Stadium when he took victory in Micro Max. Peter Bouzinelos crossed the line in first position, however was later disqualified for a bodywork infringement.

Finishing second was Max Walton completing a ZedCorse quinella with Jake Rutkowski securing his trip to Brazil with third placing.

In Rotax Heavy, Paul Rodgers took a solid win in his FA Kart. He was pushed all the way by Series champion, Lane Moore. Moore, who didn’t have a handle on Saturday’s conditions started from the rear of the grid and charged his way forward. Soon in second, he started closing down on Rodgers’ lead but laps ran out in the end. Mitchell Branson took a hard fought third placing.

Thus brings to a close to the 2018 season of Rotax Pro Tour competition, with just the Race of Stars remaining to finalise the Australian team for the Brazilian event in November.

The Bend Motorsport Park’s multi-purpose karting precinct had its first test today with the Rotax Pro Tour getting underway in changeable weather conditions.

The competitors, that have traveled from around Australia and New Zealand for the event have put on a terrific display of motor racing despite the fact they faced everything from perfect, dry weather running to blinding rain and blustery wind throughout the course of the day.

In a breakthrough performance in Rotax Light, Pacific Kartsport’s Michael McCullogh managed the clean sweep of the day, taking the pole position and all three heat races.

Kiwi Praga Karts star Josh Hart, who has won two rounds and was in with a mathematical chance of making ‘Team Australia’ for the Rotax Max Grand Final Challenge in Brazil in November ended the day with two seconds and a fifth – enough for him to gain points on the man he’s chasing – JC Kart’s Reece Cohen while Series leader, Ben Jurczak extended his Series lead with a trio of strong performances.

Marcello Surace had one of his best performances in the Rotax Pro Tour including his first ever third place – his highest ever Pro Tour finish.

In the premier Junior category – Junior Max – Bailey Sweeney got through for his maiden win, taking two heat races along with Series leader, TWM’s Jaiden Pope.

Kiwi Tom Williamson Motorsport pilot, Jackson Rooney set the tone for his day with a pole position and was rarely outside the top three, others to impress included Top Gun Racing’s Taylor Hazard and Luke Pink.

In DD2, Cody Brewczynski took two wins in his Velocity Kart Shop CompKart in his first attempt in the category, whilst youngster Jac Preston got through for a heat win in incredibly wet conditions.

Damian Ward, who was at the point of the Race to the Worlds coming into the weekend, is well and truly in the hunt as well.

In DD2 Masters, Scott Howard ended with two race wins and a non-finish after a solid day at the office on the world’s newest karting circuit. The Queenslander relished the opportunity to take on the challenging 1117 metre layout.

Victorian, Ashley Seaward crossed the line first in the third heat but later received a bodywork penalty dropping him to third.

Kris Walton in the ZedCorse CompKart won the second heat, while World Champion Troy Woolston has been largely outside the top three, Trevor Whitby and Terry Hanly have been among the front runners on occasion in a wide open category where just about everyone has struck trouble at some point during the day.

Runaway Series leader, Costa Toparis is well in control of Mini Max. Making the shift to BirelART ahead of this weekend has seen Toparis possibly look even stronger – taking three dominant wins throughout the course of the day.

B&A Karting’s Aiva Anagnostiadis is looking to score her first Rotax Pro Tour podium this weekend and is showing determination to achieve that goal with a trio of front-running finishes. Also up the front is Sebastian Ruiz and Kiwi Sebastian Manson – who has made the most of a poor qualifying performance.

FA Kart driver Paul Rodgers has made the most of the conditions – which for the most part were terrible – for each Rotax Heavy race, taking three heat wins. He had a spirited fight with South Australian Andrew Cash in the third heat, while aside from that Rodgers – who successfully made the move to Heavy at the last round – was largely untouched throughout the day.

Pro Karting’s Lukas Janev has shown some strong pace throughout the course of the day as has Ben McMellan and the returning AWC Motorsport Academy driver, Tasmanian Ben Walter.

In Micro Max, the youngsters have been typically entertaining. Jaxson Burns had the honour of being the first ever race winner on The Bend’s karting circuit, taking victory in the last corner from Max Walton.

Other wins were taken by Peter Bouzinelos – who won a rain-soaked race on slick tyres aboard his Sera Driver Development kart – and James Anagnostiadis who won his first ever Pro Tour heat race.

Series contender Jake Rutkowski has had an up and down day, allowing Bouzinelos to eke out more of a lead heading to the Finals tomorrow – which will prove crucial for who will represent Australia at the World Finals in Brazil.

Australia’s top kart racers have declared The Bend karting circuit as world-class, with the venue already in preliminary discussions with organisers about the prospect of an international event down-under.

Teams from all over Australia and New Zealand have arrived in Tailem Bend to compete in the last round of the Rotax Pro Tour. The event is also the final opportunity for drivers in each category to qualify to represent Team Australia in the world finals in Brazil at the end of November.

AustralianWorld Champion Troy Woolston summed up the circuit in one word. “Awesome.”

“I came here with a big smile on my face. It’s really unique. I think it’s the combination of mid speed, flowing corners, and fast entry, it’s hard to pick a breaking marker so it feels complex. There’s not a go kart track like this in the country. Everyone’s pretty excited about it. It’s around the size of the big European tracks that we race at when we go to World Championships. I could see worlds here, it would be pretty awesome to see everyone come down under.”

2017 Team Australia Captain, Scott Howard has raced in Portugal, Italy and the US and is hopeful of the prospect that Australia can now host a world final. “It’s awesome. When you get here you feel like you’re in Europe. There’s nothing in Australia that compares to this circuit. We talk about going to the world finals, and until now Australia could never have hosted that event, but we could 100% hold it here at The Bend.”

Howard also highlighted the impact a circuit like The Bend could have on young karters coming into the sport.

“Karting in South Australia should build from this. I’ve travelled all over the world to go to tracks like this. As a young SA kid having this track in your backyard to come and practice on is sensational.”

The Bend’s karting circuit is the only one in Australia built to CIK-FIA specifications rated by the international governing body.

Ian Black, Managing Director of IKD, tournament organisers of the Rotax Pro Tour said, “it’s hard to believe we’ve finally got a world class facility in this country. From the minute you drive in, you realise you’re somewhere special.”

Black believes it is a realistic objective to host an international karting event at The Bend, which would be an Australian first. “When we travel to Europe everyone wants to come to Australia, if we can hold the Rotax World Championship here it would be fantastic.”

Track action continues tomorrow with qualifying and heat races with Pre-Finals and Finals on Sunday. Spectator tickets are available at the gate for $15 single day, and $25 for both days. Kids 12 years and under are free.