Fed up with poor driver behaviour, SKUSA will mandate pushback bumpers from the next round of its USA Pro Tour series.

(KartSportNews conducted a survey at the end of 2016 when the bumpers were not in use in this country – read that old post HERE).

The Superkarts! USA Pro Tour put its first race in the books during the first week of March in New Orleans, and while the race was deemed a success on many levels, continued rough driving and poor racecraft was again a topic of discussion.

With the unfortunate trend continuing, SKUSA organized a meeting with a small group of key industry members that quickly grew into an unofficial team owner meeting, and from that gathering came a consensus to implement the pushback bumpers system for the five IAME categories, beginning at the second event on the schedule – the SpringNationals in Phoenix on May 4-6. 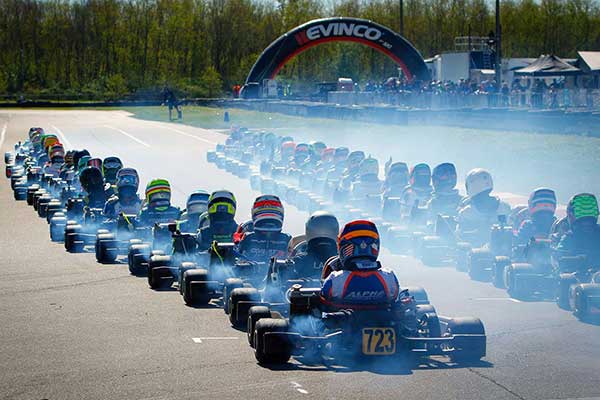 Internal discussions have been ongoing since the end of the Winter Series and this meeting with SKUSA’s teams was the tipping point. SKUSA places safety as their ultimate priority and after continued rough driving in NOLA, they have elected to follow the requests of much of their customer base to make this move. All IAME racers in the Micro Swift, Mini Swift, X30 Junior, Senior and Master classes will be required to run the pushback bumper in Phoenix and beyond.

“We’ve had significant discussion regarding the quality of the racecraft and the increasing level of contact in our IAME classes, and while I had hoped that investing in manpower and the video marshalling system would be sufficient to alter approach of our drivers, it simply has not been enough,” admitted Tom Kutscher, Superkarts! USA owner.

“I was hesitant to employ the pushback bumper system because I wanted to put the racing into the hands of our drivers, but the action at our Winter Series and the WinterNationals has shown us that this will simply not work. I’m happy that we were able to meet with our team owners to gather their input and we put it to a vote. Our customers voted to bring the system into the Pro Tour, so that’s what we’re going to go. This will obviously be a work-in-progress to determine the penalty structure for the system, and we’ll release this information once the decision has been made.”

Over the last two years, SKUSA has invested time and over $70,000 into staffing and video marshalling equipment to better officiate their events, although even with a steady stream of penalties being handed out through the Winter Series and the weekend’s events in New Orleans, the rough, disrespectful driving has persisted. Starts have been a particular issue, and SKUSA is looking to evolve their starting procedures to lessen turn one contact, which will also be addressed by the pushback bumper system and its penalties.

The SKUSA officiating staff is currently in discussion in regards to how the penalty system will be presented, although early indication points to an aggressive, not eligible for protest time penalty to begin the approach.

The ninth annual SKUSA SpringNationals will begin with practice on Thursday, May 3 at the Phoenix Kart Racing Association in Glendale, AZ. The change of venue from Sonoma to Phoenix was announced during the SpringNationals and the final track configuration will be announced in late April.