Some more “Best Of 2017” articles by the CIK-FIA (originally published on the CIK-FIA website. Click HERE to visit the site and read some others):

The new Promoter of the CIK-FIA European and World Championships from 2018 to 2020 has not been slow to take up its role since the FIA’s decision was announced in late November. Time is indeed of the essence for RGMMC Group before the start of the season at Sarno (ITA) in April 2018. In frequent contact with the CIK-FIA, James Geidel, President of RGMMC Group, took advantage of one of his many visits to the FIA in Geneva to discuss the main lines of future action.

MR GEIDEL, FIRST OF ALL, HOW DID YOU CONVINCE THE FIA TO CHOOSE THE RGMMC GROUP?
It has given us great satisfaction to have convinced the FIA of the validity of our proposals. This is a significant challenge that we will have to take up. As Jean Todt, the President of the FIA, told us in a recent interview, we need to succeed. We are aware that the task will not be easy, but we have strong cards to play. RGMMC Group has always wanted to reach the highest level of Karting with the CIK-FIA Championships. We will count on the vast experience of our whole team in the organisation and promotion of Competitions. RGMMC Group has been involved in this activity for 15 years, mainly in international Karting series.

WHAT ARE YOUR PRIORITY OBJECTIVES?
High level karting has followed the evolution of the modern world in many ways. Although its interest, both technical and sporting, has never faltered, its success with the public and sponsors is no longer up to the challenge. This is an exciting but expensive sport that deserves a better audience. We will focus part of our effort on communication by using the interactivity of social networks, getting the public back on the tracks, putting contacts with the national and local press back into the spotlight, and especially by ensuring a broad and real TV audience for this spectacular sport. This extensive media coverage is the key element in attracting new partners to the CIK-FIA Competitions. Karting needs new resources, both for its organisation and for the professionals and Drivers who are the main players.

HOW ARE YOU GOING TO ACHIEVE YOUR GOALS?
It is too early to announce our entire strategy, because we are in the process of preparation. The time limit is very short and we are focusing for the moment on the crucial points. Our collaboration with the services of the CIK-FIA is already very productive and everyone is working hard for the season to start under the best auspices. The organisation of the Competitions is a subject that we control. We have plenty of ideas for developing Karting. The knowledge of my father, Roland Geidel, the founder of RGMMC Group, regarding the sponsorship will be very useful, while I am well placed from the top of my 31 years to breathe the dynamism and sense of innovation necessary for the development of the discipline.

We are very committed to a constant dialogue between the various parties involved. The CIK-FIA, the national federations, the organisers, the Drivers, the professionals and the media are our main points of contact. We will not succeed without gathering all energy around the future of Karting. We will start by promoting a new, more convivial atmosphere in the paddock and provide ASNs as well as existing partners with a VIP reception structure to increase their participation in CIK-FIA events. The live-streaming will be more extensive, from Friday to Sunday, with many topics related to the Race, and we will simultaneously cover subjects in several languages ready to be broadcast on television. Of course, we are working in many other directions, but I cannot say more for the moment. We will know more by the first Competition at Sarno.

DO YOU HAVE OTHER LONGER-TERM PROJECTS?
We obviously have a longer-term vision for Karting Competition. We must first prove ourselves in the field before we can participate more actively in the evolution of this exciting sport. But it is certain that we intend to contribute to the future of Karting alongside the CIK-FIA, the ASNs and the industry. We are aiming for an increase in the number of participants and we have ideas for cost reduction. Our contract as a promoter runs for three years, so the countdown has already started to reach our ambitions.

Ronnie Quintarelli – Karting To cars (and back)

A 38-year-old Italian Driver, Ronnie Quintarelli became a professional in Japan thanks to the results he obtained at the highest level in karting at the turn of the millennium. Always passionate about the discipline that taught him everything he knows, he could not resist the proposal from Birel ART and TM Racing to participate in the CIK-FIA World KZ Championship in September 2017 at Wackersdorf. 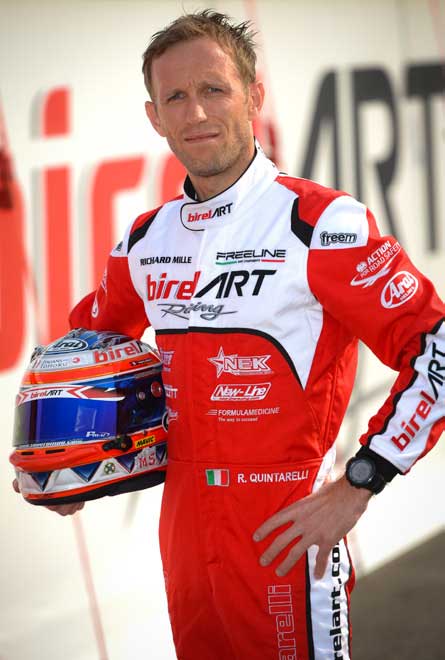 FIRST OF ALL, RONNIE, WHY DO WE HAVE THE PLEASURE OF SEEING YOU AT WACKERSDORF?
My passion for karting has always remained intact and I seized the opportunity to participate in the World Championship. At the beginning of the year, I had the opportunity to do a few laps on the new track at Lonato in a KZ2. I was enthusiastic, and with Franco Drudi of TM Racing and Ronni Sala of Birel ART I found two supporters to arrange my participation in the World Championship. This project gave me extra motivation throughout the season in Japan, because I always had this meeting in mind in September at Wackersdorf.

WHAT ASSESSMENT DO YOU MAKE OF THIS COMPETITION?
It was a very nice experience! The KZ are really fast, the chassis have evolved a lot in 15 years and the engine is much more usable than the Formula C of my time. The feeling of speed is an even greater sensation than at the wheel of my Nissan Super GT which develops 500 hp. Braking is even later than in cars. The current level of competition is extremely tight in KZ and it was difficult for me to play a leading role. I’m happy to have been able to gain eight places in the Final, but I still remained in the middle of the pack.

GOING BACK TO THE PAST, HOW DID YOU BECOME A PROFESSIONAL DRIVER IN JAPAN?
It was karting that opened the doors of a car career. After my very good performances in the 2002 World Championship, Pierre-Henri Raphanel invited me to come and try F3 in Japan at the end of the season and that’s how it all started. I had many successes in single-seaters and then in the Super GT Championship which I won four times for Nissan.

KARTING HAS REMAINED PRESENT IN YOUR CAREER. WHY IS THAT?
I have always been convinced that practicing this discipline would give me an advantage in car racing. I even trained with a group of about ten Super GT Drivers. We prepare together every Monday before a race. We have our own equipment equipped with KF4 engines. The Driver who won Super GT in 2013 thanked me for these karting practice sessions, recognising that it had helped him a lot.

In Japan, as elsewhere, young people are moving towards cars very early. I think that’s not a good thing. Motorsports teams and major manufacturers do not realise how much karting is essential for Driver training. I do everything I can to open their eyes to this discipline which they do not know enough about.

Danny Keirle – The Year of Consecration

A British Driver who races in the United Kingdom most of the time, Danny Keirle has always been among the fastest in the various categories he has raced in since his debut. The attentive observers had spotted this very promising talent who managed to break into the X30 Senior without significant financial resources. The year he was 20 years old, Danny literally burst through the screen by winning the CIK-FIA World Championship at PF International.

DANNY, YOUR WIN AT THE WORLD WAS A BIG SURPRISE. WHAT HAPPENED FOR YOU?
It was a surprise for me too. I did not know the OK category, I had never raced in a CIK-FIA event before and I did not know what to expect. I had the chance to join the Chiesa Corse team for the occasion, because I did not really have any other possibilities. We worked a lot together to develop the Zanardi chassis just before the race. I thank Dino Chiesa for giving me this fantastic opportunity. I don’t think I disappointed him!

HOW HAS YOUR CAREER IN KARTING GONE?
I started racing at the age of 10. My father was racing himself and I sort of took over. Over the last three years, I have won many X30 Senior titles like the Kartmasters Grand Prix, the British Championship and the European Open. Winning the title of CIK-FIA World Champion; I had not dreamed of it! I don’t yet know what I will do next season, but I would like to be able to race in more CIK-FIA Competitions.

HOW DID YOU BUILD YOUR WORLD VICTORY?
I know the PF International track very well, that’s why I started the World Championship adventure in the OK category. So I had the home advantage, which is not negligible at this track. It helped me stay clear of skirmishes and penalties. My kart was very effective and I didn’t encounter any technical problems.

To accompany the one-year lowering of the age of the OK category introduced in 2017, the CIK-FIA has decided to set up a specific classification for Drivers who have not yet reached the age of 16, participating in the CIK-FIA World Championship and the CIK-FIA European Championship. 51 Drivers met this criteria this season and it was the Moroccan Sami Taoufik who won the title of Rookie of the Year for 2017.

An internationally acclaimed category, OK is the benchmark for direct-drive karts. The most experienced Drivers, including a few professionals and several former World Champions or European Champions, compete throughout the season against young talents straight from the OK-Junior category.