Contested on the Bugatti circuit at Le Mans (FRA) on 28th and 29th October, 2017, the third and final Competition of the CIK-FIA European Superkart Championship was cut off from Race 2 without changing the outcome of the season.

Peter Elkmann had indeed secured his triumph by winning the first Race. After narrow failures in the past two years, Elkmann, arguably the fastest this season, took four wins out of five to claim the second title of his career.

The Czech Driver Adam Kout (MS Kart / DEA), double reigning champion, had meticulously prepared his equipment for Le Mans. He also had the fastest time in Qualifying Practice, but his rival Peter Elkmann (Anderson / VM) was only 66 thousandths of a second behind him. Next, Andreas Jost (Anderson / VM) followed with a similar gap to Liam Morley (Anderson / DEA). However, Jost’s disqualification at the end of the Assen Competition allowed Morley to believe in his podium chances in the Championship.

VICTORY AND TITLE FOR ELKMANN AFTER RACE 1

After a thunderous start from all the Drivers, the first lap had a large number of retirements without, however, the smallest crash.


Elkmann sustained his high pace and Kout was forced to let go of a few tenths, aware that his hopes of victory were disappearing. Similarly, Morley was out of reach of Jost for 3rd place. After starting cautiously, Alexandre Sebastia (Anderson / DEA) came back through the pack and distanced his opponents. Elkmann won an indisputable victory that assured him of being crowned European Champion. Kout took 2nd place ahead of Morley, while Jost and Sebastia completed the top five.

In single-cylinder, the race was clear for Jordan Ford (Anderson / DEA) who clearly outpaced all his opponents and even managed to take 12th place in the overall standings.

On Sunday morning, the weather was cloudy and sometimes wet. Delayed, the second Race was to take place on a drying track, while all of the participants had kept the slick tyres. An incident occurred during the first lap and the necessary intervention blocked the track. The red flag paused the race at first, before a definitive cancellation.

Elkmann was then confirmed as European Champion with four wins and 100 points, Kout followed him in 2nd place with 80 points, Morley (68 pts) took 3rd place ahead of Clark (51 pts) and De Brabander (41 pts).

The CIK-FIA Superkart Mono Cylinder Cup was won by Ford, also with four wins and 100 points against Bennett (80 pts) and Platt (70 pts). 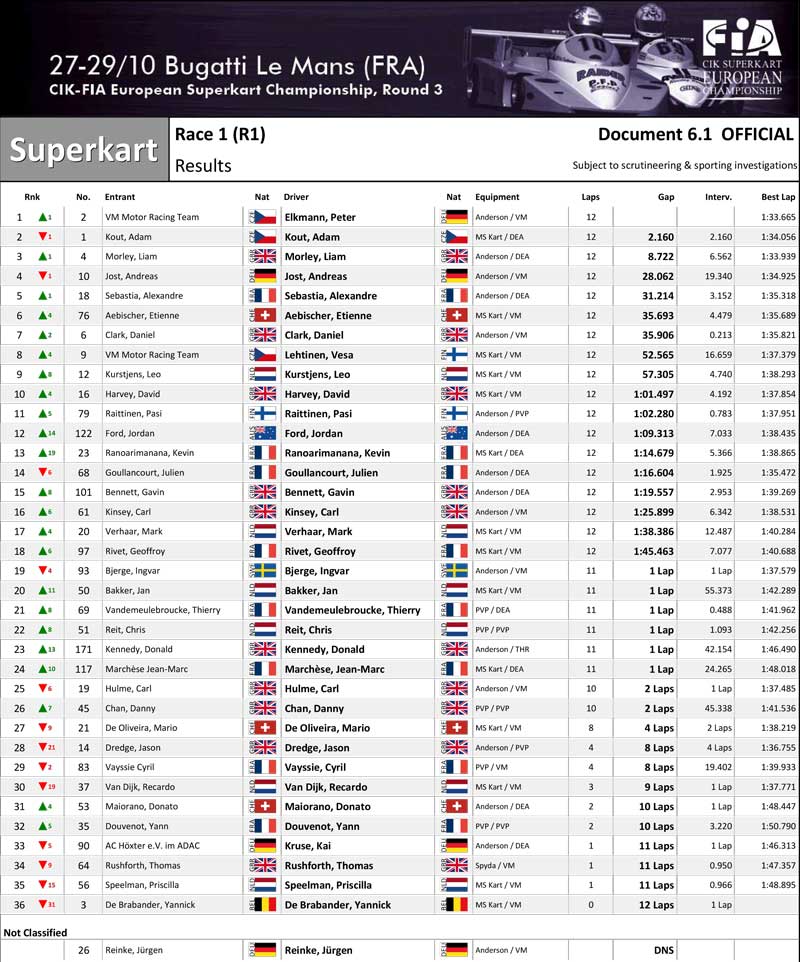