CRG and Sodi kart factory teams are set to go head-to-head in the LeMans 24-hour kart race at the end of the month.

The entry list (further down the page) suggests a rumoured Australian entry did not materialise.

While the Automobile Club de l’Ouest is finalising the details of the organisation of the 32nd edition of the 24 Hours Karting which will take place on September 30th and October 1st at Le Mans Karting International, prestigious names and teams are actively preparing. The challenge of the engine manufacturers is exciting, between the two major Italian manufacturers IAME and TM Racing.

The multiple stakes of the 2017 24 Hours Karting gradually increase the tension 15 days from the start of the mythical two times round the clock. Last year launched as the CIK-FIA Endurance Championship for the GP1 category, endurance karting’s benchmark event is also included in the classification of the FFSA French Endurance Cup for the GP2 category, where the greatest number of teams will compete. 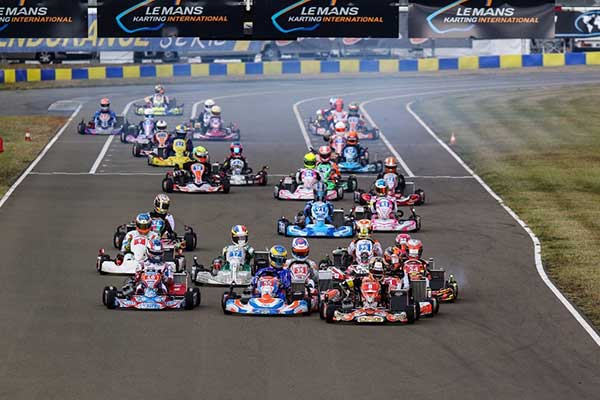 Other challenges will enliven the race, such as a 100% female team proving that the equality of opportunity is not an empty word in a sport open to everyone. It is also worth mentioning the incredible challenge experienced by the experienced Handikart drivers by taking part in this competition, along the lines of the achievement of Fred Sausset, a quadruple-amputee, who entered the 24 Hours of Le Mans in 2016.

Mechanically, the struggle for victory will be between the TM Racing factory and the IAME factory with its Parilla engines, used by top-level teams Sodi and CRG. The prestige of a success at Le Mans is well understood by these world-renowned Italian manufacturers, who are not taking involvement in the 24 Hours Karting lightly.

Kees Van De Grint, Vice-President of the CIK-FIA cannot hide his enthusiasm for this legendary event:”After the success of the 1st edition of the CIK-FIA Endurance Championship, I am both proud and eager to give the start of the 2017 24 Hours of Karting as the official starter on Saturday 30th September at 3 pm. I expect the race to be even more exciting this year. After the KZ, OK and OK-Junior World Championships, the CIK-FIA Endurance Championship, to be held at Le Mans under the auspices of the ACO, will be the third biggest event of the international season. On the other hand, weather permitting, I will be delighted to be able to drive my historic kart as part of the Kart Legend demonstrations!:

As the fateful date approaches, applications for membership are flying in to the ACO. We already know that more than 30 teams have confirmed their participation. The CIK-FIA Endurance Championship, raced on the powerful OK-powered karts of the GP1 category, will see the big names in international karting and the best French specialists of the discipline. Winning the World KZ Championship for the second time in a row in Germany last weekend, the Italian Paolo De Conto will start with the factory CRG team. At Sodi, we can count on the presence of Vice-World KZ Champion Anthony Abbasse who has just proven that he has recovered all his strength after his accident in June in Spain. He will be supported by the new winner of the KZ2 world competition, the CIK-FIA International Super Cup, the Italian prodigy Alex Irlando.


The CRG factory is preparing for its second participation with the utmost care, updated testing and ambitions revised upwards. Powered by the IAME factory, the Italian manufacturer, which appreciated the benefits of its participation in 2016, will not relax, even though their attitude remains full of modesty before the start. The top team will be driven by very fast racers. In addition to the star Paolo De Conto, double World Champion in KZ, the Italian team will include Flavio Camponeschi, the KF1 World Champion in 2012, and two promising young talents, the Norwegian Dennis Hauger and the Briton Callum Bradshaw.

The spotlight is also on the Sodikart factory team. The French manufacturer, although competing for the first time in its own name, benefits from the incredible experience of some of Sarthe RTKF’s staff, winners of the classic race eight consecutive times. Claude Jamin will be present alongside the Sodi Racing Team as a special advisor. The Sodi kart will be driven by an international team of four drivers. Five times a winner of the event, the Frenchman Anthony Abbasse for the occasion will work with the Dutchman Bas Lammers, the young Italian Alessandro Irlando and one of the top Americans, Jake French. Sodikart continues its fruitful collaboration with the engine manufacturer TM Racing, officially involved in the 24 Hours Karting alongside the French brand.

The top seeds of the GP1 category will be there to give the factory teams a hard time. For example, Rouen GSK 1 (Jean-Philippe Guignet, Maxime Bidard, Gautier Becq and William Godefroid, 3rd in 2016), or Wilfried Lecarpentier’s Center Wintec (Tony Kart / Vortex), with Victor Compère, Bastien Leguay and Ulysse De Pauw, are on the favourites list.

The entry will consist of a large number of GP2 karts with the Rotax Max engine, the equivalent of the LMP2 category in cars. It is not impossible that the best specialists can dream of a podium in the overall standings, as was the case this year at the 24 Hours of Le Mans. 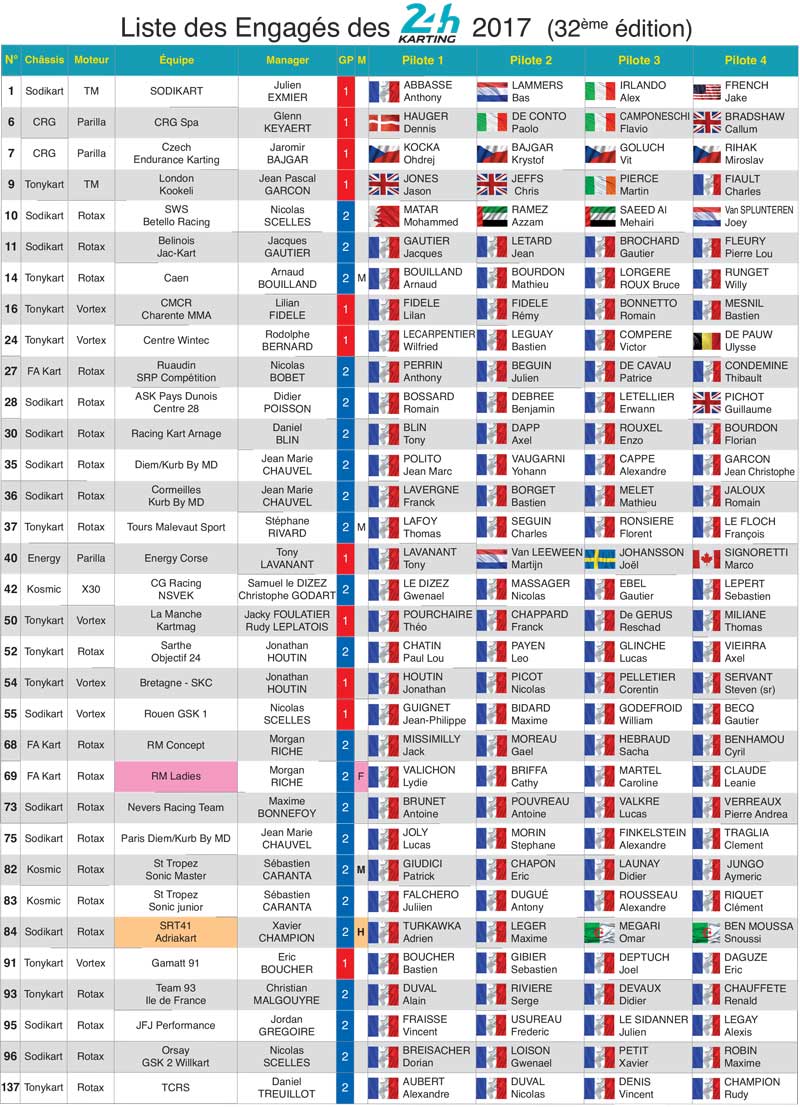 However, the challenge will be more difficult this year due to the removal of the front brakes, while the minimum weight remains higher than that of GP1. The experience gained by the best GP2 teams, combined with easier maintenance of the equipment is an advantage not to be overlooked, especially in adverse weather conditions. Counting for the ranking of the first FFSA GP2 French Cup, Le Mans will undoubtedly mark the culmination of a very open season. Dorian Breisacher, Gwenaël Foison and Xavier Petit, are currently leading the rankings against Cormeilles Kurb by MD (Sodi / Rotax) of Franck Lavergne, Bastien Borget, and the Orsay GSK 2 Will Kart (Sodi / Rotax) of Mathieu Melet, followed by Jac-Kart (Sodi / Rotax) by Jacques Gauthier, Jean Letard, Gautier Brochard and Pierre-Lou Fleury. The British team of London Kookeli (Tony Kart / Rotax) are also registered in GP2 with Jason Jones, Chris Jeffs and Martin Pierce.

The 2017 24-hour karting programme will also include 24-Minute Youth, a competition reserved for drivers between 10 and 14 years of age in the FFSA Cadet category. The Historic Karts will not be forgotten with the famous Kart Legends who will carry out demonstrations on the Le Mans Karting International circuit.