Jack Doohan had a strong run at LeMans on the weekend, taking 5th in the OK-Junior final at round 3 of the CIK-FIA European Championship.

After qualifying 10th in damp conditions, Doohan (FA Kart/Vortex) won his first heat, then carded 21st, 4th and 9th to be ranked 12th overall and placing him on the sixth row of the grid for the Final.

Jack made the most of the opening laps, up to 5th by lap 5, but then fell to 9th a few laps later and had to do all the work again. He was 6th when a full course yellow was thrown late in the race and picked up one more position in the final 2-lap sprint to the flag, finishing just 0.983s off the winner.

The CIK-FIA European Championship weekend at Le Mans said that nothing has been decided yet, and the final races in Scandinavia at the end of July are going to be decisive. The French round was won by drivers that now can seriously aim at the titles in the last races which are going to take place in Finland and Sweden.

The Norwegian Dennis Hauger (CRG-Parilla-LeCont), the top driver after the qualifying heat stage of the OK, had to cope with a great rival: the Italian Lorenzo Travisanutto (Zanardi-Parilla). Travisanutto, in the Final, managed to gain an early lead and to set too fast a pace for the rest of the pack. Hauger trailed in his wake for a long time, but towards the end of the race he was overtaken by the Moroccan Sami Taoufik (FA Kart-Vortex), who was eventually the runner-up. Also the British Finlay Kenneally (Tony Kart-Vortex) joined the battle and attacked Hauger. The duel between the two drivers obliged the stewards to give the Norwegian a penalty for an irregular manoeuvre, leaving to Kenneally the third place. The victory in Le Mans (above, the podium of OK) allows Travisanutto to gain positions in the Championship standings, right in the race where the category leader, the Spanish David Vidales (Tony Kart-Vortex), did not manage to enter the Final. 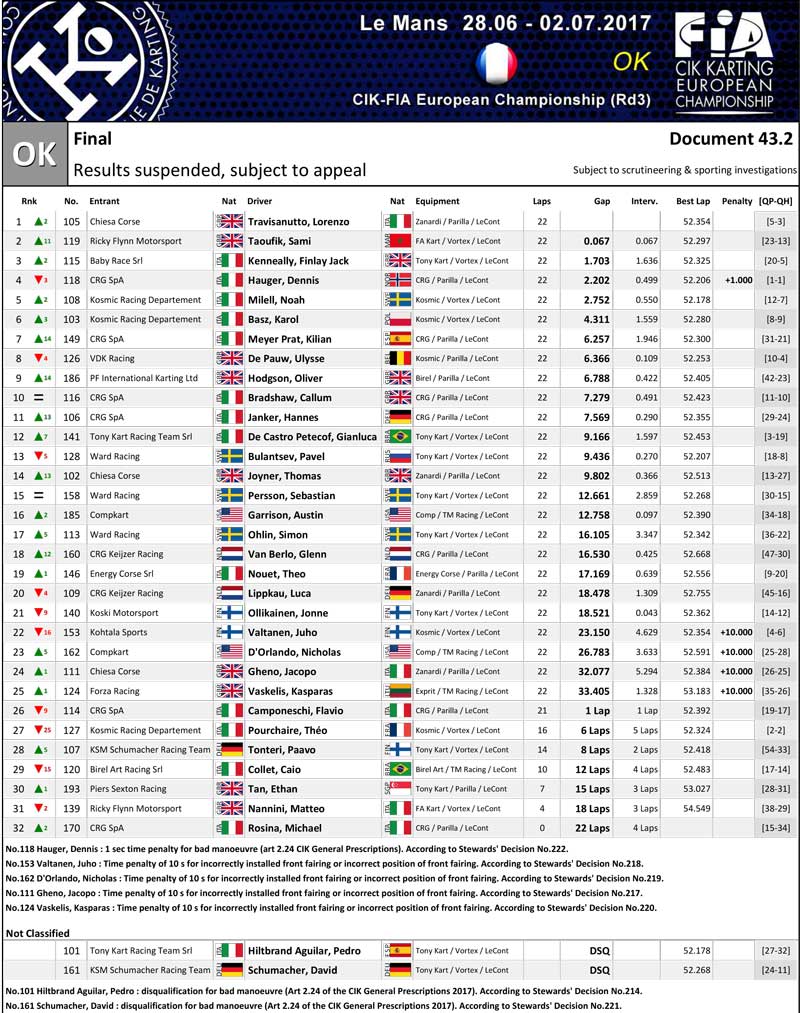 Ippolito is the surprising winner in KZ2

Paolo Ippolito (Lenzo-LKE-Bridgestone) won in Le Mans and he is now among the top drivers of KZ2. The Italian, who was in first position after the qualifying heats, was the toughest rival for his fellow countryman, Matteo Viganò (Tony Kart-Vortex), in the Final. Viganò gained the leadership of the race at the start, with Ippolito who managed to grab the second place after passing the Lithuanian Rokas Baciuska (Sodi-TM) and leaving the Italian Alessandro Pelizzari (CKR-TM) in fourth position. The final stage of the race was thrilling: Viganò was forced to pull over for an engine failure with only one lap to go. So, victory went to Ippolito (in the photo above), who achieved a well-deserved first position ahead of Baciuska and Pelizzari. 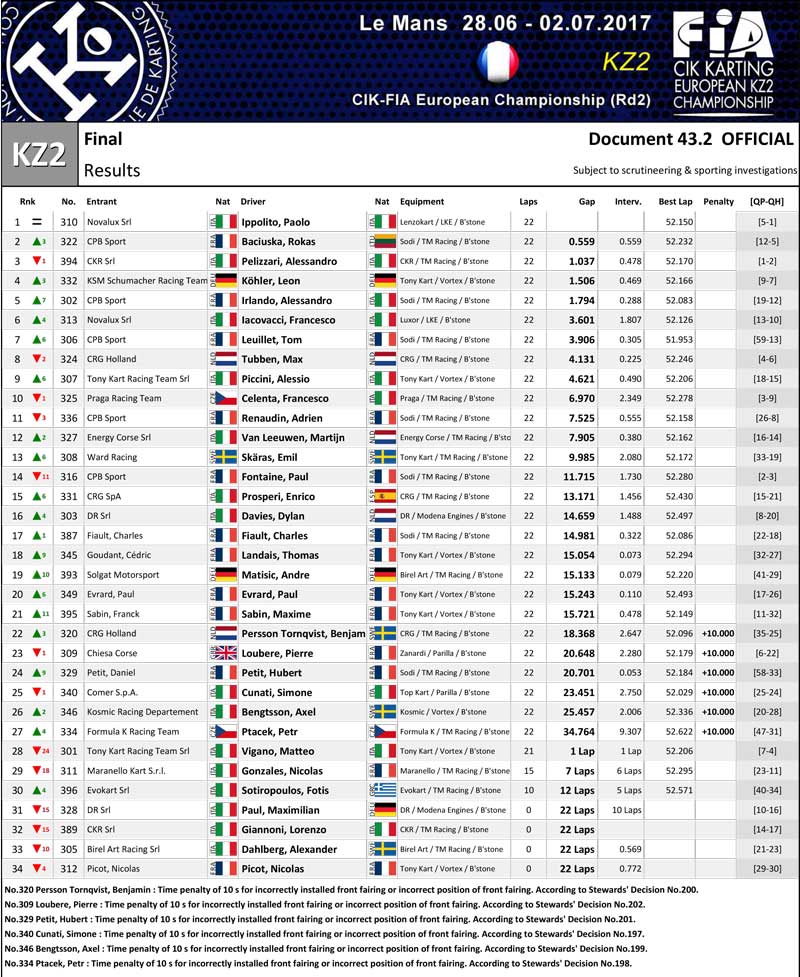 Also the OK Junior has a new winning driver: the German O’neill Muth (Zanardi-Parilla-Vega) won the round of Le Mans after a heated battle between four drivers. Muth had a long duel against his team-mate, the French Hadrien David (the best of the qualifying stage), the English Jonny Edgar (Exprit-TM) and the Spanish Genis Civico (FA Kart-Parilla). During the Final, all these four drivers managed to gain the head of the race but it was Muth who, eventually, managed to cross the finishing line in first position. The tussle for the remaining podium positions saw David arriving in second ahead of Edgar and Civico. Above, the OKJ podium. 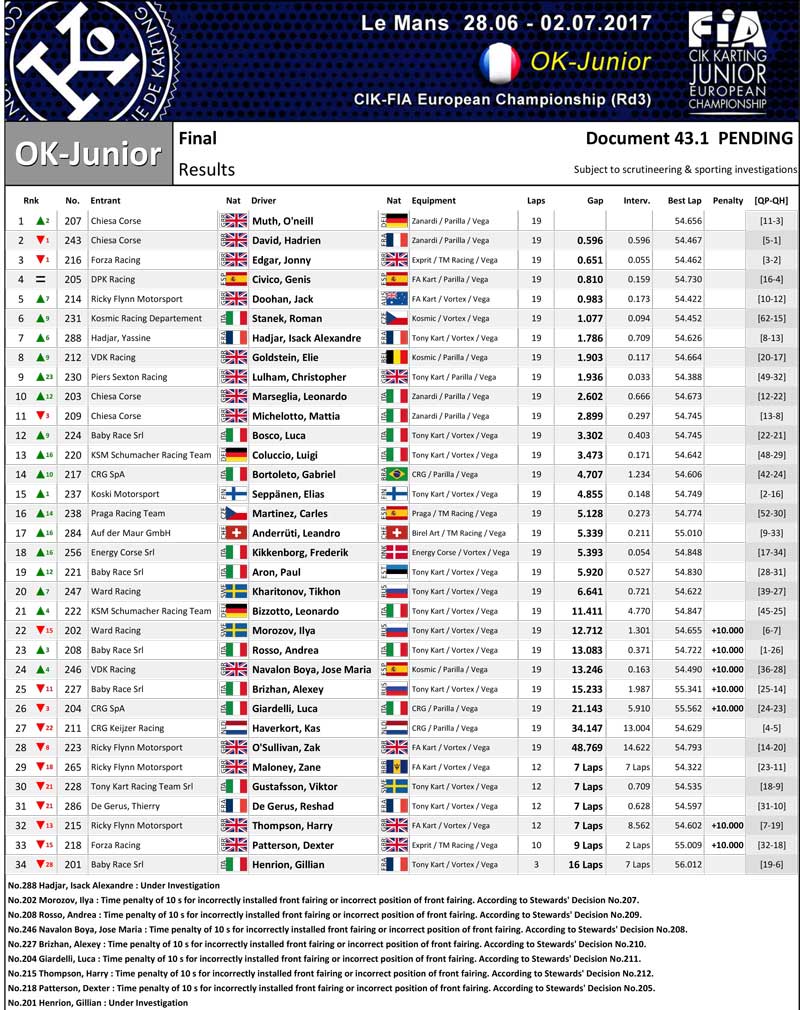 The Belgian Xavier Handsaeme (above, on the top of the podium) won the second round of the CIK-FIA Karting Academy Trophy. He gained the leadership of the Final at the start and kept it until the end. Behind him, the tussle for the other top positions had serious consequences on the front kart fairings. Some drivers were hit by penalties, among them the Spanish Ayrton Fontecha and the English Alexander Simmonds, who lost their second and third place. So, the remaining steps on the podium were occupied by the French Sami Meguetounif – the best in qualifying – and the Danish Oliver Skov Skjellerup, second and third respectively (all drivers on Exprit-Vortex). 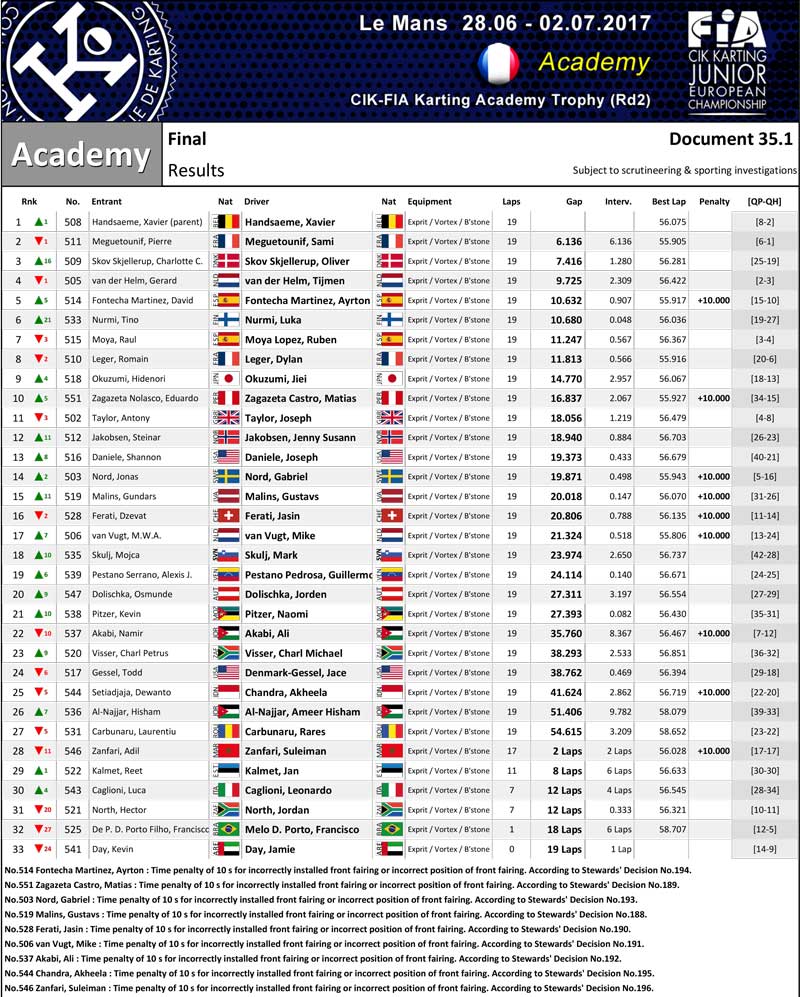