Jack Doohan will be hoping to capitalise on the speed he showed at the previous round when the European Championship contenders hit the track at LeMans in France this weekend.

At round two in Spain, Doohan qualified third and set fastest lap of the OK-Junior final, however heat race DNFs and a nose-cone penalty saw him leave the round earning zero points.

Jack sits 28th in the Championship (of 67 competitors) with two points from the opening round in Italy.

He will once again race the Ricky Flynn Motorsport FA/Vortex #214. 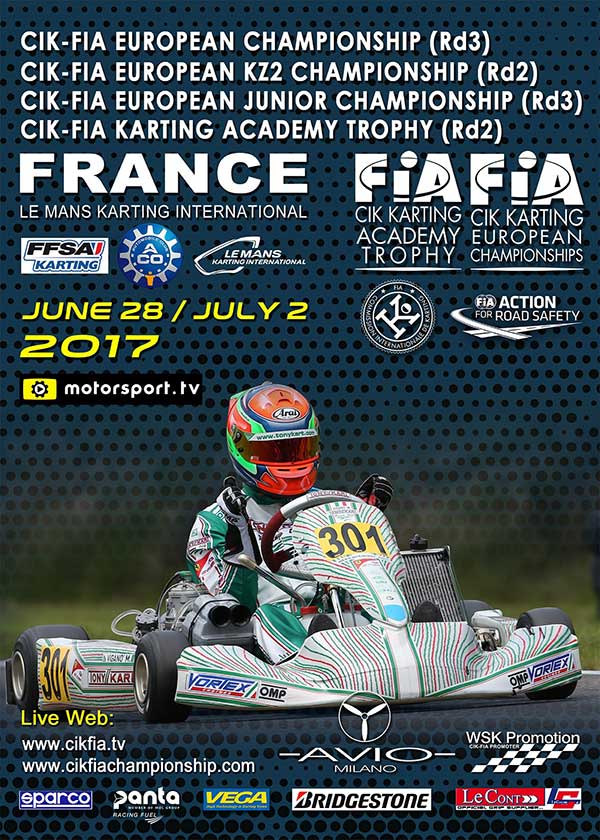 With nearly 300 Drivers in four categories, the CIK-FIA Competition at Le Mans is set to be crucial for the awarding of four major titles. While the Le Mans circuit has played an undeniably attractive role, many Drivers have also been eager to compete in a good Race in OK and OK-Junior thanks to Wild Card entries, demonstrating that demand is strong for these new generation categories.

Le Mans will mark the mid-season for the CIK-FIA Karting Academy Trophy as well as for the European Championships in the OK, OK-Junior and KZ2 categories. The sporting challenge is about to gather one of the biggest fields of the year for an exceptional Competition on the 1384 m of the French track from 29th June to 2nd July, 2017. The theatre for the CIK-FIA World KZ Championship in 2015, the Le Mans Karting International circuit will benefit from the aura of the famous 24 Hours organised since 1923 and the multiple World Karting Championships which took place on the Alain Prost circuit in the 1970s-1990s. Almost 300 Drivers from 50 nations on the five continents will compete next weekend at one of Motor Sport’s sacred places. Italy is in the lead of the most represented countries with its 48 Drivers ahead of France (34), Sweden (24), Germany (21) and Spain (21).

The 2017 edition of the CIK-FIA Karting Academy Trophy began with the domination of two Dutchmen Mike van Vugt and Tijmen van der Helm against Belgium’s Xavier Handsaeme on the Genk (BEL) track. If the leader wins again at Le Mans, the Trophy will have every chance of returning to him. The battle is likely to be intense between these young talents aged between 12 and 14 years driving their one-make Exprit / Vortex / Bridgestone karts. The chances of revenge are very real for those in the top 10 while the progress of all produces battles at all levels of the ranking.

Following the same schedule, the CIK-FIA European Junior Championship has also produced some surprises between newcomers and those who already have one or two years of experience. The provisional top five includes four Brits and a Brazilian. Harry Thompson (FA Kart / Vortex / Vega) took a slight lead against Jonny Edgar (Exprit / TM Racing / Vega) and Christopher Lulham (Tony Kart / Parilla / Vega) in Spain. Gabriel Bortoleto (CRG / Parilla / Vega), who did not score points in Spain, remains 4th in front of Zak O’Sullivan (FA Kart / Vortex / Vega). Mattia Michelotto (Zanardi / Parilla / Vega) moved up to 6th thanks to his victory in Oviedo. Other fast Drivers who have not yet achieved the results they hoped will be observed during a very open Competition.

Due to the large number of participants, the Le Mans schedule has been adapted. Qualifying Practice will take place on Friday 30th June from 15:45 to 18:15, the Qualifying Heats, 36 in total, will follow until Sunday 2nd July at 12:35. The four Finals will conclude the Competition from 13:30 to 15:35.