The second round of the KZ European Championship held in Belgium at Genk saw another victory going to CRG, TM and Paolo De Conto. This was another victory obtained showing the muscles, even more than in Sarno. This victory, or better this triumph, confirms Paolo De Conto, CRG and TM on top of the European Classification in the most powerful international karting category. 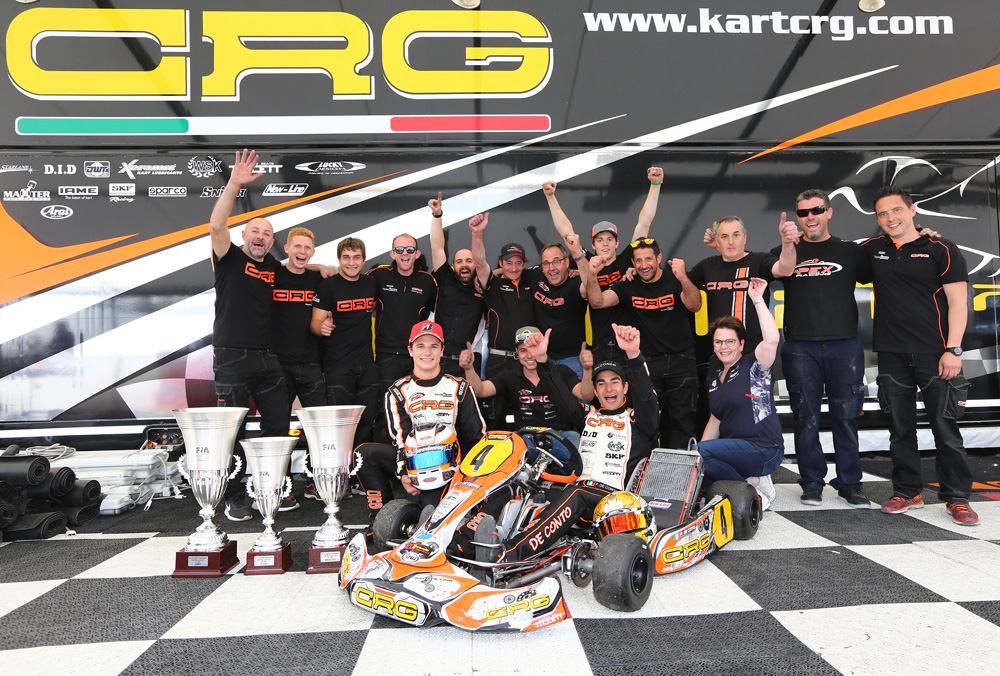 Reigning world champion Paolo De Conto has always believed in his chances of taking the victory, despite the weekend of Genk kicking off with the eighth time in qualifying. De Conto managed to recover climbing up to P2 in the first two heats. A hiccup in the third one, due to a contact at the start, seemed to put the ambitions of the Italian driver at rest, but De Conto managed to get the lead showcasing his power in the Final. The Italian driver crossed the line as first, with his main rival, the young Dutch Marijn Kremers following him like a shadow on BirelArt. The podium was completed by CRG’s Dutch driver Stan Pex of CRG Holland, who was third at the end of a bold performance.

“The inconvenience in the third heat – Paolo De Conto commented after his win – did not allow me to start from the front row. In fact, I was given a 10s time penalty due to the dropped front fairing following my tapping to Pex at the start, but despite having to start the Final from the second row, I was aware of having what it takes to win. I would have never expected Kremers to keep such a race pace from lights to flag, and therefore it has not been easy to end ahead of a rival always in my slipstream. It has been a long an tight final, but I managed at best the whole package and I got the victory. Two rounds are still to be run in this Championship, certainly the two wins make me the favourite to the final win, but it is too early to even talk about this.”

The third step of the podium went to Stan Pex, also on CRG-TM, at the end of an absolutely positive weekend. The Dutch driver commented his race in this way: “I finished in P3. The start was good, I started from the sixth position and I gained directly P4, I had a good speed so I passed Abbasse, who was also fast and he stayed all the race behind me, but in the end I was quicker so I finished third. I am very happy.”

Among the other CRG drivers on track, Mirko Torsellini was 12th, while Jorrit Pex had to retire early into the race due to an incident, and Andrea Dalè did not finish either due to a technical problem at lap two. Julien Deharte was 17th.

TROUBLED START IN THE KZ2 OPENER

The KZ2 final of Genk, first round of the European Championship of the cadet category, has been a bit mean with satisfaction for CRG due to some racing episodes. The first of CRG drivers was the Swede Benjamin Persson Tornqvist of CRG Holland. He crossed the finish line in 12th position, while the Spanish Gerard Cebrian Ariza was 17th, the Swede Andreas Johansson of CRG Holland 19th and Alessandro Giardelli closed his effort in P20, after a good recovery following qualifying heats.

The Spanish driver Enrico Prosperi was 25th. Alexander Schmitz of CRG Holland and Fabrizio Rosati of SRP Racing Team did not finish instead. The Brazilian Gaetano Gomes Di Mauro also had to retire early on. Kay Van Berlo of CRG Keijzer Racing, Max Tubben of CRG Holland, Fabian Kreim of CRG Deutschland, Max Weering of CRG Holland and Julien Deharte could not qualify for the Final.