This Saturday will see the return of the four hour karting Enduro, to be hosted by Shamick Racing at the Go Kart Club of Victoria, Port Melbourne.

The Shamick Racing TAG Senior class will see a full grid capacity of forty teams take part in the gruelling race which will see two drivers team up over the course of four hours with three mandatory pit stops required.

The lineup is headlined by Bathurst 1000 winner Steve Richards (Triple 8 Racing) who partners up with son Clay after previously sharing a race car with Craig Lowndes during this years Pirtek Enduro Cup.

The karting contingent is lead by two former World Champions in Cody Gillis & Troy Woolston who will be against each other, but no doubt be leading candidates as they have extensive knowledge of the Todd Road Circuit.

Drivers will also be vying for the DPE Kart Superstore pole award which will see $250 go towards the fastest qualifier.

In total there has been over 65 Australian Kart Championships won from the eighty drivers which will be the most successful starting grid in recent history.

The Focus on Furniture KA3 category is stacked with talent. Fresh off a victory in Las Vegas for the SuperNats in November, James Wharton is looking to round out 2018 with victory in the 45 minute junior Enduro. Wharton’s main challengers will come from two time State Champion in 2018, Emerson Harvey & former state champions Hugh Barter & Fletcher Harris. With $1000 to the winner these kids won’t leave anything on the table.

Our final category is the AA Semi Trailers Cadet class which will see both Cadet 9 & 12 race together for individual honours. Current Australian Champion Harry Arnett will be one of the favourites, but the Bendigo driver won’t have it all his own way with competition set to come from Cadet 9 Australian Champion Lewis Francis & runner up Peter Bouzinelos. Local drivers Jesse Lacey, Cadel Ambrose and Kristian Janev will also be drivers to watch.

Qualifying and racing will take place from 9am Saturday 15th of December with entry to the race circuit free.

There will be live entertainment (DJ), Porsche Carrera Cup cars on show, food & drinks on offer as well as a silent auction for Supercars Merchandise throughout the day. 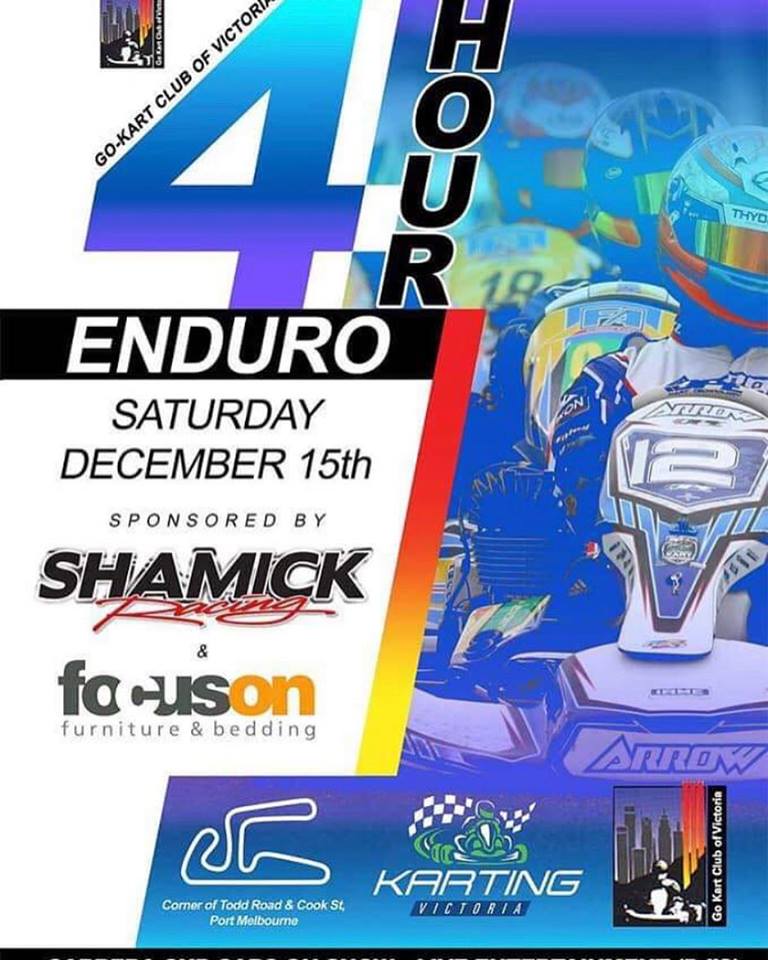