Australia’s best kart racers are set for the test of Australia’s newest karting circuit at The Bend Motorsport Park, Tailem Bend this weekend as the National Rotax Pro Tour comes to a conclusion for 2018.

The event will double as the unveiling of the Australian team for the Rotax Max Challenge Grand Final, due to be held at the end of November in Brazil. It is also the annual Jason Richards Memorial event where the Jason Richards perpetual trophy will be awarded to the DD2 winner (the late Supercars driver competed in DD2 at a Rotax Pro Tour event in 2010). It will be the first ever event held on the new karting circuit at The Bend Motorsport Park – which is the only one in Australia that meets international standards.

The battle for Rotax Light is set to go right down to the wire, with four drivers in with a chance at winning the Series. After the previous round, Ben Jurczak assumed the lead by just 20 points in the Race to the Worlds over Reece Cohen, however Kiwi multi-round winner Joshua Hart and Leigh Nicolaou have the chance to secure one of the two places in the Australian team. Adelaide front-runner Paul Pittam returns to Rotax Light this weekend for the first run at The Bend and is expected to be typically fast.

Current Series leader Jaiden Pope (pictured above) is looking to secure his first team Australia spot in Junior Max, but will be pushed hard by William Seal, Ryan Wood and Luke Pink who are all in contention to wrap up one of the two places on the team. Locals Reuben Goodall and Ryan Morgan will be aiming for strong results on home soil in the first ever race at The Bend.

Rapid South Aussie, Jimmy Piszcyk will be hard to beat in Mini Max, while he’ll be joined by another South Aussie in Anthony Capobianco, which will be just his second Pro Tour event. Costa Toparis has all but secured the Mini Max place on the Australian team to Brazil.

In Rotax Heavy, local driver Andrew Cash will be looking to give the regular front-runners a run for their money making his return to the Pro Tour, while runaway leader Lane Moore is expected to wrap up the Series at The Bend.

In the DD2 category, Queensland brothers Damian and Lucas Ward are set to battle for supremacy at The Bend. The duo have wrapped up the two most recent rounds and Damian leads the chase for the second seat to the World Challenge after fellow Queenslander Ryan Kennedy wrapped up the first seat earlier this year. Troy Woolston is looking to round off his outstanding season in DD2 Masters in style, leading the Championship convincingly. Jason Pringle is within striking distance still of Woolston and he was the driver that ended the World Champion’s dominance earlier this year. Scott Howard has hit form in the back half of the season and enters The Bend in third, while Kris Walton will continue to push hard.

Walton’s son Max will be competing in the Micro Max category – which is the youngest group of drivers hitting The Bend, aged between seven and nine. Charlie Evans will be flying the flag for the Crow Eaters and the challenge for the seat in Team Australia is on between Peter Bouzinelos and Jake Rutkowski who have battled strongly all year. 26 points separate the pair entering the final round.

Practice for the final round of the Rotax Pro Tour begins on Thursday and continues Friday with qualifying and heat races Saturday, Pre-Finals and Finals on Sunday.

The event will conclude with the annual Presentation Dinner and Jason Richards Memorial Award presentation to be conducted within The Bend’s Welcome Centre on Sunday night. 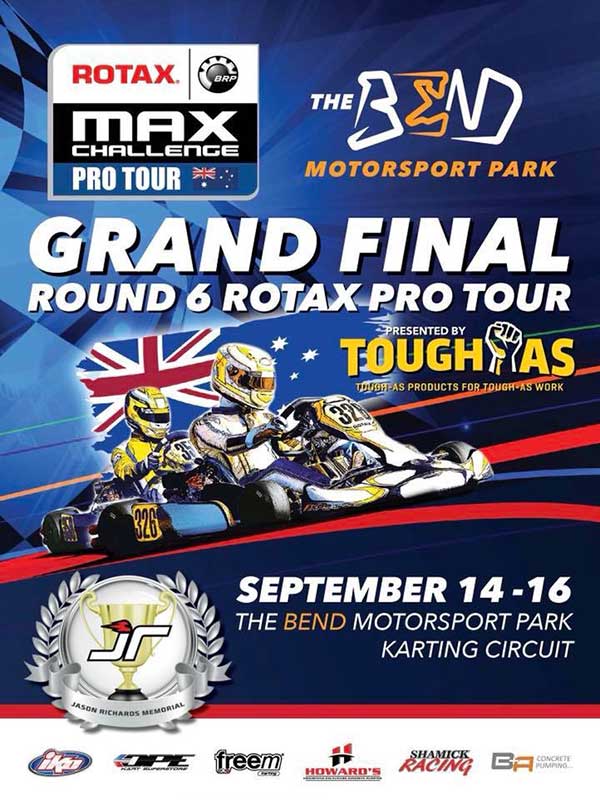 More information can be found about the Rotax Pro Tour at www.rotax.com.au.

This weekend’s event is being presented by Tough As.

Class Sponsors this weekend are: