Luke Wrigley will be flying the local flag this weekend at Dubbo’s round of the national Rotax Pro Tour Karting Series. Over 130 competitors will be lining up across the competition at the Lincoln County Raceway, with drivers as young as seven taking part. Dubbo born and bred, 18-year-old Wrigley compete against 32 other drivers in one of the most competitive classes in the Series – Rotax Light.

“I’m really excited that the Rotax Pro Tour is coming back to Dubbo,” said Wrigley. “It’s great for the club and will bring something different to the track. For me heading into this round, I’m aiming for a top 10 finish. If we could do that, I’d be really happy, anything better would be great.

“I did a weekend of testing about a month ago with my team that includes my Dad and Greg Cusack, who make it possible for me to go racing. I feel as though we gained some valuable information about the J&A Kart Tuning built motor and how it performs.” 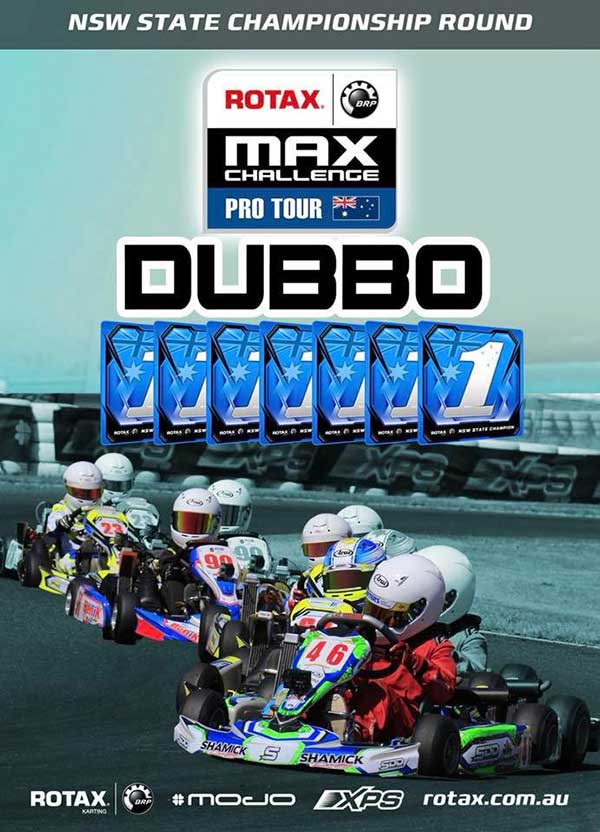 Victorian, Troy Woolston will be returning to Dubbo as the current World Champion in DD2 Masters. Woolston won that Title in Portugal at the end of last year and started his 2018 Title defence off by being undefeated at the opening round in Melbourne. The hotly contested DD2 Masters field will see Woolston taken on by Jason Pringle – who’s represented Australia on numerous occasions at World Finals and Matthew Wall, who is aiming to get his 2018 season on track.

Former Australian V8 Utes Champion, Kris Walton will also be making the trip to Dubbo to be part of the 16 kart field as will diminutive Victorian mother of two, Barbara Anagnostiadis and Australian Captain from last year’s World Finals, Scott Howard.

Kiwi, Ryan Wood leads the Junior Max Championship after winning the first round in Melbourne. He is expected to have Victorians James Wharton and Jaiden Pope breathing down his neck – both keen for redemption after round one which saw them score little final points due to an on-track indiscretion.

Tom Williamson Motorsport’s Jack Grambauer will be looking to back up his third placed finish from round one while Praga driver, Hugh Barter is looking for more good form having moved to Juniors this year.


Goulburn’s Costa Toparis enters this weekend on top of Mini Max after his breakthrough win at round one. Sydneysider Cody Maynes-Rutty got his season underway strong in Melbourne and is third on points, Jordan Shalala joins the Series for the first time and Aiva Anagnostiadis joins her mother in the event and will be one of six fast females racing in Dubbo.

Gold Coast resident, Lane Moore returned to competition at the opening round, taking the Rotax Heavy victory. He has been working hard over the off-season to return solidly from an injury sustained early last year. Fellow CRG chassis drivers – Newcastle driver Zac van Leeuwestyn started his season strong and he will be joined by brother Sam this weekend.

Another Queenslander in Ryan Kennedy is anticipated to be at the front of the Rotax DD2 field. Kennedy has been a member of Team Australia at the World Finals the last few seasons and finished second at the previous round. Damian Ward made a comeback in Melbourne and has proven strong in Dubbo before.

ZCorse CompKart eight year old twins, Jaxson and Jenson Burns have improved significantly since making their Rotax Pro Tour debuts 12 months ago and will be real contenders in Mini Max – for the youngest drivers in the sport. Max Walton in the third ZCorse Kart has been on a rapid rise as well. Victorian Peter Bouzinelos scored a podium at the first round, while Kiwi Jay Unwin will be one of a strong New Zealand representation with no less than six drivers from the land of the long white cloud making the trip across the ditch.

Competition begins Friday with Practice, before Qualifying and heat racing Saturday with the event coming to a conclusion on Sunday.

Entry to the public at Lincoln County Raceway is free of charge and the track is located on the Newell Highway at Brocklehurst.

For those who can’t make it to the track, the event will be livestreamed on Sunday at www.facebook.com/rotaxprotour.