Duffy Livingstone who will always be remembered as the father of the Go Kart died August 13, 2017 aged 92.

Because of his sports car fabrication and racing activities, Duffy often consulted with his friend Art Ingels who worked at the famous Kurtis Kraft race car plant in Glendale California.

During a visit to Art’s place Duffy saw the Ingels’ creation; a small tubular frame attached to four wheels at each corner and powered by a lawn mower engine.

Art’s invention stuck in Duffy’s mind. He immediately started to construct his own version of Art’s machine after getting the OK from Art, one for himself and one for a friend. Then another friend wanted one and another and another.

Duffy then called Art and organised a play day at the Rose Bowl in Pasadena. The Rose Bowl at that time attracted quarter midgets and many of their owners also wanted to know where they could obtain these new fangled miniature cars. Duffy drew up plans and put together materials lists and started to supply kits of parts to the converts; Go Kart Manufacturing was born.

Incidentally there are YouTube videos of Duffy telling the story about the beginning of Karting and as well an entertaining recollection concerning the 1961 Nationals when the race distance was changed from 10 laps to 15 laps requiring Duffy to come up with an ingenious method of carrying extra fuel using an inner tube; all worth watching.

As well as karting Duffy enjoyed building and flying complex radio controlled multiengine model aircraft. As a young teenager back in Pasadena he worked in a model shop for 75 cents a week; there he developed a fondness for the scaled down aircraft.

Around the early 1990’s Duffy retired to Grants Pass, Oregon from Costa Meza, California with his second wife Deedee. There they kept 7 dogs at one time, rescued three donkeys, a couple of goats and a few sheep; Duffy sure liked things with four legs and four wheels. Later Duffy and Deedee would relocate to Ooltewah, Tennessee.

In 1939 aged 14 when he started working in the Pasadena model shop his given name of Frank gave way to Duffy for some forgotten reason; however his massive contribution to the early days of the sport of Karting will never be forgotten. 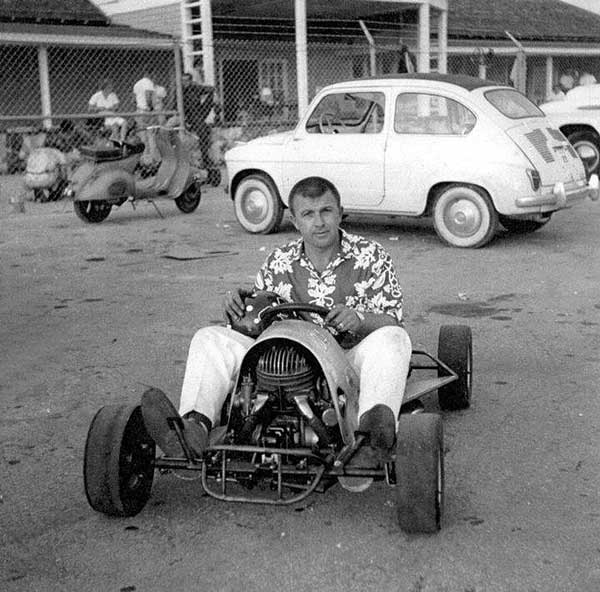