The venues for the events that will form Karting Australia’s National Championship and Series have been confirmed.

As already announced, the SP Tools Australian Kart Championship will return to the Ipswich Kart Club for the 2019 opener on February 15-17.

Round Two of the Championship will be hosted by the Newcastle Kart Racing Club in New South Wales on March 29-31 ahead of Round Three in South Australia at the Monarto Karting Complex.

The penultimate round of the Championship will be contested in Central Queensland at the Emerald Karting Club before coming to a thrilling conclusion at Port Melbourne on the first weekend in September.

The National Series – Rotax Pro Tour – will kick off with the traditional season opener in Melbourne on January 26 and 27 before the second round is hosted on March 9/10 in Sydney.

Queensland’s Ipswich Kart Club is the chosen venue for Round Three of the Rotax Pro Tour on May 4/5 before the National Series makes a return to Puckapunyal, home of the Eastern Lions Kart Club, in Victoria on June 22/23.

The Series then heads to the Warwick Kart Club on August 10/11 before the border city of Albury/Wodonga hosts the final round on September 14/15. 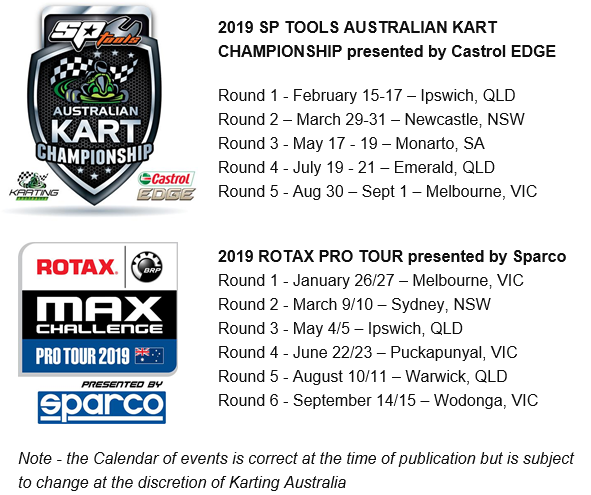