Karting Victoria has now confirmed its tyre options for 2019.

Club/zonal competition have specified compounds, as has the State Series. However, for ‘state cup/trophy’ level events, the organising club will need to nominate which tyre beforehand in the event’s Supp Regs.

We’ve heard from a reliable source (though yet to be confirmed) that the KA100 engine can race in the TaG125 Restricted classes in Victoria at the same weight as “all other engines” in the category (ie, 5kg less then the Rotax Evo). The weight parity will be reviewed throughout the year. 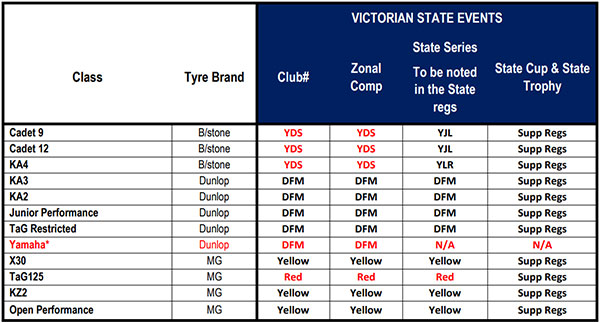 * Note: The Yamaha engines have been removed from the KA4 and KA3 Classes (these become solely IAME KA100 Classes).

TAG100 has been removed as a standalone Class. The Yamaha engines from KA4, KA3 and TAG100 have all been included in their own Class (Chapter 18 YAMAHA).

National level events will continue to be conducted on the Prime Tyres.

The organisers of the Victorian State Cup and the various State Trophy (ie City of Melbourne, North West Titles, etc ) would need to nominate which of the Prime or Option Tyre would be used for their event in the Supplementary regulations. Noting of course that those Supplementary Regulations must be approved by the State Association.