The Barossa Kart Club Champions for 2018 are below. Congratulations to all!

RIP DENISE MITCHELLL – (from Karting NSW) “Karting New South Wales was greatly saddened to hear of the passing of Denise Mitchell. Denise and Ken have been heavily involved in Karting for a number of years at State and National Level. Ken worked closely with Glenn Seton, Garth Tander and Leanne Tander drove for Ken. Ken was the State and National Technical Officer, with Denise always there for support. Denise and Ken both attended the opening of the National and KNSW State Office on the 26th October 2012 in Penrith. Karting NSW offer our deepest condolences to Denise’s family, relatives and friends.”

FINALLY OFFICIAL – It’s taken a while to come through, but Jake Sale has now received the official Guinness World Record certificate for his record breaking run last year (for the report on that, go HERE) 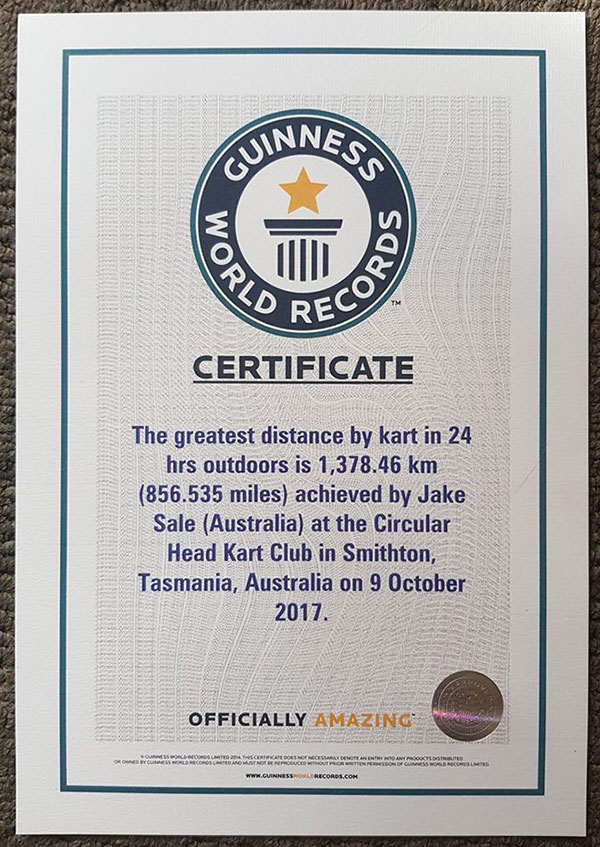 TV report of the effort:

CANBERRA CUP – Qualifying, 4 x 15 lap heats and a 20 lap final means lots of laps this weekend for the final round of the club championship, the Canberra Cup. 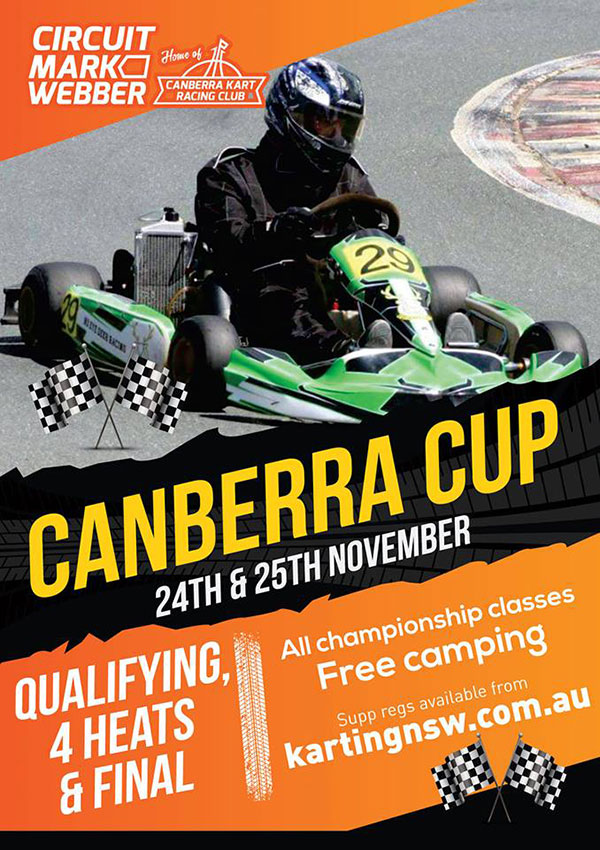 ALONSO. KART – Fernando Alonso punts an FA Shifter kart around his circuit in Spain. Not a lot of wheel work…

FEELING LUCKY – Take the ultimate care of your helmet with Lucky in a can, the Lucky Design helmet and helmet/visor cleaners. Call IKD (02) 47351344, email: sales@internationalkarting.com.au 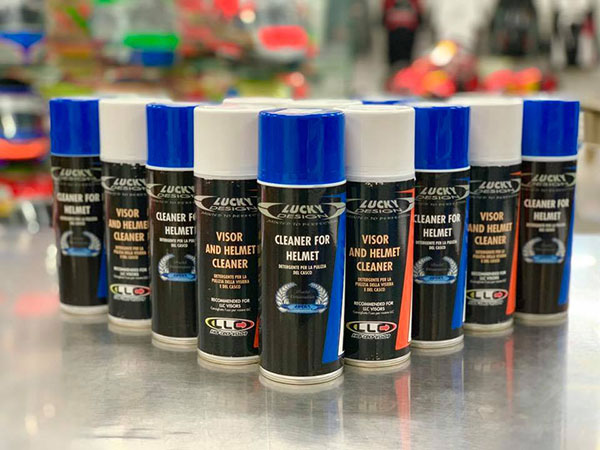 ORANGE TV – Watch WIN News’ coverage of the recent South Pacific Karting Title at Orange. KA3 Senior Light produced one of the races of the round, with Dubbo’s Beck Connell coming out on top.

PANTA PETROL – RKA has announced a partnership with Panta Racing Fuel for its F100 and Pro Clubman series in 2019. Panta will provide prizes for both retro classes at all four rounds, but they will be awarded in a different manner at each event, giving everyone a chance to win a 25-litre drum of Panta NS102. Panta Fuel Australia will officially launch its business and online platform next month.

SUPER CALENDAR – The UK SUPER Super One series calendar for 2019. The series runs two ’rounds’ per event, but does not always run the same classes at each of the 8 events. 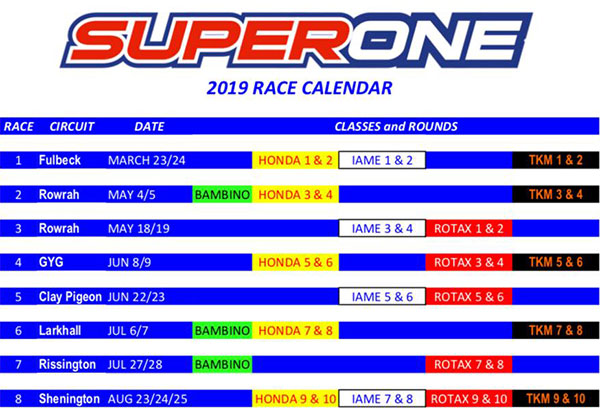 Showing dominance and speed all year and walking away second in the championship and securing himself a spot in Team Australia was Queenslands Ben Jurczak. It’s Ben’s first RMCGF appearance and you can bet Ben will give it his all. Good Luck Ben. 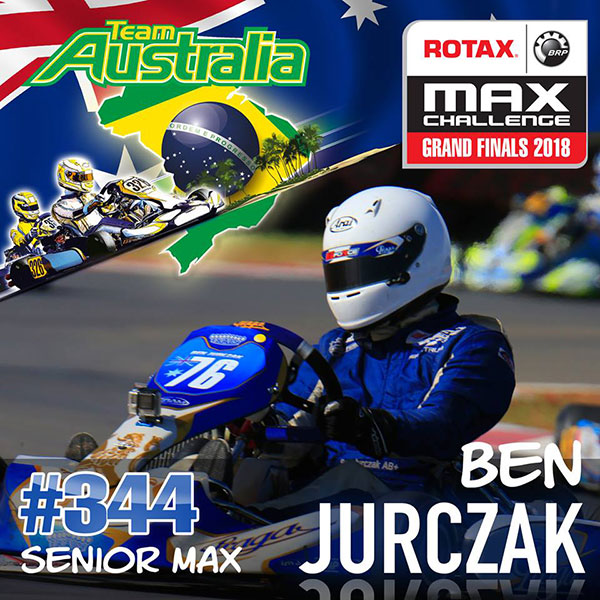 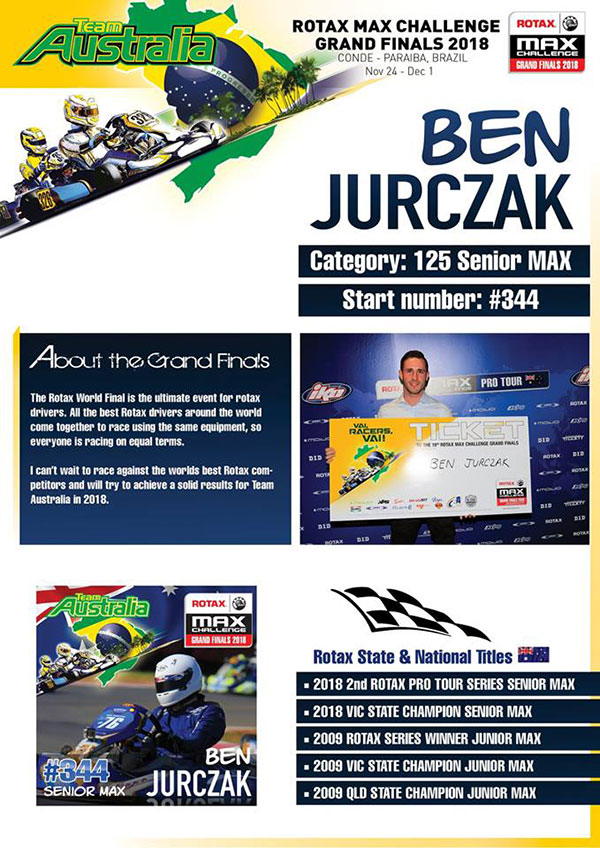 Introducing our 2018 Team Captain, Queensland’s DD2 Series Winner, Ryan Kennedy. Not unfamiliar to the RMCGF, Ryan is looking to become World Number 1 when he hits the track in Brazil later this month. Good luck Ryan! 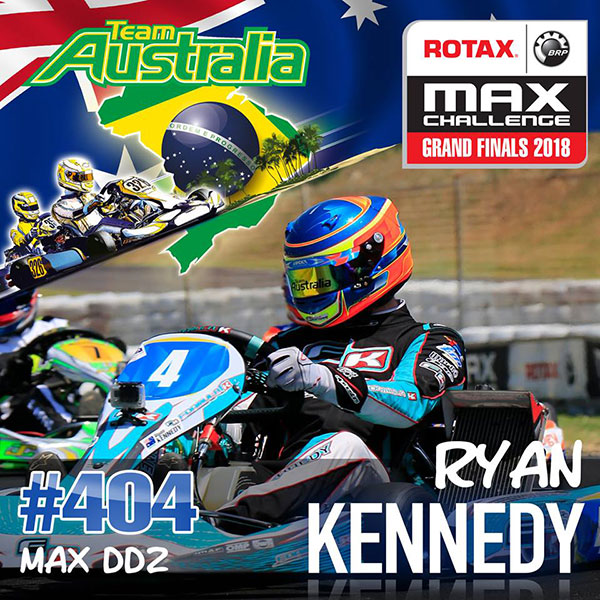 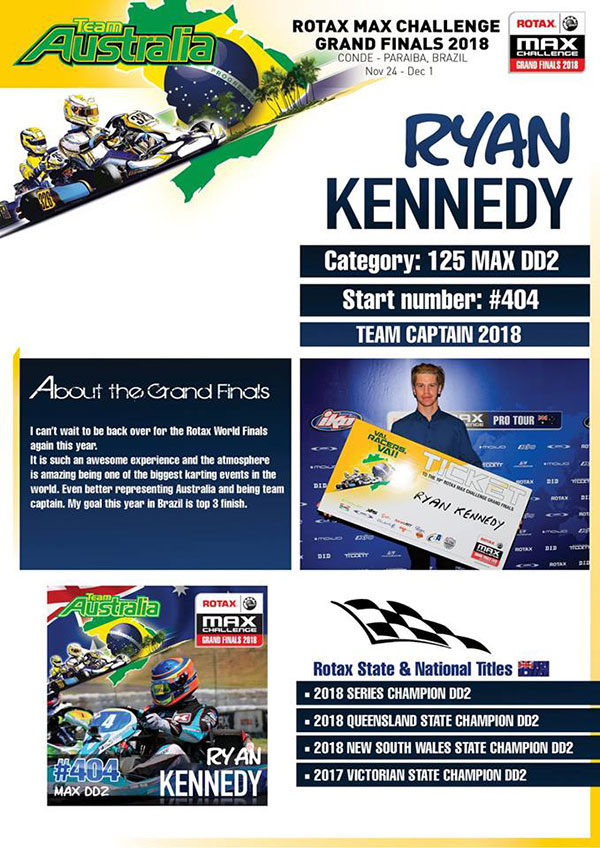 Competing in Junior Max at the Rotax Pro Tour, Kiwi Ryan Wood then made his seniors debut at the Gold Coast Race Of Stars in DD2 where after finishing an impressive second was awarded his RMCGF ticket. Good Luck Ryan! 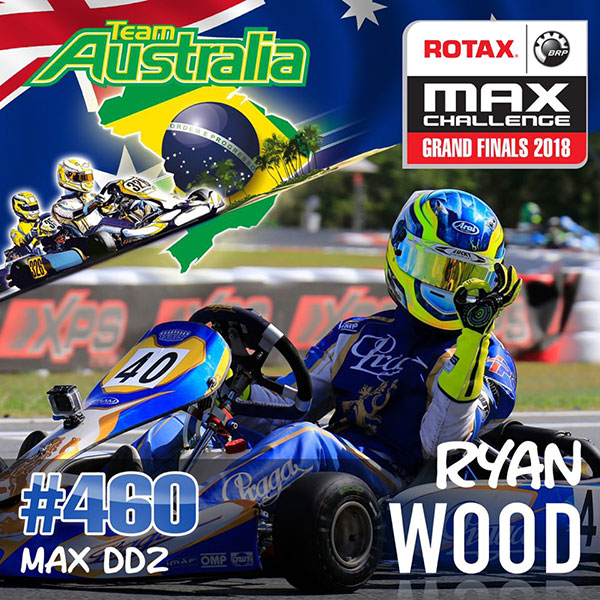 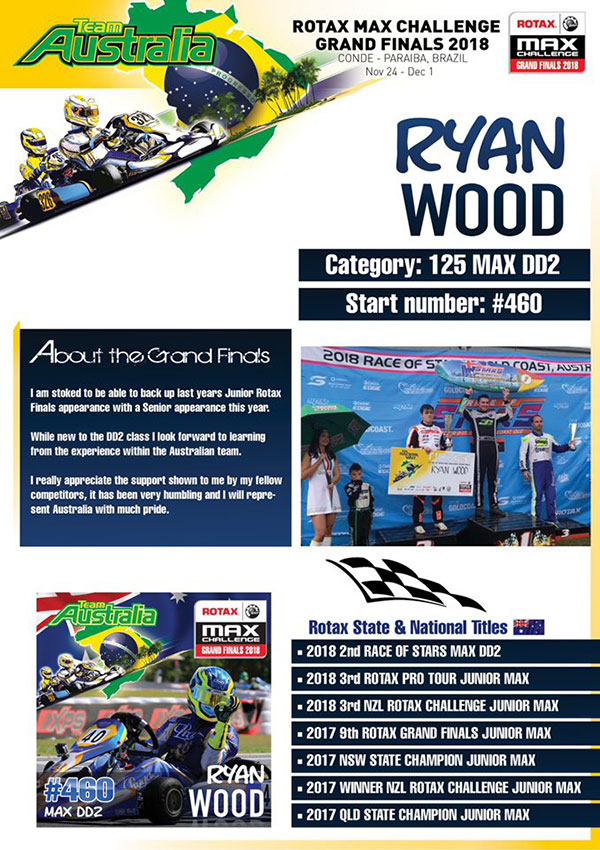 ITALIAN VENUES – After releasing the 2019 dates the other week, the venues have now been revealed for the next year’s Italian championship:

RIDE WITH DYLAN – Having raised more than $20,000 in 2018 to fight children’s leukemia, former karter Dylan Tavella was named an honorary ‘student of the year’ candidate for The Leukemia and Lymphoma Society. Tavella’s story is an interesting one, initially (but incorrectly) diagnosed with autism and enjoying a successful and highly publicised karting career – watch the video below (you’ll need to watch on Vimeo to access it): 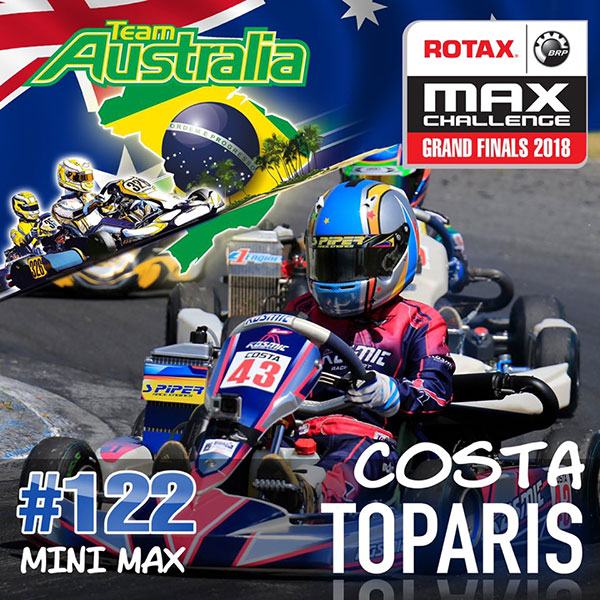 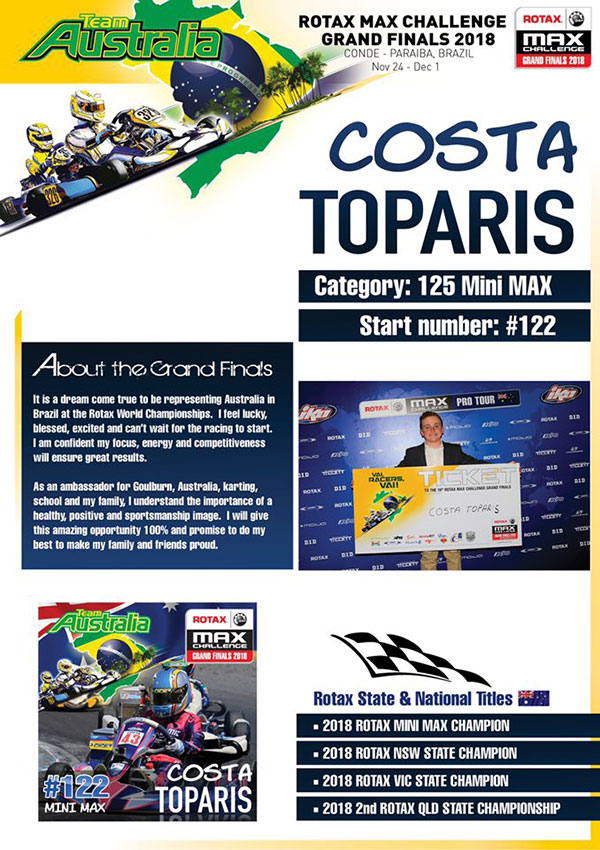 Making his third RMCGF appearance, but no stranger to racing on world class circuits, it’s Shamick Racing’s James Wharton. After earning his ticket over in Europe James is looking to better his third place podium with World Championship status. Good Luck James! 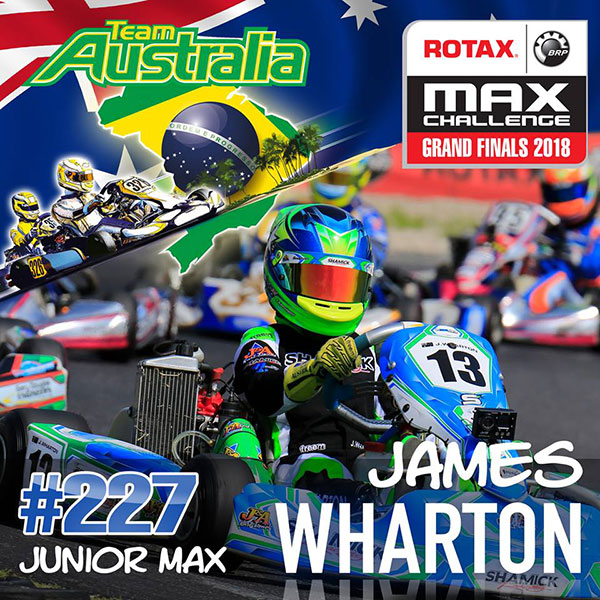 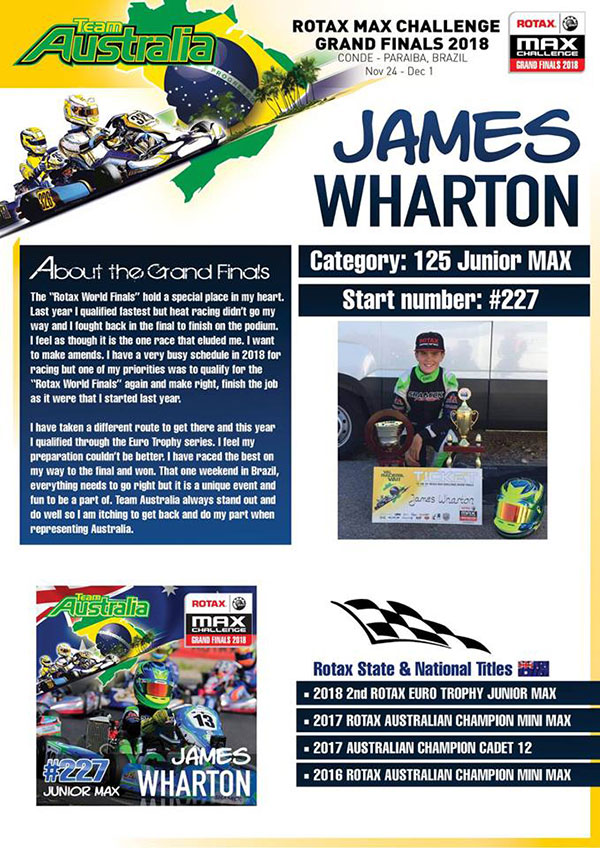 KID KIP – Pinched this from the Tiger Kart Club’s Facebook page. The club posted this photo of Kip Foster (from way back when he was a junior) to congratulate him on his victory in America. “Congratulations Kip Foster on a clean sweep to take his third Masters title at Supernats in Las Vegas”. From little acorns grow…

VALE JACK COLE – Earlier this month the Mount Gambier Karting Club posted the following in memory of long serving member and karter, Jack Cole: “Yesterday our club and it’s members, new and old, farewelled one of the club’s life members, and arguably the reason a lot of us started and or stayed with the sport. At a spritely 93 years old, Jack, along with his wife Gwen, were a vital part of our club and its success for a majority of, not only my time 30 + years within the club, but over the last 40+ years. A constant active member of our club and owners of the local kart shop, Jack and Gwen’s door was forever open and revolving as they supported, supplied and introduced members to our sport and friendly country club. Right up until the end, that mischievous twinkle in Jack’s eye was present and kept those around him on their toes. Still racing competitively into his 80s Jack was a role model for all of to who had the privilege to know him. The definition of a true gentleman racer if there ever was one. Forever remembered….. #9”

DRIVER PR – Russ Occhipinti finished 3rd in the 125-Open Gearbox Superkart State Title at Phillip Island last weekend. After missing qualifying due to an engine issue he steadily made progress with the kart setup and had strong pace by the end of the weekend. “Racing was tight all weekend with top class drivers entered. Still it was a good development weekend for the Ace Karts racing team and the Woodgate Evo chassis. The team is looking to put all the knowledge gained during a limited 2018 program forward into 2019.” Russ would like to thank Ace Karts for sponsoring the team, Woodgate Racing, John Gonzalez, Penrite oil and the Victorian Superkart club. 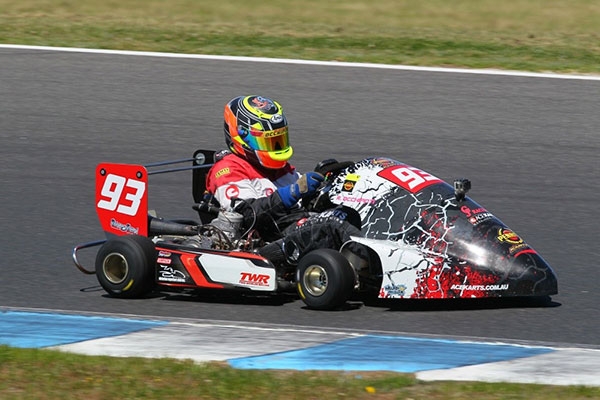 Making his debut at the RMCGF is Victorian Ashley Seward. Ashley was consistent throughout 2018 and has earned himself an invitation to race at the World Finals among 360 other drivers! Good Luck Ash! 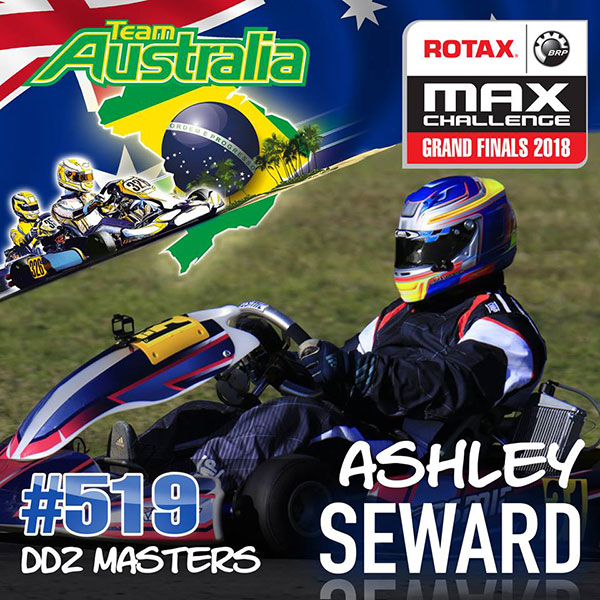 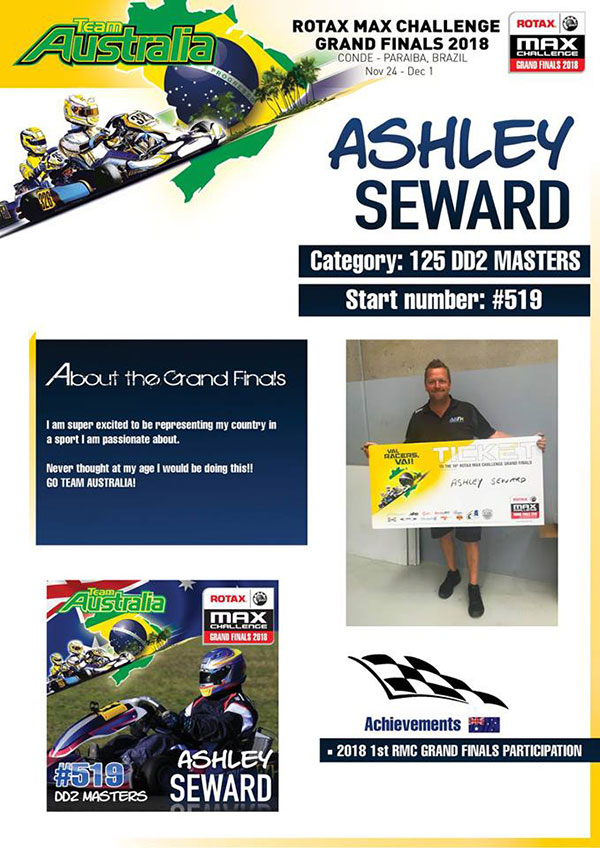 Definitely no stranger to RMCGF scene is Queenslander Damian Ward. After making a comeback to the Rotax Pro Tour, Damian started strongly with a podium in the opening round and maintained his podiums throughout the year! Damian will be one to watch. Good Luck Damo! 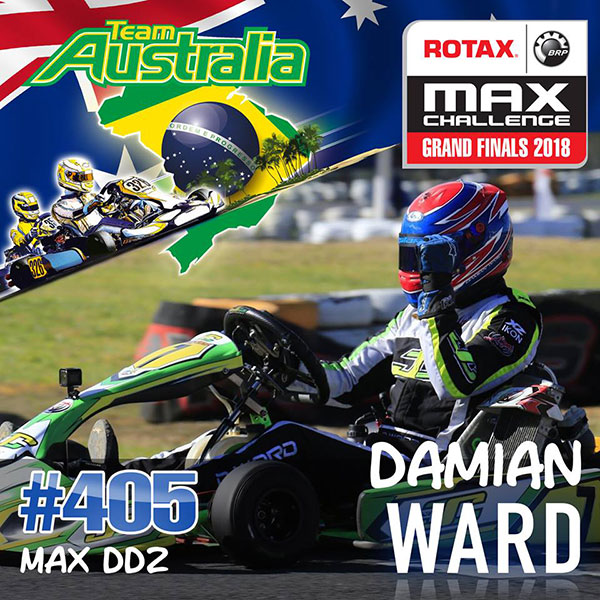 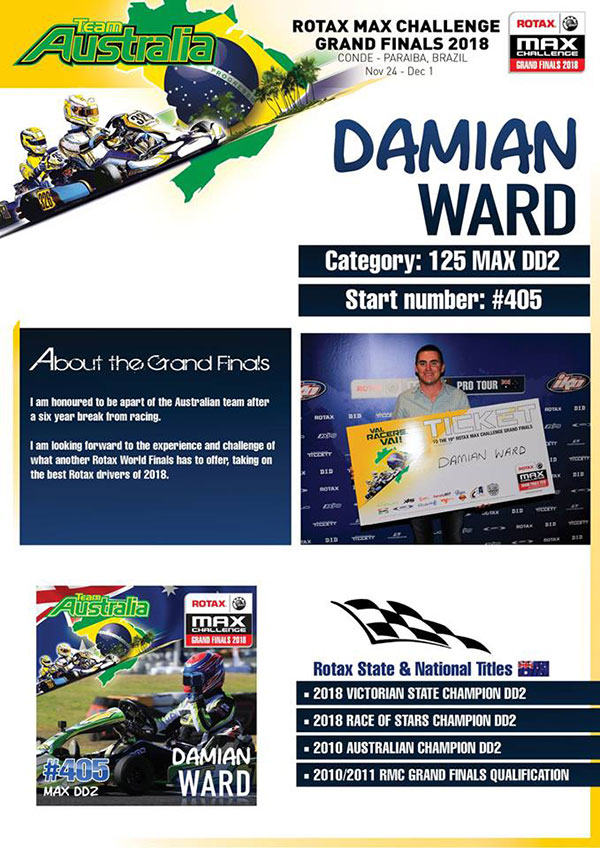 Having had quite the year in Junior Max it really came down to the wire at Tailem Bend, but William Seal came out with a ticket to the RMCGF in Brazil and its safe to say he cannot wait! Good Luck William! 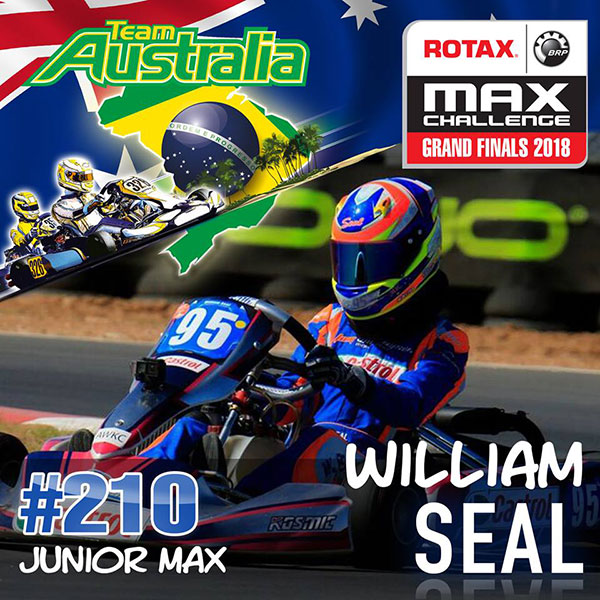 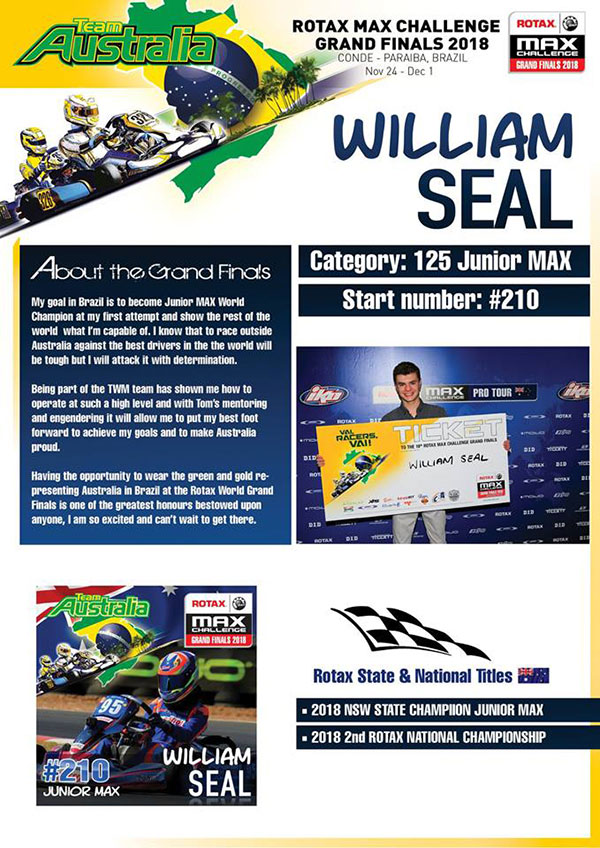 One of three DD2 Masters Team Australia representatives is New South Welshman Terry Hanly. Having shown his capabilities at Dubbo, where he poled the NSW State Title, Terry is very much looking forward to his first appearance at a RMCGF event. Good Luck Tezza! 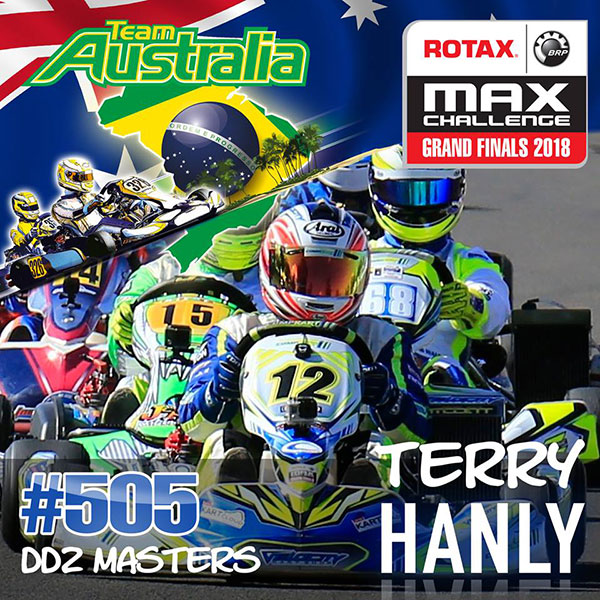 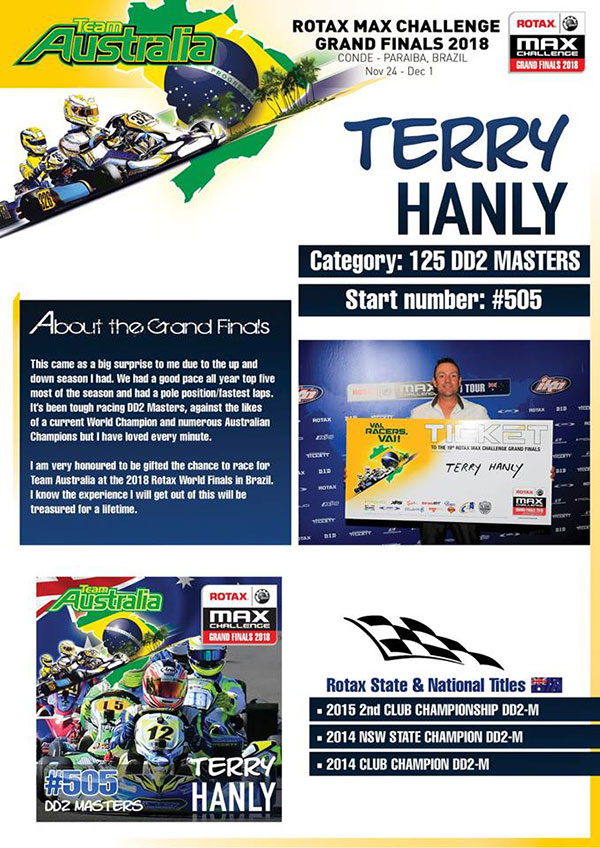 Trevor Whitby got the shock of a lifetime when he was announced as a member of Team Australia and the room erupted with excitement. Trevor Whitby, we wish you good luck and hope you enjoy the experience at your first RMCGF! 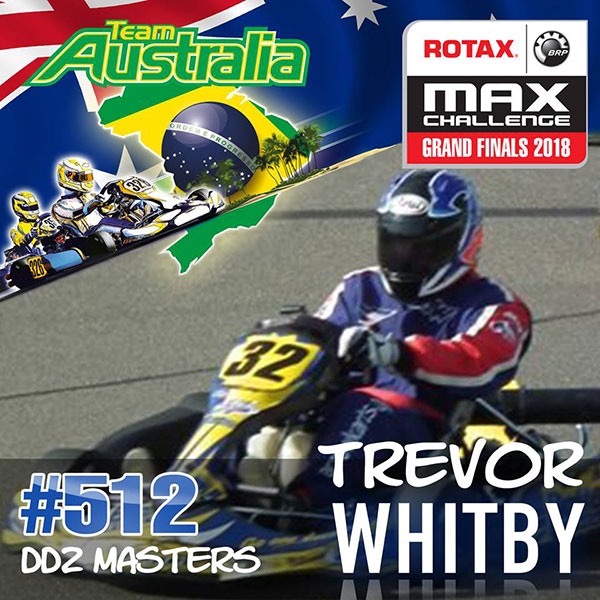 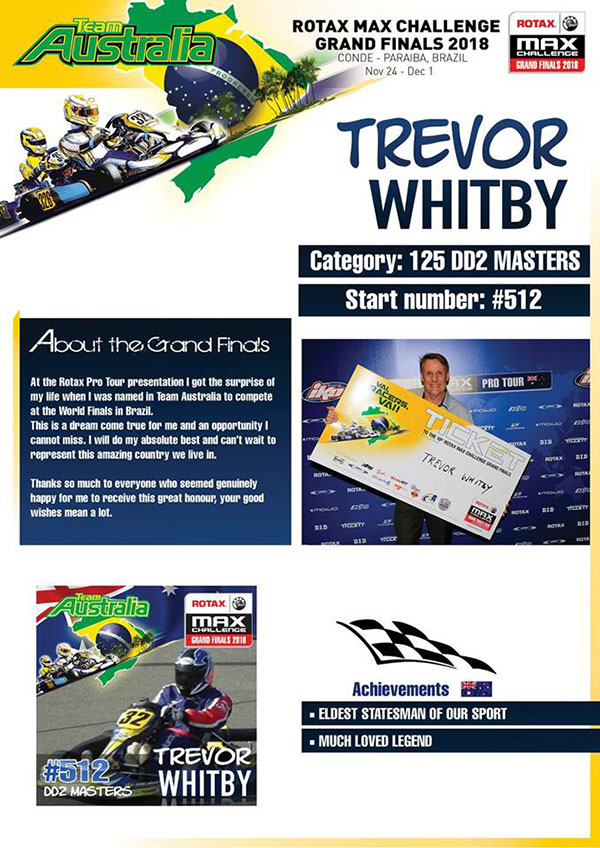 Josh Hart of NZ will be competing at the RMCGF for the first time as an Australian Team Driver. Having finished on the podium when representing his home country, let’s see if Josh can become World Number 1 in 2019! Good Luck Josh. 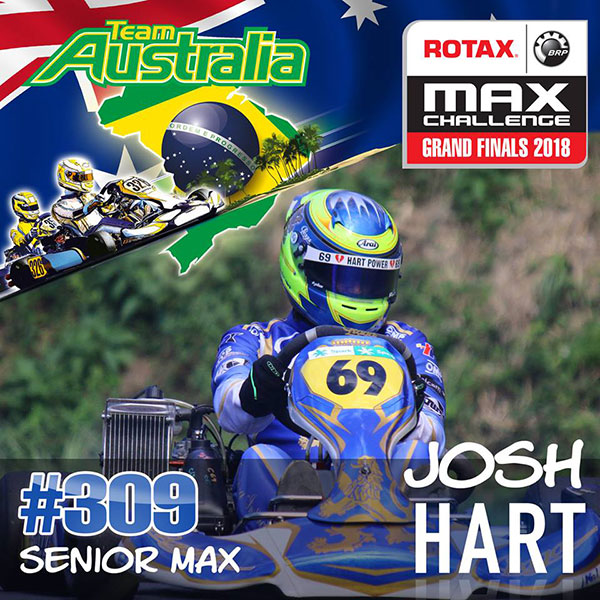 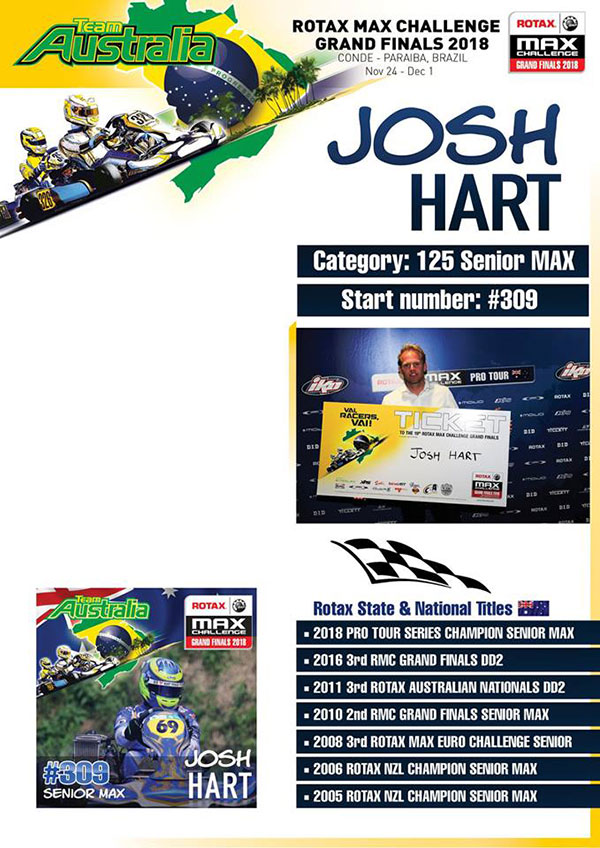 WSK THIS WEEKEND – The third and final round of the WSK Final Cup is this weekend at Adria Karting Raceway. Follow the event via live timing & live stream on the WSK website HERE.

“The Jamaican driver Alex Powell (Energy-TM-Vega) is currently leading 60 Mini at 169 points, but he is chased by the Belgian Ean Eyckmans (Parolin-TM) at 137 points. A neck and neck race is all set to take place in OKJ between the British driver Taylor Barnard, who totalled 143 points so far, and the French Marcus Amand (both on KR-Parilla-Vega), as the latter is only 3 points short of the leader. A similar gap splits the top two in KZ2. The French Adrien Renaudin (SodiKart-TM-Bridgestone) leads the classification at 111 points and is followed by his fellow-countryman Emilien Denner (KalìKart-TM) at 108. In class OK, Lorenzo Travisanutto (KR-Parilla-Bridgestone) is on top at 141 points, while the Scot Dexter Patterson (KR-Parilla) closed in and reached level 109 points.” 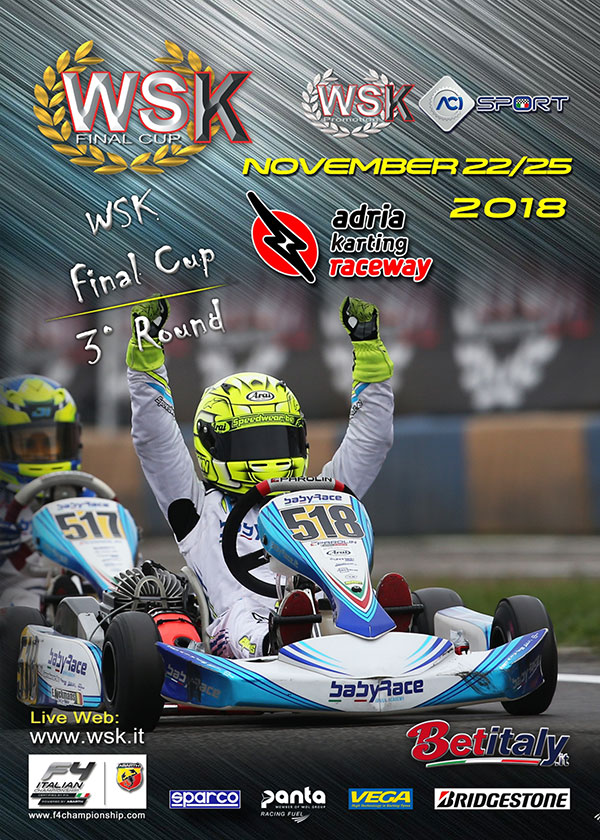 TEAM OZ SUITS – Here’s the look Team Australia will wear at the RMCGF in Brazil. Made by OMP, the race suits incorporate the Australian flag, traditional Aussie green & gold plus incorporation of an indigenous element to the design. 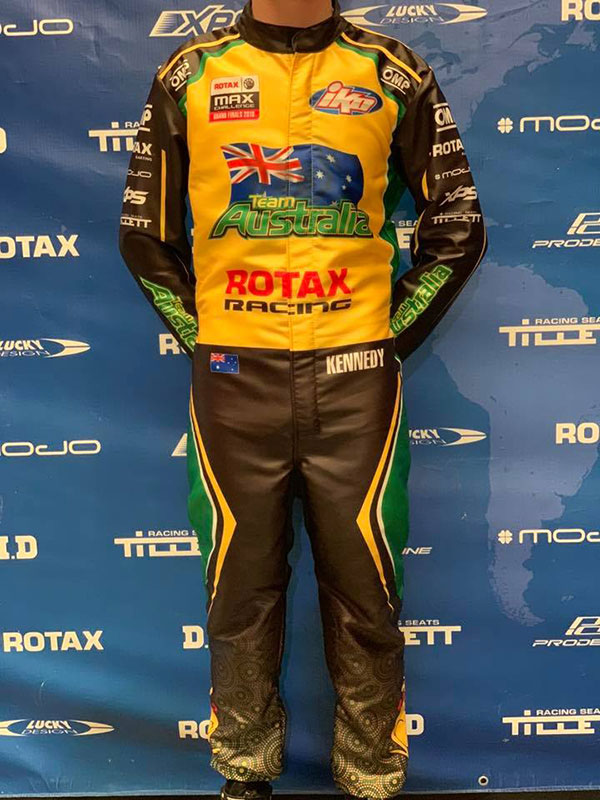 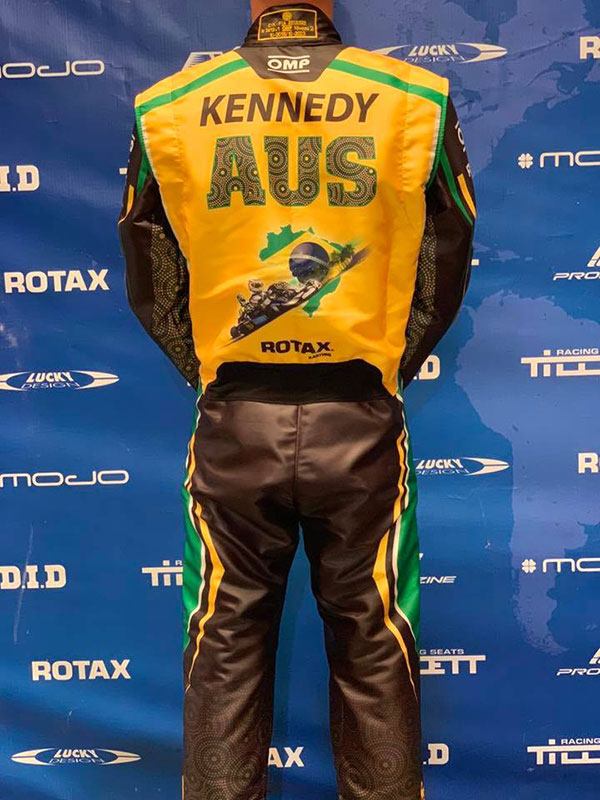