With just a single month passing since announcing the first race meeting, Kartsport SA put 61 karters on the track with many new and returning drivers alongside current sprint, dirt and super kart drivers. Those 61 drivers contested 450 racing laps and not one incident required the steward’s attention. Racing in all classes was clean and well contested and the comradery between drivers on the out grids and in grids and relaxed atmosphere in the pits was incredible. 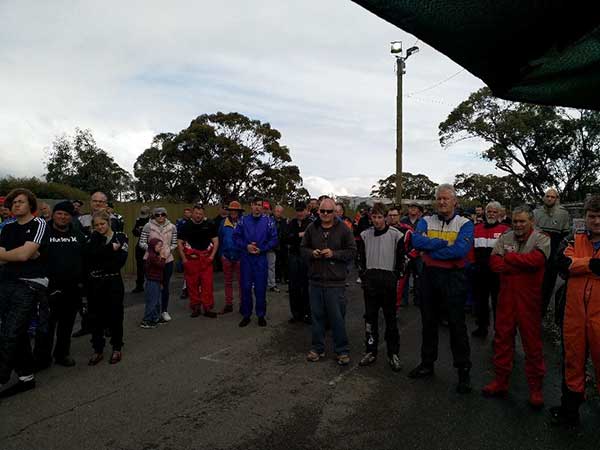 Race morning saw a wet track and cloudy conditions with the rain coming and going as the 61 drivers turned up with a variety of karts, motors and tyres in tow. The track varied from wet to damp for the 2 hours of practice but as luck would have it, once racing commenced the track dried out and stayed that way for the rest of the meeting. A total of 9 classes would contest the days racing which was made up of 5 heats of 10 laps. Random draw/draw reverse format would see gridding decided for heats 1 through 4 with points from those heats deciding the grid for the 5th and final race. 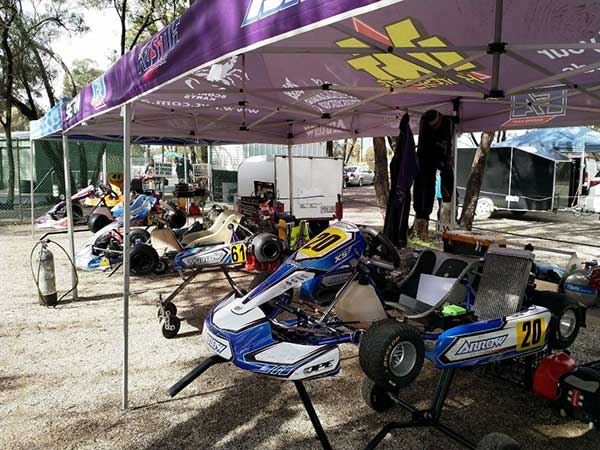 Mini Rok was the first class to take to the track. Ky Hubner taking the win after making a clean sweep in each of the races and well deserved after making the 4-hour trip down from Whyalla. Second place went to Alessia Calabro with Tyler Clark finishing third in his first ever race meeting and even scored himself an early birthday cake at presentation! Next up were the Clubman heavy drivers and 4 stroke drivers, on track together and with a mixture of tyres and experience, it made for some very interesting racing. 7 karts faced the starter and kept the spectators entertained for each of the races. Josh Wood was overall first with George Nesterczuk second and Tim Murphy driving a 4-stroke kart coming in third.

Third race was Junior J and Junior Open, with Whyalla’s Brayden Stewart’s running a KA100 with first place, the KT100J of Bradley Vaughan second followed by Declan Morrison driving a KT100S in third. It was Declan’s first race back on bitumen after several years of dirt kart racing and for the first 2 heats he went dirt racing again ending in DNF’s. It was good to see him finish 2nd for the final 3 races earning himself that 3rd for the day. We can’t wait to see the kid and junior classes grow in 2019. 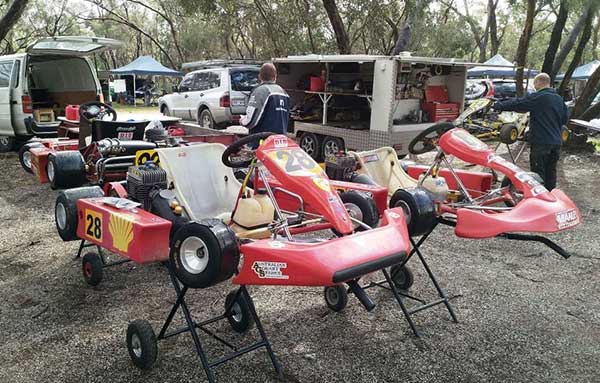 Next out was the return of Clubman Light. It was great to see and hear 10 Clubman light karts racing nose to tail around the tight Barossa circuit. Most drivers had come out of retirement for this event and did they did not disappoint. Matt Mahar was fast all day finishing in first place overall with the unlucky Matt Hall finishing in second overall after a DNF in the last race with 3rd place going to Alex Baker. These drivers raced hard, really hard! Some heart in mouth moments with up to 5 drivers fighting for track position into the final corner with barely a tyre rubbing! Every time these guys rolled out of the out grid you could see the collective rush of spectators to the fence lines. This class is one to watch. 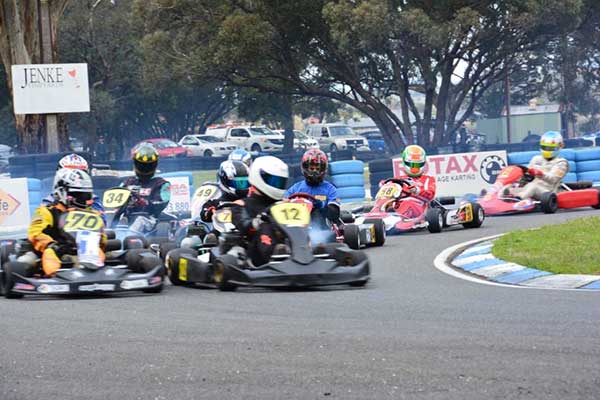 Another class that will be one to watch is the Statesman class. This class was popular in the old AKASA days with exhaust restrictors of varying sizes being used to factor in the driver’s weight. It meant that a restricted light driver could compete equally with a restricted super heavy driver. The long-anticipated return of this class saw 12 entrants for this meeting and we are confident it will grow to be one of our largest classes. Arron Jenner, the son of former AKA national president Kevin Jenner, came out of retirement and took home the honours closely followed by Barossa’s own president, John Ellis and third was Andrew Chapman, Barossa’s vice president. The final laps of the final race were and absolute standout, with Chapman pressuring Jenner lap after lap and the top 5 finishing virtually bumper to bar. 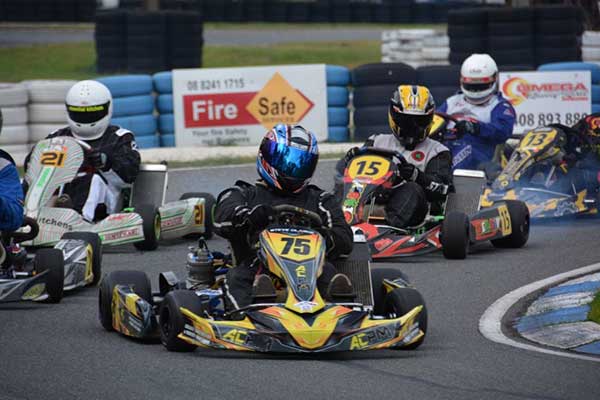 TaG Light and TaG Heavy went out together and with a few DNS’s and a few DNF’s in each heat it really mixed up the results. Chris Provan leaving with first on the night followed by Aaron Wilamowski in 2nd and Shane Wiseman in 3rd in the Light Calss heavy’s and Tyler Morrison 1st, Mark Lunn 2nd, Stephen Lovegrove and Michael Lovegrove in 3rd and 4th respectively in the light’s. Senior open saw a mixture of equipment on track from vintage right through to a somewhat temperamental twin rotax, when it all was said in done, it was Cameron Sniedze followed by Tim Harral and George Nesterczruk rounding out the top three.

Rounding out the classes were Restricted Light and Restricted Heavy. Simon Major was just too good with 4 race wins and a second. Johnny Twigden came a close 2nd and chased all the way by Wayne Freeman. This class provided plenty of close racing throughout the field. The Restricted Heavy class also saw some close racing but Aaron Gray was untouchable all day taking out 5 race wins and first overall. Kartsport SA’s own publicity man Mario Storti took out second overall with 3 second and 2 third place finishes. Shaun Field was third overall and ensured the night ended in spectacular fashion with a big shunt into the tyre barrier after his throttle stuck on. His kart was a little banged up but thankfully Shaun was ok and he still had a smile on his face! 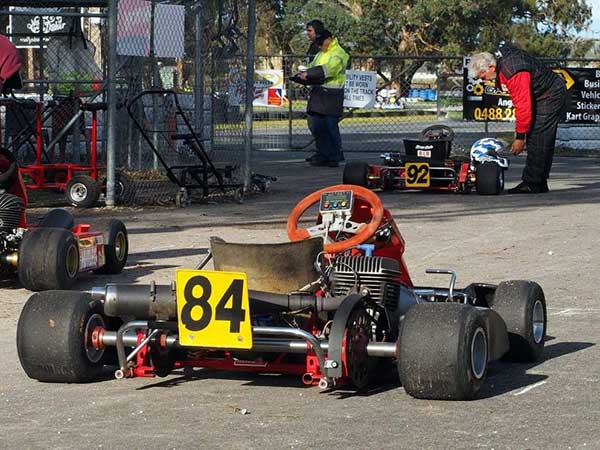 Feedback so far has been nothing but positive and interest has almost doubled! A big thanks must go to the Barossa Go Kart Club for allowing us to hire their facilities and for being the first SA club to support Kartsport SA. Also, to the volunteers that helped make the meeting happen. We had no shortage of people putting up their hand to help run the meeting and we had many officials and stewards also returning to karting to run this meeting. Kartsport SA would like to extend a huge thank you to all the competitors that came out to support us, it was great to see the pits full again, and seeing drivers, crews and families having fun racing their mates. We look forward to seeing you all in the very near future.

by Kartsport SA – By karters. For karters.