Porsche will support an electric kart championship in Germany in 2018. 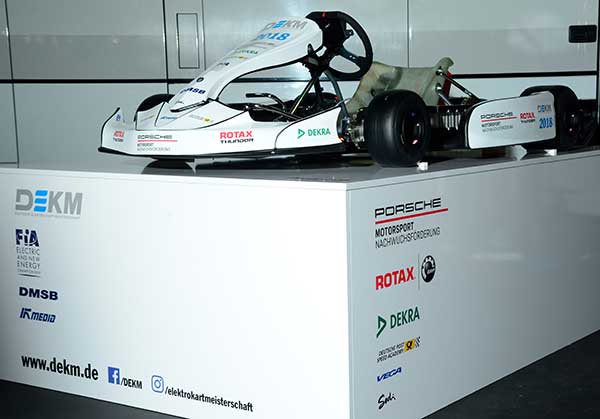 “We are pioneers in the field of electrified racing” said Dr Frank-Steffen Walliser, head of motor sports at Porsche.

“The Porsche 911 GT3R hybrid and the 919 hybrid are very successful witnesses to this work.

“Thus it is only consequent to support young talent at the grass-roots level too. DEKM is a contemporary and future-oriented opportunity for us to do so.”

Porsche Motorsport will support the best driver of the German E-Kart-Championship throughout the following year with a number of training programs.

“Supporting young talents has a long tradition at Porsche-Motorsport and has already produced a lot of professional race drivers and even several world champions. We therefore are very glad to also be able to pass our know-how onto the next generation of aspiring race talents” added Walliser.

Organisers say the five round series, run between May and September next year, is the world’s first all-electric kart championship.

It will cater for drivers 15 years and older and use the recently revealed Rotax THUNDeR kart (Rotax ePowerpack / Sodi Sigma DD2 chassis) on Vega tyres. The kart can accelerate from 0 to 100 km/h in 3.5 seconds and reaches a top speed of 130 km/h.

“It was thus a logical consequence for the DMSB to create a series with e-karts for the youngest racing talents in order to prepare the next generation of racers for this future-oriented technology.”

The series has further sponsorship from long-time supporters of German motorsport, DEKRA and Deutsche Post.