Vintage karting, or historic karting as it is known around the world, has become an activity for karters young and old to bring back the fun & enjoyment experienced by karting enthusiasts when the sport was at its most popular.

Queensland Vintage & Historic Karting Inc., the vintage kart club based in Brisbane, invited international karting personalties Terry Fullerton, Gert Munkholm & Ronny Lundberg to headline the second of the Australian Vintage Kart Prix to be staged at the Ipswich Kart Club’s circuit in the Qld Raceways complex at Willowbank on the outskirts of Ipswich.

Vintage karters from all over Australia & New Zealand brought their favourite karts & engines to run against the clock competing for the magnificent Terry Fullerton TT Trophy for 100cc karts and the Robert Harrison Memorial TT event for the 130-200cc machines once called 200 Supers.

There was plenty to see off track as well as on track with the “Karts Through Time” exhibition of karting history. Examples of every era of racing kart was on display with the centre piece a Birel T2/Komet K88 similar to that raced by Terry Fullerton to win the 1973 World Championship.

Karts from USA, England, Italy and Australia – both restored and as raced – were on display for the interest of visitors.

All vintage era karts from 1956 until 2000 ran demonstration events over the weekend while the gun drivers, including V8 Supercars driver Chaz Mostert, showed consummate skill in piloting their gleaming, lovingly restored, and expertly tuned machines at maximum speed in pursuit of the lowest time of the meeting.

Saturday was a day of testing, tuning & preparation during the demonstration runs for Sunday’s TT event finals.

The Era 3 & 4 drivers were competing fiercely for bragging rights at being top of the time sheets in their respective group.

The intent was as strong as at any race meeting from bygone days with such prestigious trophies & awards on the line.

The sound of the vintage kart engines churning out as much horsepower as had ever been extracted from them, the twisting contortions of the chassis struggling to hold the tyres on the road, and the sheer desperate exertion of the drivers was a delight to karting aficionados and the uninitiated alike.

Ipswich Acting Mayor, Paul Tully, after performing the official opening, stayed around to watch some of the action was heard to say “wow, the performance of those little machines is simply astounding!”

Terry Fullerton moved around the pits and kart displays signing autographs, catching up with past racing buddies and rivals, meeting adoring fans & taking in the atmosphere of the AVKP 2017.

Despite not being a driver these days, Terry attracted lots of attention wherever he went and along with wife Nilda & daughter, enjoyed our hospitality and the event immensely.

“This has been a very enjoyable experience & I would certainly come back when the next AVKP is held” Terry told me on Saturday afternoon.

The Gala Dinner is held at the Ipswich Civic Centre Theatre and again we were entertained and informed by highly respected motorsport commentator, Will Hagon.

A high quality function, a type not normally connected to karting, the Gala Dinner was for everyone to socialize and be entertained in sumptuous surroundings.

A highlight of the evening was the unveiling of the Fullerton Trophy for the Best of Show at the AVKP 2017. The unique aspect of the Fullerton Trophy kart competition was that every kart either competing or just for display was considered in the judging for the ultimate accolade of Australian vintage kart restoration & presentation.

The judges toured the pits & displays assessing the karts to select the ten best karts as finalists.

Terry Fullerton was enlisted to make the final selection of the winner, to be announced and unveiled on stage at the Gala Dinner.

The very deserving winner, Toby Hopton from Bundaberg, was selected for his simply stunning original restoration of a Kali Kart with Komet engine. The kart was unveiled with an unsuspecting Toby & family sitting in the auditorium. To say he was surprised was an understatement. He told the crowd he had only just put the finishing touches on it in the pit area that very morning.

The organization & staging of the AVKP 2017 was a momentous task ably undertaken by the QVHK Kart Prix group, approximately eleven in all. A member of that group, event secretary Raymond Harrison, has worked tirelessly and doggedly for more than eight months.

In recognition of his massive contribution not just to the event but to the club, Qld Vintage & Historic Karting Inc., and the vintage karting cause generally, he was presented with a Life Membership of QVHK by the great Terry Fullerton.

There followed a solemn interlude with an audiovisual tribute to karting people who have passed away since we were last together in 2014.

The show, then, moved into an interview session with Terry Fullerton, Gert Munkholm & surprise guest Chris Lambden, Terry’s one-time mechanic, journalist, and founding editor of the UK based Kart & Superkart magazine enjoyed by so many of us over the years.

Naturally, Terry was the focus of the show but his good friend Gert Munkholm wowed the audience with humour and colourful stories from his karting days with Dino & PCR.

Sunday, the final day, dawned fine and very warm with drivers concentrating on sharpening themselves & their machines for the final time trial competition later that afternoon.

The demonstration runs were spirited and drivers pushed their machines to the limit in a series of driving demonstrations of very high standard indeed.

The Era 5 karts in particular were very impressive.

One notable was Supercars driver and still regular kart driver Chaz Mostert piloting an Era 4 kart showing up quite a few of the more powerful Era 5 machines. Chaz showed he had lost nothing from his days on the kart track despite his day job driving the big V8 racers.

The final TT events were watched intently by the crowd and as they were teams of two events, the actual winners would not be known until presentation at the conclusion of the meeting.

Adam Mercer topped the time sheets on Saturday in an Era 5 kart.

Ultimately, the driver pairing of Josh Tynan and Nick Karavas dominated the Terry Fullerton TT and the Robert Harrison Memorial taking both top awards back to South Australia. 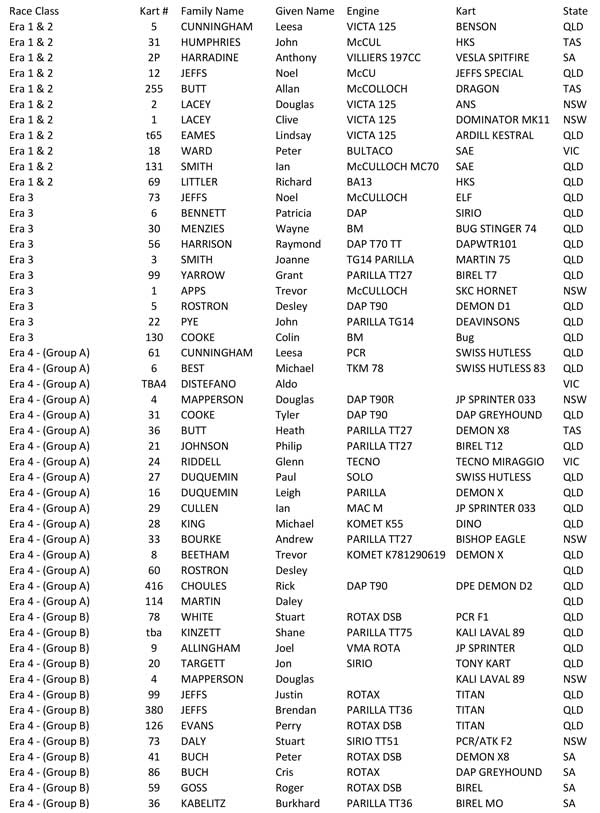 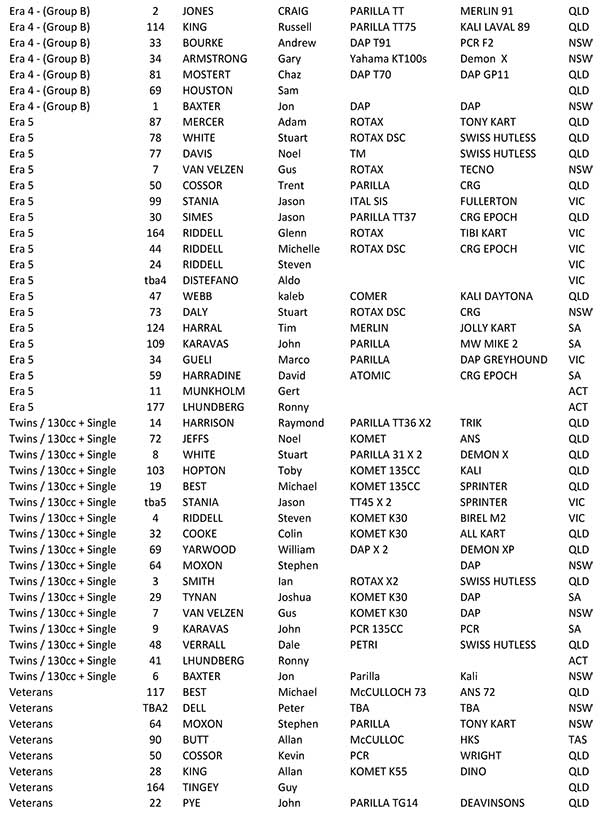