Australian Superkarter Jordan Ford experienced jubilation and frustration at the opening round of the European Superkart Championship at Donington on the weekend.

Competing in the Mono (single cylinder) class aboard Anderson/DEA, Ford outclassed his rivals to be fastest in qualifying (and 12th outright) before taking the opening race win, beating home nearest Mono rival Gavin Bennett by nearly 20 seconds and placing an impressive 9th overall.

Ford was looking good to register another win in Race Two, but reed valve failure whilst leading the opening laps forced him to pull over with no power.

Despite the DNF and racing a mono-engined kart, Ford is currently 12th outright in the European Championship!

The official CIK-FIA report and photos from the event are below.

In addition to the Euro round races, the British Superkart Grand Prix was also run and Ford was once again looking good for a win.

“It rained through laps two and three” Jordie told KartSportNews. “Then the track slowly dried and I went under lap-record pace until I started lapping karts.”

Then, while leading by a large margin on the last lap, an earth wire in the ignition broke, tumbling him down the order, crossing the line 6th.

“I’d let the whole race until the last lap… Gutted.”

The first round of the 2017 CIK-FIA European Superkart Championship, in very good weather, presented two faces at Donington. Although the progress of the two Races seemed to be true to predictions, the end result was very different because of several disasters in the first Race. The verdict was ultimately favourable to a Driver who only led for three laps but who scored maximum points. The Belgian Yannick De Brabander confirmed he could be counted on to disrupt the duel anticipated between the favourites Adam Kout and Peter Elkmann.

After the Free Practice and the first Qualifying Practice session, the German Peter Elkmann (Anderson / VM) was on top. With a time of 1’26”493, he left his opponents behind, starting with the outgoing Champion Adam Kout (MS Kart / DEA). The Briton Daniel Clark (Anderson / VM) was 3rd and his compatriot Jason Dredge (Anderson / PVP) surprised by his speed in 4th position. In the second Qualifying Practice session, Kout reduced slightly his deficit to 0.630” from the pole, while Yannick De Brabander (MS Kart / VM) recovered a place on the second row. In the CIK-FIA Superkart Mono Cylinder Cup, the Australian Jordan Ford (Anderson / DEA) was the fastest by a good margin with the 12th fastest time overall.

In the first Race, as usual since the beginning of the year, De Brabander was quick to start, but Elkmann kept control. They led Kout, Andreas Jost (Anderson / VM), Liam Morley (Anderson / DEA), then Dredge and Clark who started badly. Gradually the gaps widened between each competitor, and Jost was the first of the leaders to give up. Elkmann accentuated his lead over Kout who got the better of the Belgian. Behind, by five seconds already, were Morley, Clark and Dredge. Further back, the Finn Vesa Lethinen (MS Kart / VM) was leading a small group. The Race then turned into an elimination event. Dredge broke down, then Kout suffered a gearbox problem and gave up after mid-race. Elkmann’s lead over De Brabander was radically increased, with the Belgian being well detached in front of Morley and Clark who animated the end of the Race. Elkmann set a new record with 1’26”282, but, dramatically, he also retired, with the ignition off, on the 10th lap. De Brabander picked up an unexpected victory in front of Morley and Clark, who continued to compete for 2nd place to the chequered flag. Jordan Ford (9th) won the first Race in mono cylinder.

The second Race was more in line with expectations. Logically, the protagonists soon regained their rank. Elkmann and Kout escaped inexorably by quickly distancing De Brabander, himself ahead of Jost, Morley and Clark. Even further away, Lethinen was 7th, Maasmann 8th and Hulme 9th. Paul Platt (PVP / Gas Gas) took clearly the lead of the mono cylinders. Elkmann kept a steady rhythm, but Kout held the pace. As Jost slowed a little, Morley and then Clark overtook him. Farther back, Maasmann had taken the measure of the chasing group ahead of Hulme. The positions were frozen and the gaps widened. Elkmann improved his previous record to 1’26”257. The podium welcomed the victory by Elkmann ahead Kout and De Brabander. Clark, who had managed to overtake Morley, finished 4th closely behind the Belgian.

Yannick de Brabander has undeniably done everything right at Donington, already totaling 41 points thanks to his two podium finishes. Liam Morley (31 points) and Daniel Clark (29 points) also took advantage of the situation. Undoubtedly the fastest, Peter Elkmann remains the favourite for the Championship, but with Adam Kout keeping all his chances in view of his outstanding performances in Race 2.

The next Competition will take place at Assen (NLD) on 5th and 6th August. 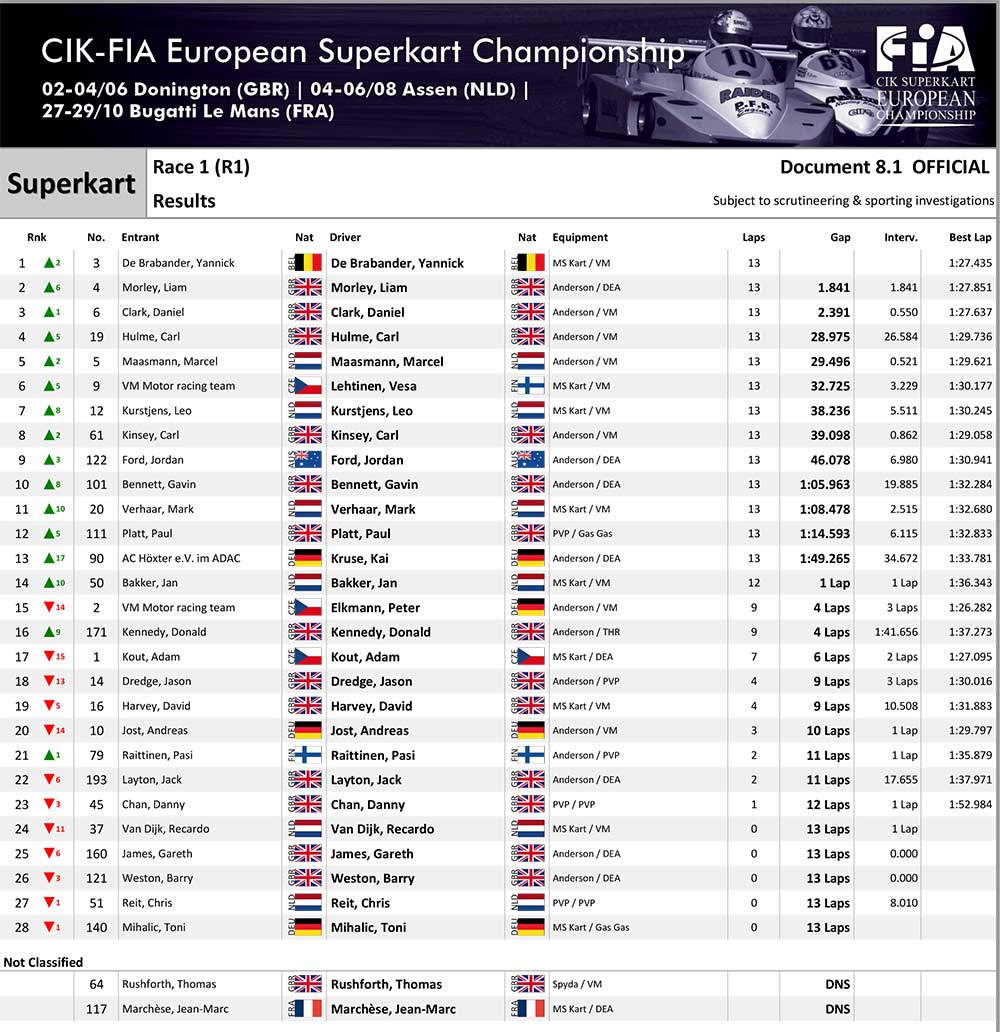 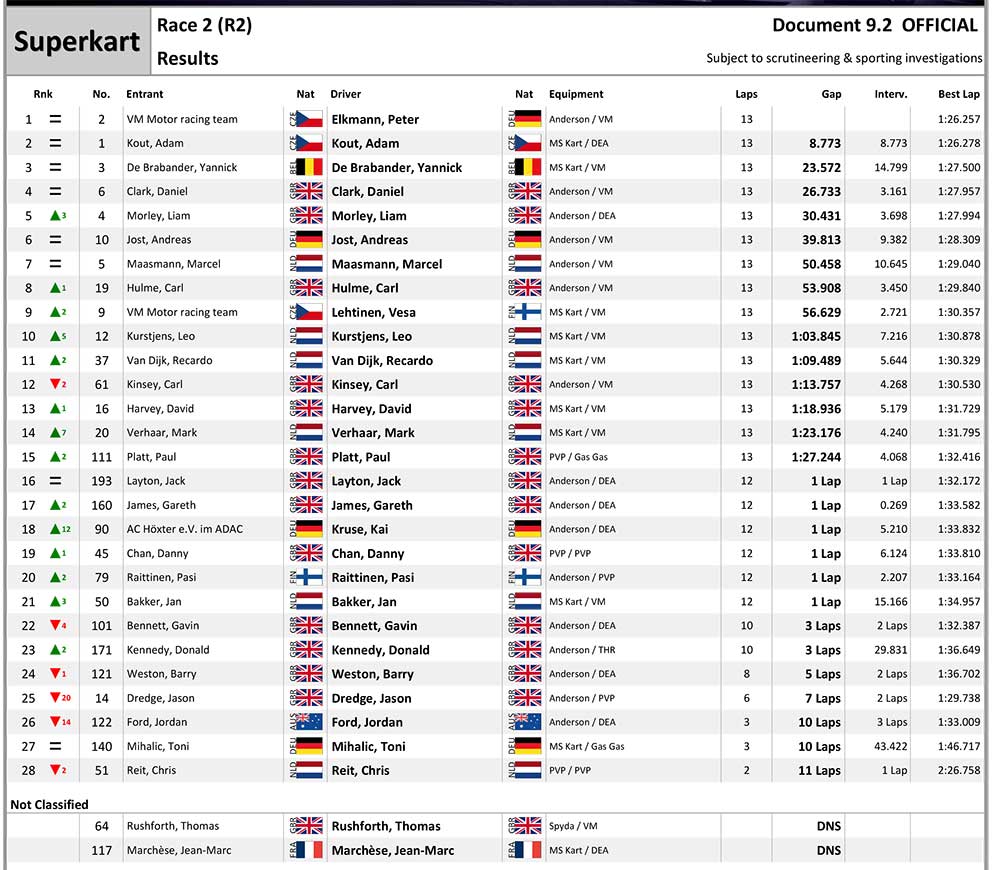